Public invited to free exhibit for the ‘Art of War’

The CGSC Foundation with support from the Todd Weiner Gallery in Kansas City will host an art exhibit entitled “The Art of War” at the City of Lenexa’s art gallery in City Hall (12350 West 87th Street Parkway, Lenexa, Kan. 66215). The exhibit will be on display from Feb. 28 – April 28. Access/admission to the exhibit is free during city hall normal operating hours. The public is also invited to a free reception to celebrate the exhibit from 6-8 p.m. on March 2.

The March 2 reception will open with a short program to enlighten attendees on the selections on display from the art and gift collection of the U.S. Army Command and General Staff College (CGSC) at Fort Leavenworth, Kansas. “The Art of War” exhibit is part of the CGSC Foundation’s initiative to preserve, promote, and protect the life and longevity of more than 3,800 items in the CGSC art and gift collection. Along with other items, this particular exhibit will feature a selection of military helmets and headgear from seven countries that were presented as gifts to the college.

The Command and General Staff College has been educating military officers for service to the nation since 1881. International military officers began attending the college in 1894. The CGSC art and gift collection traces its beginnings to 1943 at the height of World War II with a plaque from the Polish delegation attending the college. Gifts prior to that were not necessarily catalogued or maintained, however some gifts, such as a painted portrait of Confederate General Robert E. Lee donated in 1934 by the Daughters of the American Confederacy, still exist. In the 1970s, CGSC classes began a tradition of giving gifts to the college upon graduation. That tradition has taken many forms, from stained glass windows currently displayed in the Lewis and Clark Center (the home of CGSC), to original works of art presented annually on a topic chosen by the class. In addition, many of the international military student officers from each class annually gift the college with tokens of appreciation representing their country. In addition, visiting dignitaries and interested donors have gifted the college with works of art. Examples of these gifts range from a presidential portrait collection to bronze statues commemorating the military’s role in the war in Afghanistan.

Over the years CGSC has amassed a collection of gifts of art objects and other items that provides a physical representation of the historical significance between the college and the nations it serves. Until the “Art of War Initiative” began in summer 2016 with a partnership between the CGSC Foundation and the Todd Weiner Gallery, the general public has never truly had an opportunity to see this collection. The City of Lenexa exhibit represents only the second time selections from this collection will be on public display outside of Fort Leavenworth. 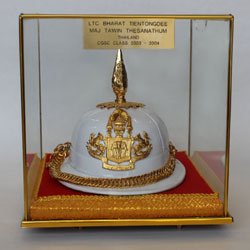 One of the helmets that will be on display in this exhibit is the “King’s Cap,” (shown at right), which was presented to the college in 2004 by the military officers from Thailand who graduated from CGSC that year. “King’s Cap,” like many pieces in the collection, features elements unique to each country. Emblazoned on the front of the cap is the emblem of Thailand highlighting a mythical creature that has been used as symbol of royalty for centuries. The Garuda is a mythological beast of Hindu and Buddhist tradition that came to symbolize the divine power and authority of the king. The King’s Cap is representative of the collection of invaluable art objects in this collection.