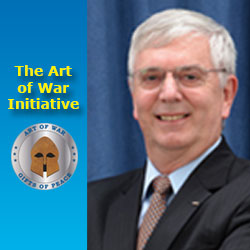 The Art of War logo is based on an actual gift given to the college by the Chief of Hellenic Army General Staff Lieutenant General Manoussos Paragioudakis who served as chief of the Greek Army from 1999-2002. The Corinthian helmet and its associated history have made it a very publicly recognizable symbol of strength over the years. The blue color of the text in the logo is the blue color in the chevron of the CGSC crest. This blue is symbolic not only of the blue in the CGSC crest, but it carries any number of other meanings in military history.  Blue is the U.S. Army Infantry/SF color; blue is the primary recognizable United Nations color; and last, but certainly not least, blue in the U.S. flag signifies “vigilance, perseverance & justice.” The silver/metallic background is symbolic of strength, purity, truth, peace, and sincerity. The three stars in the logo are symbolic of the level of command (The CGSC commandant is a three-star general) at the College. The College is also operating in its third century (founded in 19th, matured in the 20th, growing in the 21st century). The three stars are also symbolic of the rank of founding chairman and current chairman of the Foundation, both of whom are 3-star generals who served at Fort Leavenworth.

The “Art of War Initiative” will be formally rolled out to the public here shortly. We are excited to be able to team with the Todd Weiner Gallery in Kansas City in putting together a long term project that focuses on CGSC’s vast collection of art and gifts. Many of the objects are displayed throughout the college on the walls and in the display cases in the Lewis and Clark Center and throughout the campus. But, that is only a fraction of the total collection and the objects that are on display could use some context and information so that our students and faculty could learn more about them.

The first public exhibit was last September at the Weiner Gallery in Kansas City with a “First Friday” opening event. The latest public exhibit is at the Lenexa City Hall beginning March 1 and running for two months. These exhibits are designed to  educate the public about the College using the art objects as the medium. As I travel the area in meetings with corporations and even local governments, the lack of knowledge about the college, the international military student program, and everything about the Army is truly astounding. By helping to share the collection with the public, we hope to expand the knowledge in the larger community about the richness of the programs that go on here at CGSC and Fort Leavenworth.

The initiative will also help generate funds for Foundation operations. We are asking individuals, corporations, and other foundations to help us raise the funds to do all of the tasks we’ve set out to achieve and to help us support ongoing Foundation programs. We have set a three year goal of three million dollars  in order to achieve our vision.

In order to better explain the project, we have established a website – theartofwarinitiative.org. We hope you will visit this site to explore opportunities to become better informed and to support the initiative with your time, talent and treasure as you are able. We hope you’ll visit the upcoming exhibit during it’s time at the Lenexa City Hall and that you will consider getting involved with the initiative.