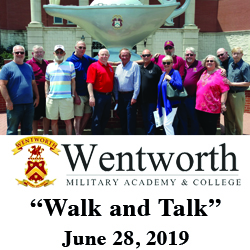 On June 28, the CGSC Foundation, along with Mr. Ralph Erwin, the National Geospacial-Intelligence Agency liaison to the U.S. Army Training and Doctrine Command and the Combined Arms Center at Fort Leavenworth, hosted a group of Wentworth Military Academy alumni on a visit to Fort Leavenworth and the Lewis and Clark Center, home of the U.S. Army Command and General Staff College. 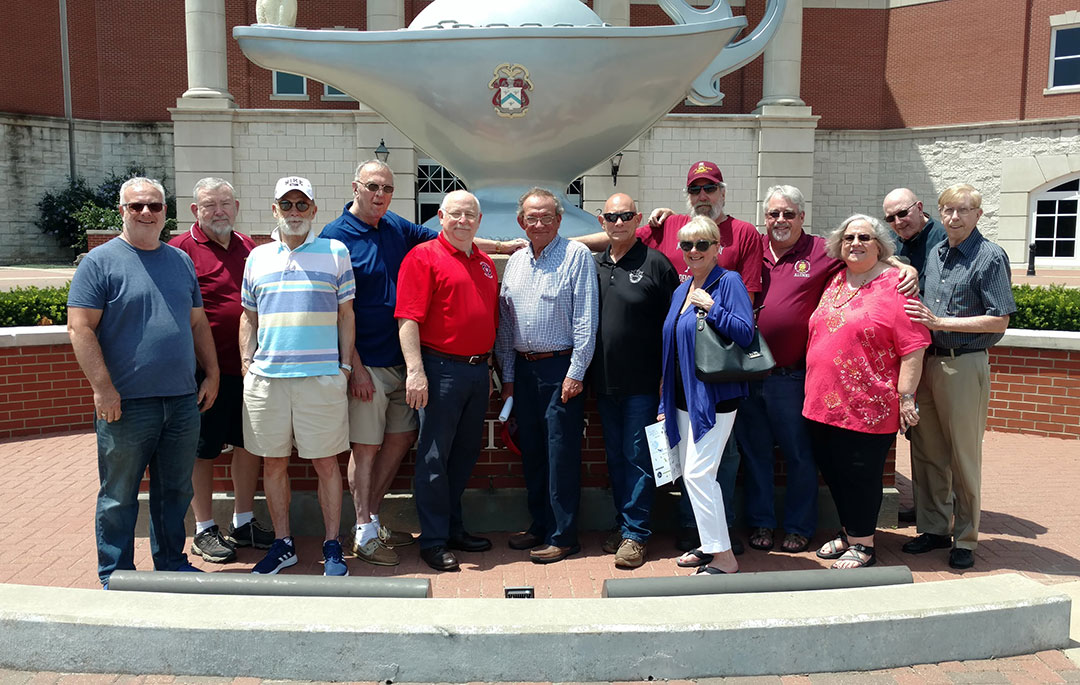 Ralph Erwin (center, red shirt) and his fellow Wentworth Military Academy alumni pose for a photo in front of the Lamp of Knowledge at the Lewis and Clark Center.

Erwin is himself an alumnus of Wentworth Military Academy and volunteered to facilitate a visit by a group of his fellow alumni to Fort Leavenworth. Wentworth was a private two-year military college and high school in Lexington, Mo., which was founded in 1880, but closed in 2017.

Foundation President/CEO Rod Cox began the visit with a tour of historic Fort Leavenworth. The group visited the original campsite of Col. Leavenworth in 1827; the Main Parade Field; several historic homes, including the Rookery, which was the home of the first territorial governor and later Douglas MacArthur; the National Cemetery; the Buffalo Soldier Monument; and the Berlin Wall Monument.

After the post tour Cox took the group to the Lewis and Clark Center. During a luncheon in the historic Bell Conference Room, Cox and several CGSC interagency faculty members provided briefings to the group on the CGSC Foundation and the various intelligence agencies of the U.S. government. The interagency faculty briefings included information on the Defense Intelligence Agency, the Central Intelligence Agency, and the National Geospatial-Intelligence Agency. The visit concluded with the group visiting the Fort Leavenworth Hall of Fame and having their picture taken in front of the famous Leavenworth Lamp, the College’s symbol of the enlightenment gained and knowledge learned while at CGSC.

The CGSC Foundation periodically conducts tours of Fort Leavenworth and the U.S. Army Command and General Staff College to assist the U.S. Army with their outreach mission and to connect the general public with our Army and its activities at Fort Leavenworth. For more information contact Joan Cabell, CGSC Director of Development – joan@cgscf.org.