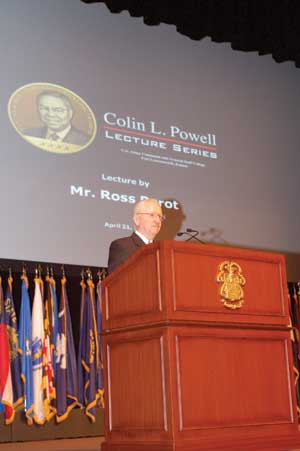 Ross Perot, right, converses with Brig. Gen. Edward Cardon, deputy commandant of the U.S. Army Command and General Staff College, during a visit to the college, Oct. 20. The CGSC Foundation sponsored the visit after which Perot elected to contribute $6.1 million to two new programs the foundation is establishing in support of CGSC.

“The Lewis and Clark Center was magnificent,” Perot said. “But I really enjoyed my time with the Soldiers in class and at lunch. They’re all heroes everyday for what they do for our country.” Ross Perot, seated right, participates in class discussion with CGSC Professor Bud Meador and students, during his visit to the College, Oct. 20, 2009.

Upon making the decision to support a center for interagency cooperation and the chair in ethics, Perot himself selected the persons to name them for, rather than have them named after himself, which the foundation had planned to do.—He elected to name the center for the study of interagency cooperation after retired Colonel Arthur “Bull” Simons, who led the 1970 Son Tay Raid to free prisoners of war in Vietnam. Simons also led a mission in 1979 (during his retirement) to rescue two of Mr. Perot’s employees from a prison in Teheran. Perot elected to name the chair in ethics after a close personal friend and renowned leader, retired Army General Hugh Shelton, former Chairman of the Joint Chiefs of Staff.

“The Col. Arthur D. Simons Center will break new ground in development of improved cooperation and understanding of interagency affairs,” Deputy Commandant of the College, Brig. Gen. Edward Cardon, said. “This is an area of increasing importance to the College and the Army. The Gen. Hugh Shelton Chair in Ethics will add significantly to our ability to enhance the College’s focus on ethics.”