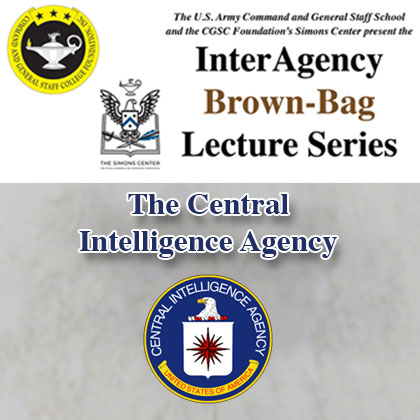 Kirsten Krawczyk, the CGSC Distinguished Chair for National Intelligence Studies, led a discussion on the organization, mission, and U.S. military relationship with the Central Intelligence Agency (CIA) in the second presentation of the InterAgency Brown-Bag Lecture Series for CGSC academic year 2022 on Oct. 20, 2021.

CGSC Foundation President/CEO Rod Cox provides welcome remarks and introduces the speaker at the InterAgency Brown-Bag Lecture on Oct. 20, 2021 in the Arnold Conference Room of the Lewis and Clark Center on Fort Leavenworth.

Krawczyk provided a brief history of the CIA, from the OSS, to the National Security Act of 1947, to the Intelligence Reform and Terrorism Prevention Act of 2004. She said the CIA is among 18 agencies that now comprise the U.S. intelligence community. She further explained the CIA’s three main missions – intelligence collection, all source analytics, and covert action – and clarified the CIA’s role when working with the Department of Defense. She said the CIA is not a combat support agency and has limits to the degree of analytical and operational support they can provide to DoD. She explained that the CIA’s Associate Director for Military Affairs (ADMA) role is to act as a liaison between the CIA and DoD to facilitate and coordinate support between the two.

Krawczyk recommended two books that provide insight into CIA operations – Good Hunting, by Jack Devine, and Subordinating Intelligence: The DoD/CIA Post-Cold War, by David Oakley, a graduate of CGSC and SAMS in 2019.

At the conclusion of the presentation, Krawczyk conducted a brief Q&A with the attendees, covering topics from who is “in charge” when the CIA and DoD have missions in the same area, to who supports CIA operatives where there is no DoD presence, and the work-life balance within the CIA.

Krawczyk is a retired U.S. Naval Officer with assignments that included carrier-based deployments as a Naval Flight Officer (NFO) on the E-2C Hawkeye command-and-control aircraft, and staff assignments at the U.S. Naval Academy, Joint Forces Air Component Command (JFACC), and with CNO Operations and Plans. As an intelligence officer, she completed tours in the Middle East and South America, along with multiple temporary duty assignments in warzones. Her most recent assignment is with the Associate Director for Military Affairs (ADMA) focusing on intelligence liaison and instruction in support of the U.S. military. Krawczyk holds a Master of Arts degree in National Security Studies from Georgetown University and a Bachelor of Arts in Political Science from the U.S. Naval Academy.

Editor’s Note: While this brown-bag lecture was not classified, Krawczyk requested the CGSC Foundation not publish photographs of her during the presentation.