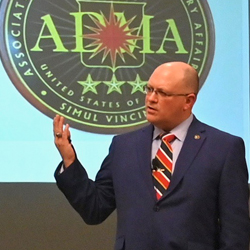 Mr. Kevin Rousseau, the CGSC Distinguished Chair for National Intelligence Studies and a member of the Central Intelligence Agency (CIA), led a discussion about the CIA’s organization and mission during the InterAgency Brown-Bag Lecture conducted Oct. 10, 2019, in the Lewis and Clark Center’s Arnold Conference Room.

Mr. Kevin Rousseau, the CGSC Distinguished Chair for National Intelligence Studies and a member of the Central Intelligence Agency (CIA), leads a discussion about the CIA’s organization and mission during the InterAgency Brown-Bag Lecture conducted Oct. 10, 2019, in the Lewis and Clark Center’s Arnold Conference Room.

Rousseau covered a bit of the Agency’s history and spoke in plain terms about its mission to an audience of nearly 100 students, faculty and members of the community. Throughout his presentation Rousseau chuckled as he went to his prepared notes, saying he was checking to ensure he stayed on track and didn’t stray into any classified information.

Regardless of whether the information was classified, Rousseau’s presentation was well received by the audience.

“It’s not every day you get to hear about the CIA from an actual CIA rep,” one attendee said. “We get the fact he can’t talk about all the supposed ‘juicy’ information, but just gaining an understanding and some insight at this level makes it very interesting.”

At the end of his presentation, Rousseau recommended several books for further reading, one of which was A Practitioner’s Handbook for Interagency Leadership published by the CGSC Foundation Press.

Rousseau is a retired U.S. Army officer with assignments that included service with the 82nd Airborne Division, the 3rd Armored Division, and the Joint Staff J-2. He has multiple deployments to the Balkans and to Afghanistan. At the CIA Rousseau has served as an analyst, an instructor, and manager. His most recent assignment was as the briefer to the CIA’s Associate Director for Military Affairs. He has a bachelor’s from the United States Military Academy, a Master of Science in Strategic Intelligence from the Defense Intelligence College, a JD from the George Mason University School of Law, and a Master of Military Art and Science from the U.S. Army School of Advanced Military Studies.

Rousseau’s presentation was the third lecture in the series for academic year 2020. The next lecture is set for Nov. 26, 2019, with a presentation on the Federal Executive Board.