CGSS Students meet with Undersecretary of the Army 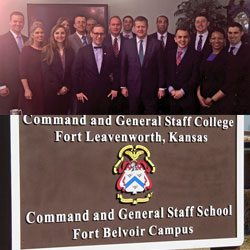 The U.S. Army Command and General Staff School (CGSS) students and faculty of Staff Group 30D, of the Fort Belvoir Satellite Campus Class 18-001, attended a meeting and working lunch Feb. 2, 2018, with Undersecretary of the Army Ryan D. McCarthy at the Pentagon. 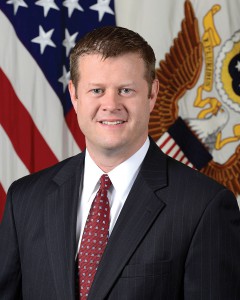 Undersecretary of the Army Ryan McCarthy

Maj. Pat McGuigan, a Staff Group 30D student who recently completed an assignment as a legislative assistant to Undersecretary McCarthy while assigned to the U.S. Army’s Office of Congressional Legislative Liaison, planned the meeting for the group.

The event supplemented the CGSS curriculum that the students are learning in the “Common Core Course.” The “C200 – Strategic Context,” portion of the curriculum provided them with how the U.S. Army fits into the National and Department of Defense Strategy and Policy development and execution. Undersecretary McCarthy’s comments explained how these strategies and policies help shape “The Army Plan,” which is the strategic document that guides the Army. The “L100 – Leadership, Developing Organizations and Leaders” curriculum was discussed by the Undersecretary in the area of “Organization Power and Influence.” He described that success in his position is heavily influenced by relationships with members of the Department of Defense and Congress. The “F100 – Managing Army Change,” curriculum was referred to by Undersecretary McCarthy describing how strategic documents signed by the president, the secretary of defense, and the chairman of the joint chiefs of staff influence the Army’s strategic document, “The Army Plan.”

During the meeting/working lunch Undersecretary McCarthy described the current challenges that he and the Department of the Army leadership are working on solving. Following his update, the undersecretary answered questions from the students on a wide range of issues.

Undersecretary McCarthy concluded the lunch by presenting each CGSS student and faculty member with an Undersecretary of the Army coin to commemorate their visit. Mr. Katz and Mr. Kormos reciprocated by presenting the undersecretary with a CGSS Belvoir Satellite Campus Coin as a token of their thanks.

Students of the current CGSS class at the Fort Belvoir satellite campus gather for a group photo during their meeting Feb. 2 at the Pentagon with Undersecretary of the Army Ryan McCarthy (front/center right).