The Army establishes The Army University 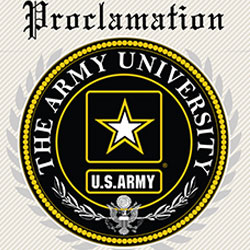 Over the next two years, the Army University will develop new processes to facilitate student and faculty collaboration and exchanges with civilian universities, establish universal transcripts, centralize and improve faculty development programs, and implement common core curriculum across the spectrum of Army education.

The creation of Army University represents a revitalization of the Army’s professional military education system and is the first major step in transforming the Army into the innovative force needed to build the Army of 2025 and beyond.

“The Army University is the next logical step in the continued professionalization of the Army that began with the creation of the All-Volunteer Force in 1973,” said Gen. Raymond Odierno, the Army chief of staff.  “This effort organizes all of TRADOC’s existing educational programs into a single university structure to promote greater academic rigor, to improve internal integration, and to enhance external collaboration with many of the Nation’s best universities and colleges.”

Army University will provide the Force with a single point of contact for all Army education matters to address the educational needs of the Army while providing individual Soldiers and Civilians the opportunity to accomplish their own respective academic goals.  In addition, Army University will work closely with the U.S. Army War College at Carlisle, Pa.; the Warrant Officer Candidate School at Fort Rucker, Ala.; the Command and General Staff College at Fort Leavenworth, Kan.; and the U.S. Army Centers of Excellence to leverage capabilities for training and research.

“We must continue to educate and develop Soldiers and Civilians to grow the intellectual capacity to understand the complex contemporary security environment to better lead Army, Joint, interagency and multinational task forces and teams,” said the Honorable John McHugh, Secretary of the Army.  “Therefore, we will reinvest and transform our institutional educational programs for our Soldiers, commissioned officers, warrant officers, and noncommissioned officers in order to prepare for the complex future security environment.”

“Soldiers are the Army’s ‘smart’ weapon systems,” explained Perkins. “The Army University is critical to training our civilian and military leaders to ‘win in a complex world.’ Providing this unified, professional and quality educational structure enables collaboration among our current educational institutions and facilitates innovation across our Army and support to the Joint Force.”

Additionally, this effort provides a cost savings to the Army in tuition assistance and unemployment expenses, which improves a Soldier’s ability to transition into quality employment opportunities after their service.