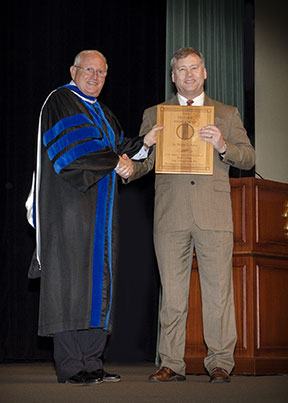 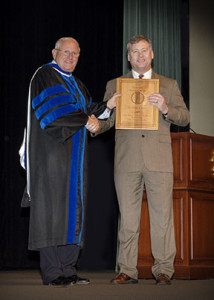 The CGSC Foundation is proud to announce that Dr. Phillip G. Pattee, an associate professor in the Department of Joint, Interagency and Multinational Operations, is named as the CGSC Foundation Person of the Month for July-August 2015.

As the next class of CGSC students prepares to start classes for academic year 2016, it is only fitting that one of their professors is publicly recognized for his achievement.

The U.S. Army Training and Doctrine Command selected Dr. Pattee as its “Educator of the Year” and presented him with the award in a ceremony at the TRADOC headquarters in Fort Eustis, Va., in May. He was subsequently recognized for his achievement during the CGSC Class of 2015 graduation ceremony at Fort Leavenworth in June.

Dr. Pattee was selected for this honor from among thousands of instructors throughout TRADOC. The pool of eligible candidates was narrowed to 70 who teach at the various centers of excellence and Army schools throughout TRADOC, the National Guard and Army Reserve. Of the final 70, seven were selected for demonstrating exceptional technical knowledge, communication skills and classroom management techniques. As “Educator of the Year” Pattee was the top awardee.

Pattee is a retired U.S. Navy submarine officer who teaches strategy and military operations at CGSC. He previously served on the faculty of the U.S. Army War College. He holds a Bachelor of Science in mechanical engineering from the University of Washington and a doctorate degree in military and diplomatic history from Temple University. He is the author of At War in Distant Waters: British Colonial Defense in the Great War.