Foundation Treasurer is Person of Note 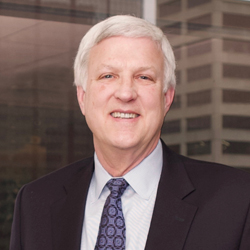 The CGSC Foundation has selected Terrance “Terry” J. Lillis, the Foundation’s treasurer, as the Person of the Month for September 2020.

“Terry has been a great member of our Foundation since he joined us as a trustee in August 2018,” said Foundation President/CEO Rod Cox. “During his service on our board he has been very active – he served on and now chairs the Finance and Investment Committee, serves on the Development Committee, and previously chaired the Audit Committee. In August this year he accepted our nomination and was voted in as our treasurer. We couldn’t be more fortunate to have someone with his experience helping us not only manage, but grow the Foundation.”

Lillis retired in 2017 as executive vice president and chief financial officer with the Principal Financial Group in Des Moines, Iowa. He began his civilian career after serving in the U.S. Army in the Republic of Korea, and receiving his bachelor’s degree from Simpson College and his master’s degree in actuarial science from the University of Iowa. He is a member of both the American Academy of Actuaries and the Society of Actuaries.

“Terry not only serves on various committees and now serves as our treasurer, but he is also a financial sponsor for our National Security Roundtable series, our premier outreach program,” said Cox. “He believes it is very important that we conduct outreach activities like the NSRT that connect the College/military with the civilian community…and he has put his own personal financial support into the program. His level of commitment is one to truly be admired.”

Cox also noted that Lillis hails from the Des Moines, Iowa area, a region that has provided great support to the Foundation and the College over the years.

The CGSC Foundation is proud to honor Terry Lillis. His leadership and dedication to the Foundation mission are truly deserving of our “Person of the Month” recognition for September 2020.