Educators of the Year are Persons of the Month – July 2018 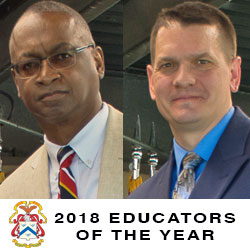 The CGSC Foundation has selected the CGSC Educators of the Year – Mr. Dwayne Wagner and Lt. Col. Brian Steed (now retired) – as the “Persons of the Month” for July 2018.

“Simply stated, I was surprised in my selection as [military] educator of the year, said Steed. “I have a quirky and unorthodox style of thinking and teaching. Not the type
usually recognized by a military organization. It is a tremendous honor.” 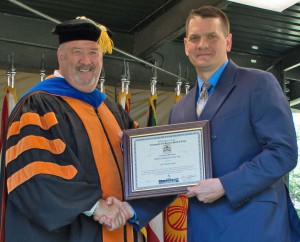 Lt. Col. (R) Brian Steed, right, accepts the award for the 2018 Military Educator of the Year from CGSC Dean of Academics Dr. Jim Martin during the CGSOC graduation ceremony on June 15, 2018. 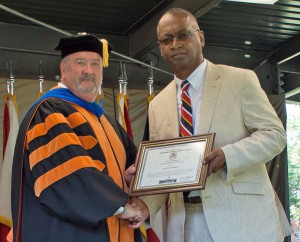 Mr. Dwayne Wagner, right, accepts the award for the 2018 Civilian Educator of the Year from CGSC Dean of Academics Dr. Jim Martin during the CGSOC graduation ceremony on June 15, 2018.

Steed’s career in the Army was definitely not the “norm.” He was an armor officer and a Middle East foreign area officer who spent eight and a half consecutive years in the Middle East, including an assignment as an officer in the Jordanian Armed Forces as part of a U.S. Army personnel exchange program, and as a liaison to the Israel Defense Force – assignments which afforded him rare perspective. His experiences obviously shaped his approach as an instructor until his retirement in March 2018, after four years in the CGSC military history department.

“Brian is the nearest thing to an American Lawrence of Arabia I have personally met,” said Wilburn “Bud” Meador, one of Steed’s colleagues in the department of military history. “He is bright, engaging, an Arab linguist, and exceptionally qualified to speak on circumstances in the Near East from times of antiquity to current events – and do so with intimate knowledge of the personalities, faiths, politics, geography and international entanglements in the region.”

“Teaching at CGSC is an honor because the students provide the greatest teaching environment imaginable,” Steed said. “They are experienced and yet humble. They want to learn and many want to change. Maybe most importantly, they will
use what they are taught which is both intimidating and invigorating. This is not simply an exercise in philosophy or conceptual understanding. Teaching at CGSC is about helping people to do things better.”

Like Steed, Wagner, the recipient of the civilian educator of the year award, is also a retired Army officer and has been a CGSC instructor since 2008. He expressed similar humility in being selected for the award.

“In 1973 my counselor told me not to go to college,” said Wagner. “Both my high school and college are closed and I come from an academically deficient background. The Army gave me an opportunity to obtain a fully funded graduate degree, attend the FBI National Academy, and study at SAMs for two years in the senior service college fellowship. Being selected Civilian Educator of the Year makes me feel humble, blessed, and vindicated, because I (and others) continue to show that someone from a weaker academic background can compete well.”

Wagner’s selection for the award was made by Fort Leavenworth leadership, but many of his students felt he was an outstanding instructor regardless.

“He is a brilliant professor. – When it comes to national strategy and policy at the highest level he understands it better than most policy makers,” said Maj. Bill Hardwick, a student in the CGSC Class of 2018 that graduated June 15. “Even with his knowledge, Mr. Wagner never pushed a viewpoint, but instead encouraged us to always think for ourselves. He always encouraged us to question conventional wisdom and the status quo. Our entire class often talked about how lucky we were to have him.”

Maj. Jessica Farrell, also a member of the class of 2018, said, “[Mr. Wagner] proactively sought contributions from each member of our small group and had an impressive ability to synthesize diverse thoughts in a way that helped our collective understanding. He did a great job of meeting each and every student where he or she was in the learning process. He is also committed to the difficult task of providing meaningful feedback to students.”

“Teaching has allowed me to help future leaders become better thinkers, writers and briefers, and conversely, I have learned from my students,” said Wagner. “This synergy better prepares me for future instruction.”

The CGSC Foundation is proud to salute Mr. Dwayne Wagner and Lt. Col. (Ret.) Brian Steed for their commitment and accomplishments. They are more than deserving of our “Persons of the Month” recognition.