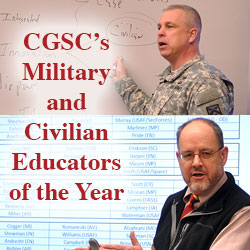 The CGSC Foundation has selected the CGSC Educators of the Year – Dr. Jack Kem and Lt. Col. Christopher Johnson – as the Persons of the Month for January 2017. 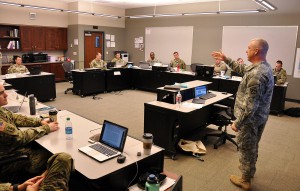 Command and General Staff College Military Educator of the Year Lt. Col. Christopher Johnson, Department of Military History, gathers feedback from his Command and General Staff Officer Course students about what stood out in their reading as something that should be covered in the class Dec. 8 at the Lewis and Clark Center on Fort Leavenworth. – photo by Prudence Siebert/Fort Leavenworth Lamp

Seven civilian educators and six military educators were among the candidates competing for the honor to represent CGSC faculty at the TRADOC level. A selection board evaluated the 13 educators Nov. 9 and 17 as part of the award process.

“The CGSC award selection process was fairly comprehensive and evaluated us across the range of teaching domains,” Johnson said. “For example, the board evaluated our teaching philosophies, our classroom management, and conducted a panel-style board to ask us questions about our approach toward education.”

Kem said the award selection process included several steps that began with his first being selected by DJIMO as the departmental Educator of the Year. That selection was based upon a nomination and vetting process within his department by the curriculum developers, division chiefs and senior members of the faculty.

“First of all, I was surprised. The competition for Educator of the Year includes a lot of dedicated and professional faculty members, both civilian and military. As a result, being selected is a great honor,” Kem said. “Secondly, I realize that the TRADOC Civilian Educator of the Year (award process) will also have tough competition. It is my hope that I can represent the CGSC faculty well in that competition.”

Kem added that his packet included a detailed summary of key contributions, challenges encountered as a faculty member, faculty certifications, and an assessment by the DJIMO department director.

Johnson, who also won the CGSC Military Educator of the Year award in 2014, described a similarly rigorous process. There were also five different classroom observations by senior CGSC leaders, followed by a selection board chaired by the dean of academics.

“As an educator, I am always looking for ways to connect with my students and to help them develop their learning strategies. From a personal standpoint, I am working on my Ph.D. in history at (the University of Missouri-Kansas City),” Johnson said. “I felt surprised and honored to be selected as the Military Educator of the Year. CGSC has great instructors who are passionate about their mission and their students. It is an honor to represent the faculty and the students going forward to the TRADOC competition.” 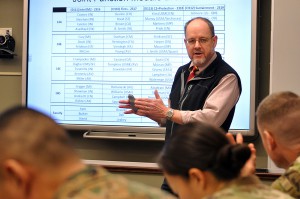 The Department of Military History, where Johnson teaches, educates students in critical thinking skills and equips them with historical perspectives that make them better prepared to achieve the national objectives in war and peace. The DMH develops subject matter curriculum, including courses in the CGSOC common core.

“I am the history instructor for Team 08 of the Command and General Staff Officer Course. I am responsible for teaching military history to approximately 60 CGSOC students,” Johnson said. “Our classes discuss military history and how it relates to being a better professional military officer.”

Kem teaches within the Department Of Joint, Interagency And Multinational Operations, which develops curriculum designed to educate officers in the planning and execution of joint, multinational, and interagency operations during peace, conflict, and war, with emphasis at the operational level of war. DJIMO is also responsible for developing curriculum in the CGSOC common core. The two specialty tracks of Joint Advanced Warfighting Studies and Special Operations Forces are unique to DJIMO.

“I teach a wide variety of classes, chair master’s committees, lead a scholar’s seminar, participate in service to CGSC, and conduct research and write professional articles. Most importantly, I feel that I make a difference,” he said.  “Upon graduation, our students have the awesome opportunity to lead in the military profession — they will lead the greatest soldiers, sailors, airmen and Marines in their countries.”

Kem, who has supervised more than 100 master’s theses and 12 major research studies, spoke to the high-level aptitude and quality of his students from his perspective as teaching team leader and supervisory professor. He said he believes CGSC educators are in a serious business that ultimately affects the future of countries that send students to CGSC.

“As a CGSC educator, I have the awesome opportunity to enable these future graduates. I get to teach the best of the best,” Kem said “As an educator, my goal is to continue to make a difference, to stay close to the classroom and the officers who I am privileged to teach — and to have fun at the same time.”

The CGSC Foundation is proud to salute Dr. Kem and Lt. Col. Johnson and wish them well in the TRADOC-level competition.

(This is an edited reprint of the story by Christopher Burnett published in the Fort Leavenworth Lamp Dec. 15.)