Educators of the Year selected Persons of the Month for January 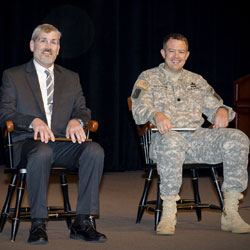 For their selection and award as Educators of the Year, the CGSC Foundation names Assistant Professor Kevin E. Gentzler from CGSC’s Department of Command and Leadership and Lt. Col. Christopher Springer from the Department of Joint, Interagency and Multinational Operations (DJIMO) as the Persons of the Month for January 2016. 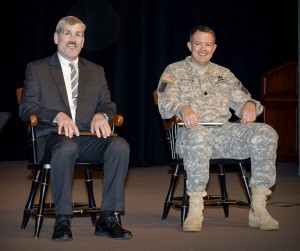 Assistant Professor Kevin E. Gentzler from CGSC’s Department of Command and Leadership and Lt. Col. Christopher Springer from the Department of Joint, Interagency and Multinational Operations (DJIMO) are the CGSC Foundation’s Persons of the Month for January 2016. They were each provided a CGSC chair from the Foundation in recognition of their selection as CGSC’s Educators of the Year.

In a ceremony Nov. 24, CGSC recognized Gentzler as the Civilian Educator of the Year and Springer as Military Educator of the Year. Gentzler and Springer were two of the seven civilian and six military faculty members that were nominated from the various departments and schools within CGSC based on their excellence in the four domains of teaching, service, scholarship and faculty development. The candidates were observed teaching and also interviewed by a five-member selection board. Now that they’ve won at the College level, they will represent CGSC as nominees in the U.S. Army Training and Doctrine Command’s Educators of the Year selection process.

Both winners received the coveted premium front row parking spots outside the Lewis and Clark Center entrance and a College chair from the CGSC Foundation.

Gentzler, a former U.S. Army attack aviation/finance officer and alumnus of the CGSC Class of 1999, joined the CGSC faculty in July 2008 immediately after his retirement.

“Personally, this award means a lot because I know the caliber of instructors who have won in the past,” said Gentzler. “I am proud that I might be considered in those ranks. Professionally it validates my decision to begin this part of my life.” 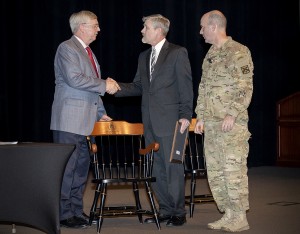 Foundation CEO Doug Tystad and Deputy Commandant Brig. Gen. John Kem (right) congratulate Mr. Kevin E. Gentzler from the Department of Command and Leadership upon his selection as 2015 Civilian Instructor of the Year.

Gentzler, a Joplin, Missouri native, has a B.A. in Business Administration from Missouri Southern State University and a master’s in Organizational Leadership from Regent University in Virginia Beach, Virginia. He is currently working on his dissertation for a Ph.D. in Management from the University of Phoenix.

Springer is originally from Westfield, Indiana and graduated from West Point with a commission as an artillery officer. He also holds a Masters in Business Administration from Washington University in St. Louis and graduated from CGSC in 2008. He has been an assistant professor in DJIMO since June 2013. He previously served as a Rand Arroyo Fellow in Washington, D.C. and has also served on the economics faculty of West Point. 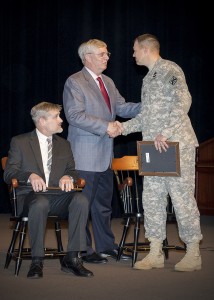 Foundation CEO Doug Tystad congratulates Lt. Col. Christopher Springer and presents him with a College chair upon his selection as 2015 CGSC Military Instructor of the Year.

“This recognition is definitely an honor because I have such admiration for so many of my colleagues here at CGSC,” Springer said. “From a personal perspective, I am honored that my department recognized my hard work over the last few years.”

Both Gentzler and Springer have served in Iraq and realize the gravity of their tasks as faculty members of CGSC helping to educate the next generation of leaders. When asked what they try to convey most to their students, their responses reflect the wisdom that leaders and educators of the year should have.

“The most important thing I try to get across to my students is that in the next phase of their career, not everything has an answer,” Gentzler said. “They have to develop their thinking skills and work on relationships in order to be successful and to find the best answer to tough problems.”

“My most important message to students at CGSC is to ask them to think beyond this year and their next assignment,” said Springer. “I ask them to instead think about how this year can enhance their own knowledge in their long-term careers and how that knowledge will help them take care of the brothers and sisters-in-arms they will be working with the rest of their lives.”