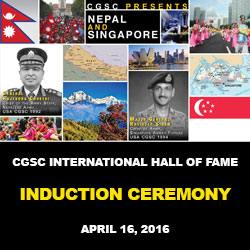 Gen. Rajendra Chhetri of Nepal and Maj. Gen. Ravinder Singh of Singapore were inducted into the International Hall of Fame during a ceremony in the Eisenhower Auditorium at the Lewis and Clark Center. Lt. Gen. Robert Brown, commanding general of the Combined Arms Center and Fort Leavenworth and CGSC commandant, presided over the ceremony.

Chhetri is a 1992 graduate of the Command and General Staff College at Fort Leavenworth. Singh attended the CGSC in 1994.

The International Hall of Fame honors CGSC graduates who go on to attain top leadership positions in their country’s armed forces.

Singh was unable to attend Tuesday’s ceremony but was represented by Maj. Luke Goh, a CGSC student from Singapore.

• Read the full story in the Fort Leavenworth Lamp

• View the CGSC Public Affairs photo gallery for photos from the ceremony.