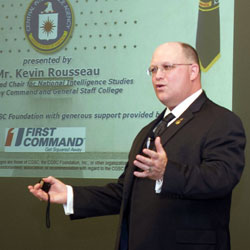 The Mr. Kevin Rousseau, the CGSC Distinguished Chair for National Intelligence Studies and a member of the Central Intelligence Agency (CIA), provided insight into the CIA in the latest presentation of the InterAgency Brown-Bag Lecture Series on April 3, in the in the Arnold Conference Room of the Lewis and Clark Center on Fort Leavenworth. 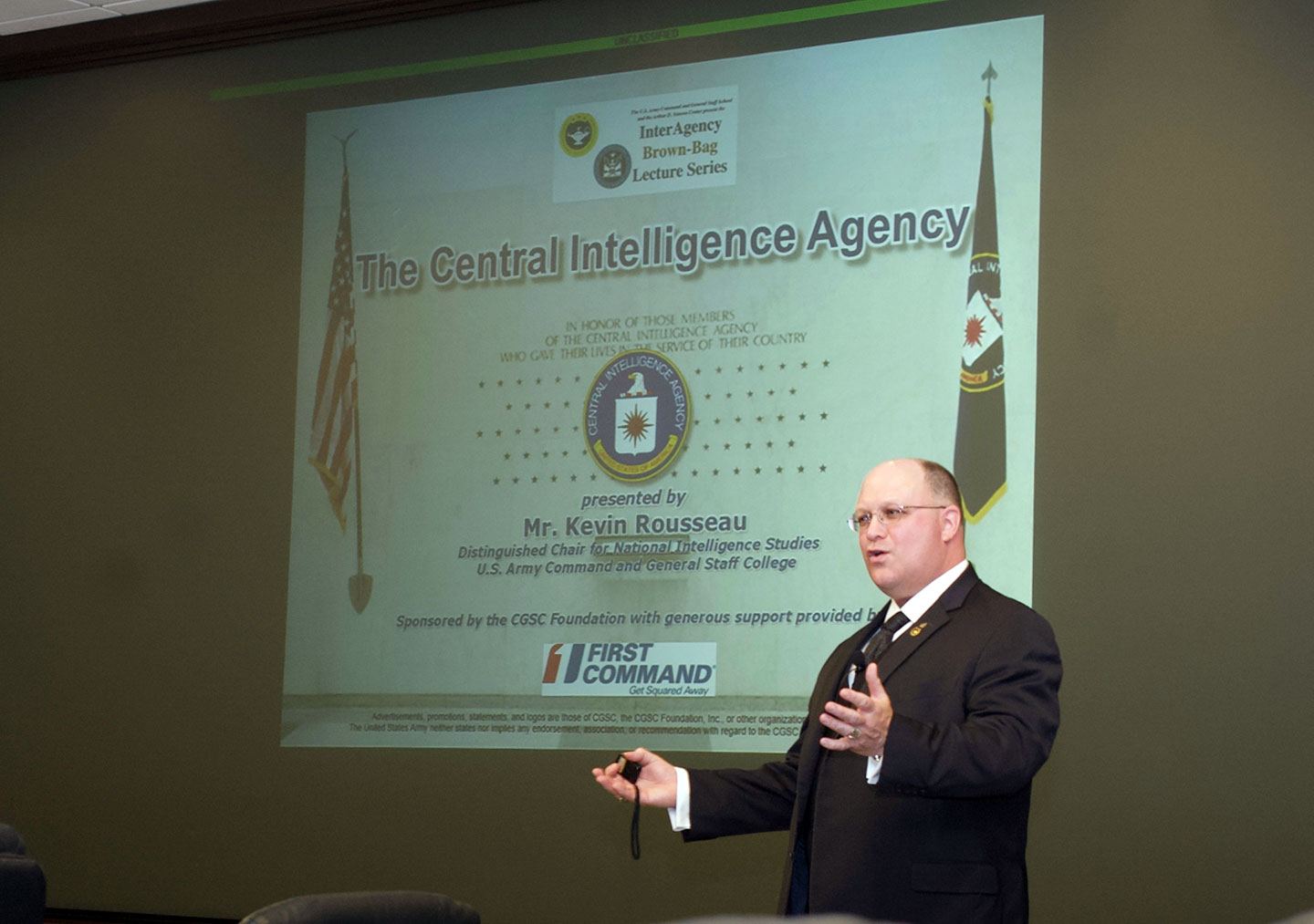 Kevin Rousseau, the CGSC Distinguished Chair for National Intelligence Studies and a member of the Central Intelligence Agency (CIA), begins his presentation on the CIA during the InterAgency Brown-Bag Lecture on April 3, in the in the Arnold Conference Room of the Lewis and Clark Center on Fort Leavenworth.

Rousseau touched on the history and mission of the CIA and how the CIA and its operations are overseen by the Senate Select Committee on Intelligence (SSCI) and the House Permanent Select Committee on Intelligence (HPSCI). He also walked the attendees through the CIA’s organization in its five directorates – Analysis, Operations, Science and Technology, Digital Innovation and Support – and its Mission Centers that integrate the range of the CIA’s capabilities from the directorates to tackle security problems. Throughout his presentation, to the extent that he could with security constraints, Rousseau offered examples and also recommended books for the attendees to read.

Some of the books he recommended were:

During the question and answer session at the close of his presentation, Rousseau spoke about recent changes in how the CIA educates and trains their personnel, citing the influence of former CIA director and U.S. Army General David Petraeus, who called for the CIA to become “a learning organization” like the Army. Petraeus graduated from CGSC in 1983, and served as the Commanding General of Fort Leavenworth from 2005 to 2007.

Rousseau is a retired U.S. Army officer with assignments that included service with the 82nd Airborne Division, the 3rd Armored Division, and the Joint Staff J-2. He has multiple deployments to the Balkans and to Afghanistan. At the CIA Rousseau has served as an analyst, an instructor, and manager. His most recent assignment was as the briefer to the CIA’s Associate Director for Military Affairs. He has a bachelor’s from the United States Military Academy, a Master of Science in Strategic Intelligence from the Defense Intelligence College, a JD from the George Mason University School of Law, and a Master of Military Art and Science from the U.S. Army School of Advanced Military Studies.

The InterAgency Brown-Bag Lecture Series is co-hosted by the CGSC Foundation’s Simons Center with the U.S. Army Command and General Staff School (CGSS). The series is an extracurricular, interagency topic-focused series that is intended to help enrich the CGSS curriculum. The presentations are scheduled each month. – The next lecture is May 8 and will focus on the Federal Executive Board. The CGSC Foundation and the Simons Center have received support for all brown-bag lectures in academic year 2019 from First Command Financial Services in Leavenworth, Kansas.

The next lecture in the series is scheduled for May 8 and will focus on the Federal Executive Board in Kansas City.