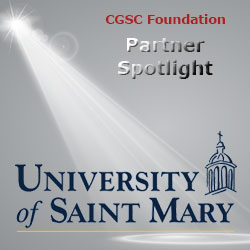 The University of Saint Mary is selected as the CGSC Foundation Corporate Partner for March 2016.

The University of Saint Mary is currently a sponsor of the DACOR (Diplomatic and Consular Officers Retired) Distinguished Visiting Professor of Diplomacy program that the Foundation administers in support of the U.S. Army Command and General Staff College. Dr. Karenbeth G. Zacharias, the director of the Lawrence D. Starr Global Studies Institute at the University of Saint Mary is the champion for the CGSC Foundation-USM relationship.

DACOR – Diplomatic and Consular Officers Retired – is a Washington, D.C.-based organization comprised of retired, former, and active duty members of the diplomatic, consular or Foreign Service of the United States. The CGSC Foundation coordinates for visiting professors, typically retired U.S. ambassadors, from the DACOR membership. According to Tystad, the partnership with USM makes the program much more financially achievable while also broadening its reach.

“We couldn’t be more pleased than to have Karenbeth and USM involved with our program,” said Doug Tystad, CGSC Foundation CEO. “Having her Global Studies Institute at USM engaged with our DACOR visiting professors is a win-win. – Students at CGSC and USM benefit from our partnership and the visiting professors are very receptive to it.”

The University of Saint Mary is a four-year Catholic liberal arts university founded by the Sisters of Charity of Leavenworth in 1923. USM offers daytime undergraduate and doctoral classes at its main campus in Leavenworth, online classes, and accelerated undergraduate degree-completion and graduate classes in the evening at its Overland Park Campus. The USM mission is to educate students of diverse backgrounds to realize their God-given potential and prepares them for value-centered lives and careers that contribute to the well being of our global society.

The Princeton Review has repeatedly named the University of Saint Mary a “Best Midwestern College” every year since 2005. The distinction is based on meeting lofty standards of academic excellence and feedback from students, parents, educators, and Princeton Review staff.

For more information about the University of Saint Mary visit www.stmary.edu.