Webster University, with a campus location on Fort Leavenworth, is selected as the CGSC Foundation Corporate Partner for June 2016.

Katie Ervin, Midwest Regional Director, Webster University, has been the driving force for Webster’s support of the CGSC Foundation mission.

“Since Katie attended our National Security Roundtable in March 2016, she has really come alive with ideas on how she and Webster can get more involved with us,” said Foundation CEO Doug Tystad. “Through Katie’s efforts, Webster has come on board with us to support our ‘Mission Support’ program, which includes support for guest speaker programs, support to our satellite campuses, the annual British/U.S. exercise Eagle-Owl, support for exercises and staff rides in SAMS and School for Command Preparation, and other similar programs. We’re absolutely thrilled about having them on board to make all these things possible.” 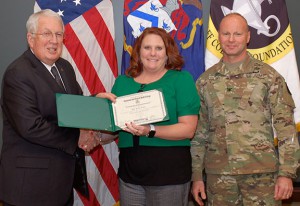 According to Foundation Director of Development Joan Cabell, Webster has also already locked in a sponsorship for the 2016 Celebration of International Friendship, the Foundation’s premier gala event that welcomes and celebrates the new class of international military officers at the Kauffman Center for the Performing Arts in September.

Webster University is a private, nonprofit university with its home campus located in St. Louis, Mo. Webster has more than 17,000 students studying at campus locations in North America, Europe, Asia and Africa and in a robust learning environment online. Webster University opened its first military campus in 1974 and has been providing educational programs to the military for more than 40 years. Webster’s Fort Leavenworth campus celebrated its 20th anniversary in 2015.

This month Webster University will confer 194 degrees to military students who are also part of the 2016 CGSOC graduating class. These 194 will receive their Webster University degree on June 8 and graduate CGSOC on June 10. According to Ervin, the Fort Leavenworth Webster campus also has an additional 187 students who are not yet graduating, but continuing their education online, or are government civilians or other community members.

“We are also offering an accelerated summer term beginning July 25,” Ervin said. “This will allow incoming students to complete one class before their CGSOC classes begin. They’ll attend class three nights a week for three weeks and get their class credit.”

Ervin added that the faculty are professionals in their fields and that more than 65 percent are retired military members. She said Webster University offers cooperative master’s degree programs in partnership with 42 professional military and Department of Defense schools, including the Army Command and General Staff College. These cooperative degree programs provide transfer credit for military-taught courses.

The CGSC Foundation is proud to spotlight Webster University for their support of the Foundation and the military community.