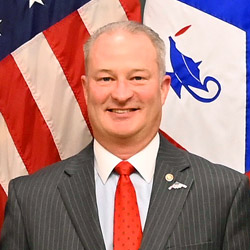 The CGSC Foundation has selected Patrick C. Warren, Civilian Aide to the Secretary of the Army (CASA) for Kansas City and president of Kansas Speedway, as the Person of the Month for February 2020.

Patrick C. Warren, Civilian Aide to the Secretary of the Army (CASA) for Kansas City and President of Kansas Speedway

Warren has been president of Kansas Speedway since 2010 and was sworn in as the CASA for Greater Kansas City in August 2019.

“Pat Warren is one of the newest CASAs appointed by the Secretary of the Army to serve in a priority city,’ ” said Foundation President/CEO Rod Cox. “Kansas City is one of the Army’s priority cities for recruiting and because of his connections to the community and the visibility of his position with the Kansas Speedway, he is an excellent choice for the job. As part of helping him get connected with the military we invited him to attend our National Security Roundtable Program in October 2019. We’re grateful he spent some time with us and the great faculty and students here at CGSC, and we look forward to working with him however we can in the future.”

Each state, the District of Columbia and the five U.S. territories have one or more CASAs appointed to provide a vital link between the Army and the communities for which they serve. CASAs are usually business or civic leaders who possess a keen interest in the welfare of the Army and their communities.

“One of the greatest opportunities I have had in my career at Kansas Speedway is meeting people who have chosen to serve our country,” Warren said after taking the CASA oath Aug. 16, 2019, at the Pentagon. “I am honored to have the opportunity to serve in a different capacity as a CASA for the Greater Kansas City area and look forward to working with the Army to achieve Secretary McCarthy’s priorities.”

Warren is a graduate of the University of Kansas with an undergraduate degree in Political Science followed by a Juris Doctorate. After law school he worked in the KU Athletics Program for eight years and then left KU to attend the University of Chicago Booth School of Business, where he received his MBA with concentrations in Finance and Marketing in 2004. He joined Kansas Speedway in 2006 and was promoted to president in 2010. He received Fort Riley’s highest honor for private citizens, the Distinguished Trooper Award, in 2015 in recognition of his work with soldiers at the base. Warren has served in leadership roles in a variety of civic organizations including the board of directors for the Kansas City, Kansas Chamber of Commerce, Wyandotte County Economic Development Council, and Sunflower House. He currently serves on the board of directors of the Kansas Chamber of Commerce and is an active member of the Whiteman Air Force Base Community Council.

The CGSC Foundation is proud to highlight Patrick C. Warren, Civilian Aide to the Secretary of the Army (CASA) for Kansas City and president of Kansas Speedway, as the CGSC Foundation “Person of the Month” for February 2020.