After nearly two years of research, letter writing campaigns, visits to Congress and phone calls, the Command and General Staff College Foundation has finally succeeded in shepherding the “5-Star General Commemorative Coin Act” through the House and the Senate with the requisite number of cosponsors. The President signed the bill into law on October 8, 2010. 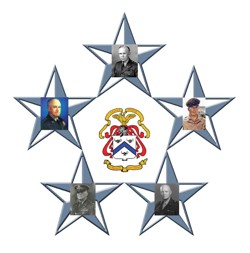 “This is a very significant event in the life of the Foundation,” said Bob Ulin, CGSC Foundation Chief Executive Officer. “Not only have we succeeded in getting the Foundation and by extension, the College, on the radar screen of our political leadership, the proceeds from the sale of these coins will produce a stream of income that will ensure our viability in supporting CGSC for generations to come.”

Approval of the coin bill authorizes the U.S. Mint to issue up to 100,000 five dollar gold coins, 500,000 one dollar silver coins, and 750,000 half-dollar copper-nickel clad coins during 2013 to honor the U.S. Army Command and General Staff College and the critical role it has performed in educating military leaders who have served with honor and distinction for 130 years. The Foundation will work with the mint’s artists to develop the final designs, which will honor the nation’s five, five-star generals who led our forces to victory in WWII and all of whom are graduates of CGSC. Once the U.S. Mint recoups its costs from the sales of the coins, matching funds become available to the Foundation for all of the funds the Foundation has raised since opening its doors in February 2006—potentially millions of dollars.

The House version of the bill passed with 300 sponsors and the Senate version with 73 cosponsors. According to Ulin, key to the effort in garnering support in the final stages of the senate bill were the efforts from the Kansas senators, Pat Roberts and Sam Brownback.

“The Command and General Staff College is a first class center of excellence for leadership development and arguably the most prestigious military staff college in the United States,” Senator Roberts said. “After many years of perseverance, I am pleased the Congress and the President approved legislation to honor this institution and five outstanding five-star generals. Thank you to all at Fort Leavenworth who made this possible.”

“Without Sen. Roberts and Sen. Brownback’s support we may not have met the standard for cosponsors in the Senate,” said Ulin. “Representatives Dennis Moore, Jerry Moran, Lynn Jenkins and Todd Tiahrt from Kansas and Rep. Leonard Boswell from Iowa were also key in raising support in the House.”