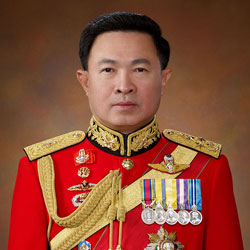 The Command and General Staff College inducted General Surapong Suwana-adth, Chief of Defense Forces for the Royal Thai Armed Forces, into its International Hall of Fame on July 11 at 9 a.m. at the Lewis and Clark Center. The induction brings to 271 the number of leaders who have been honored in the Hall of Fame from the more than 8,000 international officers who have graduated from the college. The 271 inductees represent 72 different nations, and of the 271, 15 have become either the head of state or the head of government in their respective nations. 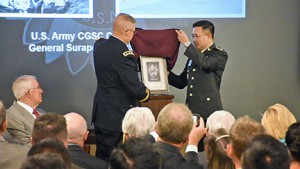 CGSC Commandant Lt. Gen. Michael Lundy and Gen. Surapong Suwana-adth, Chief of Defense Forces, Royal Thai Armed Forces, unveil the portrait of Surapong that will be displayed in the CGSC International Hall of Fame in the Lewis and Clark Center.

Surapong is an alumnus of the CGSC Class of 1994 in which he was also the recipient of the Eisenhower Award (The Eisenhower Award is presented to the top international officer in each CGSC class and is currently endowed by the CGSC Foundation’s David Beaham Memorial Fund.). He is one of 295 graduates from Thailand since 1946 and one of 228 to achieve general officer rank. Surapong is the 32nd Chief of Defense Forces of the Royal Thai Armed Forces. He assumed command of the Royal Thai Armed Forces on 1 October 2016.

“We’ve had over 250 Thai officers come through CGSC…The relationship we have between our two nations is very special, said Lt. Gen. Michael Lundy, CGSC commandant and Combined Arms Center commander. “We’ve built a foundation of trust between our nations and that is really embodied by whom we are inducting today.”

“Today is a day to remember for me and my family,” said Gen. Surapong. “I feel most honored to be inducted into the CGSC International Hall 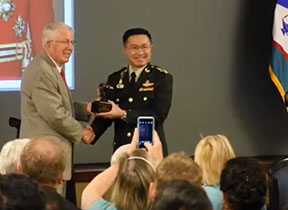 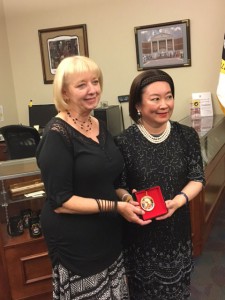 of Fame. I know and respect so many of the previous [inductees] and their accomplishments…and I am honored and pleased to follow in their footsteps.”

Surapong said that Thailand began sending officers to CGSC in 1946 and since that time there have been 293 Thai grads. There are two Thai officers in the current class.

Surapong also added that many of the Thai CGSC alumni have achieved great success in their military careers and have been designated to important political and military positions, including four prime ministers, 14 ministers, eight defense secretaries, eight chiefs of the defense force, five commanders in chief of the Royal Thai Army, and 228 of them have made it to the rank of general.

“It is such a special privilege to be back and receive this honor at Fort Leavenworth, a place so special to me in my heart, a place that helped shape me into what I am today. I am so grateful for that,” said Surapong. “Fort Leavenworth is also where I gained valuable knowledge, immeasurable experience and of course, enduring friendships. The ties of friendship fostered here have also allowed the military officers from many countries and of many nationalities to network and build a community based on mutual trust and understanding. Indeed we benefit from such friendship and togetherness in times of crisis which contribute to the regional, as well as the global peace and stability.” 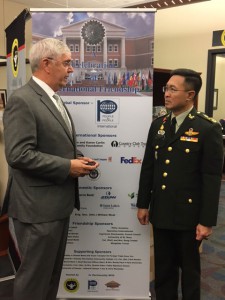 In his closing remarks, Gen. Surapong added, “Please rest assured that I will do my best in my capacity to further strengthen the cordial ties between our two armed forces as well as our two nations, which has flourished for nearly 200 years.”

During his visit to CGSC Gen. Surapong and his wife also visited the CGSC Foundation office and gift shop where they purchased some CGSC mementos. Foundation CEO Doug Tystad presented the general with a Foundation coin and Foundation Director of Operations Ann Soby presented his wife with a holiday ornament. Tystad and the U.S. Defense Attaché who was accompanying the general also had the opportunity to speak about future opportunities with the Foundation and the Thai staff college.

The CGSC International Hall of Fame was established in 1973 jointly between CGSC, the Greater Kansas City Chapter of the Military Order of the World Wars and the CGSC Foundation, In addition to being inducted into the Hall of Fame, inductees are presented a CGSC certificate of honor by the Military Order of the World Wars and a Life Constituent Certificate by the Foundation. Officers from 72 countries have been inducted into the hall. Fifteen International Hall of Fame members have gone on to be head of state in their country.

International military student participation in cooperative military studies in the United States originated at Fort Leavenworth with the arrival of Swiss Lieutenant Henri Le Comte in 1894. Since then, international students, representing 165 countries to date, have become an integral part of the Fort Leavenworth experience. These talented military officers contribute to a rich professional and cultural exchange environment.

For more photos from the ceremony visit the CGSC Flickr album

Gen. Surapong was granted a scholarship from the Royal Thai Army to study at the Virginia Military Institute and obtained a Bachelor of 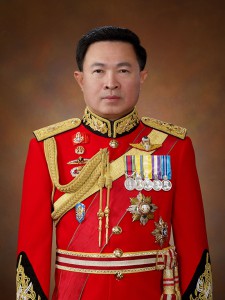 Science in Physics in 1978. He was commissioned as an Artillery Officer in the Royal Thai Army before he continued his studies and earned a Master of Science at the University of Virginia in 1980. In 1981, he was assigned as an Instructor at the Chulachomklao Royal Military Academy and completed the Royal Thai Army’s Command and General Staff College in 1990. After that, he served as an Instructor at the Thai Command and General Staff College and then attended U.S. Army CGSC at Fort Leavenworth where he earned a Master of Military Art and Science degree in 1994.