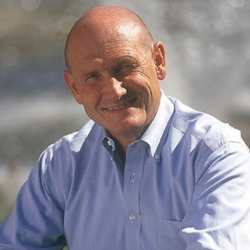 Top photo and above: Hyrum Smith delivers his “Power of Perception” presentation to the assembled CGSC class of the Command and General Staff College on Feb. 4, 2015 in Eisenhower Hall of the Lewis and Clark Center on Fort Leavenworth. (photos courtesy CGSC Public Affairs) Smith is most well known as the founder of the industry leading time management solutions company Franklin-Quest in 1983 and is one of the creators behind the popularly used Franklin Day Planner. He was also the founder and president of the Galileo Initiative. He was elected as a CGSC Foundation trustee June 16, 2006, and was later elected president of the Foundation’s board of trustees June 25, 2008. He resigned in January 2013 after nearly seven years service on the Foundation board.

Former Foundation trustees and some of those still involved with the Foundation remember Smith as a fiery speaker, full of optimism and never short of an anecdote that could both entertain and change lives.

When speaking about the Foundation, he typically said, “History has shown that a society that ceases to care about its own defense is one that ultimately ceases to exist at all. I believe that the Foundation’s purpose of supporting CGSC is key to our national security.”

In one of his other popular pitches about the Command and General Staff College and the CGSC Foundation, Smith said, “Since becoming a trustee of the CGSC Foundation and now its president, many people have asked me why I am involved. The answer is simple: I love the Army and what it stands for. In addition to that the Command and General Staff College is one of the only remaining institutions of higher learning that has the guts to teach values. If you tried to list ten institutions that are willing to do that, two thirds of them would be military institutions and the remaining third would most likely be affiliated with a church.”

Smith was bold in his remarks, in his periodic guest speaker presentations to the CGSC classes, and in his life. He was not only a noted entrepreneur, he was also an acclaimed author and a donor to numerous philanthropic causes.

“Hyrum Smith was the perfect man to serve as our Foundation’s president in our early years,” said Foundation President/CEO Rod Cox. “He was not only a tremendously successful businessman who provided us with his resources and his talents, he was a veteran who loved our country and understood the value our Foundation added to the Army’s Command and General Staff College. His professional acumen, patriotism, and personal kindness were the perfect combination. All those who have benefitted from the CGSC Foundation’s programs and services, owe Hyrum a tip of their hat. I am proud to follow in his footsteps and to continue his legacy.”

“Hyrum was referred to me by a friend,” said former Foundation CEO Bob Ulin. “I reached out to him and asked him to visit with me at Fort Leavenworth. Hyrum joined the Foundation on his first visit after meeting with then Lt. Gen. Dave Petraeus, our commandant. Hyrum was enthusiastic about our mission. It became apparent that he was the leader we needed to help us launch a national campaign, so we elected him our president and for the next six years he was our cheerleader-in-chief, primary champion, and chief development officer. He was a great friend of the Army, the Command and General Staff College and the young officers with whom he interacted. We shall miss him.”

Smith and his wife Gail live in Gunlock, Utah where they have rejoiced in their time with their six children and 24 grandchildren. The Foundation trustees and staff extend their most profound condolences to the family as they mourn the loss of a great man. Hyrum Smith delivers motivational remarks to members of the CGSC Foundation board of trustees at a special meeting conducted Feb. 13, 2008, in the Arnold Conference Room of the Lewis and Clark Center on Fort Leavenworth. (photo by Mark H. Wiggins) Hyrum Smith, right, gets down to business at the CGSC Foundation board meeting at Fort Leavenworth Feb. 26, 2009, with the ever-present Diet Coke in the midst of mostly coffee drinkers. (photo by Mark H. Wiggins) Hyrum Smith participates in a “fun shoot” at the Fort Leavenworth range hosted by the Foundation leadership prior to a board meeting on March 23, 2011. (photo by Mark H. Wiggins) Hyrum Smith takes a photo with members of his team during the CGSC Foundation golf tournament on Sept. 6, 2011. Foundation trustee and Medal of Honor recipient Col. (Ret.) Roger Donlon is second from right. (photo by Mark H. Wiggins) Hyrum Smith presents his “3 Gaps” lecture to CGSC students Jan. 26, 2016, in Eisenhower Hall of the Lewis and Clark Center on Fort Leavenworth. This would be Smith’s last presentation at CGSC. (photo by Mark H. Wiggins)