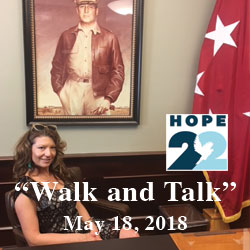 On May 18 the CGSC Foundation invited Brooke Brown, development director of the Nelson-Atkins Museum of Art, for a tour. Brown is also the Founder of the “Hope 22 Photography Project.” Brooke Brown, development director of the Nelson-Atkins Museum of Art and founder of the Hope 22 Photography Project visits the MacArthur Room in the Lewis and Clark Center during her visit on May 18.

Hope 22 is a local Kansas City photography project that brings awareness to the premise that 22 veterans commit suicide each day. The specific number has been brought into question and revealed to be somewhat smaller, nonetheless, Hope 22’s mission is to raise awareness around our country’s suicide epidemic and they seek to educate the public on mental health issues such as PTSD, as well as to offer local resources for those in need. Brown is hoping to find more display options for this project, which might include Fort Leavenworth’s Ike Skelton Combined Arms Research Library or another venue in Leavenworth.

After a whirlwind visit of the post with Foundation CEO Doug Tystad, Brown visited the Lewis and Clark Center, home of the Command and General Staff College. In addition to sitting in MacArthur’s chair and getting a photo with the portrait of the famous general behind her, she toured the Hall of Fame display in the atrium, viewed a portion of the art and gift collection given by international officers and others, and also had the opportunity to view the stained glass windows that were donated to the College by previous graduating classes. Brown also got to step inside a classroom and learn more about class dynamics and the curriculum.

The last stop for Brown was a tour of the third floor which includes paintings donated by each graduating class, as well as the International Hall of Fame display where she learned about the importance of the program in building international relationships that benefit foreign policy and national security.

Currently, the Hope 22 exhibition is on display at a gallery in the crossroads in Kansas City until the end of June. It then goes on to be displayed at the national VFW conference in Kansas City from July 21-25.

Contact Joan Cabell, the CGSC Foundation director of development, to schedule your own group’s “Walk and Talk” tour of CGSC and Fort Leavenworth and learn about the education of leaders for the nation. – joan@cgscf.org.