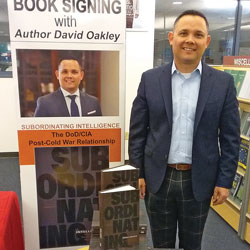 On April 17, the CGSC Foundation co-sponsored with AAFES a book signing at the Lewis and Clark Center bookstore with Lt. Col. David Oakley, an assistant professor at the National Defense University and author of Subordinating Intelligence: The CIA/DoD Post-Cold War Relationship. Lt. Col. David Oakley, an assistant professor at the National Defense University and author of “Subordinating Intelligence: The CIA/DoD Post-Cold War Relationship,” signs his book for a CGSC student in the AAFES Bookstore in the Lewis and Clark Center on April 17. Lt. Col. David Oakley, an assistant professor at the National Defense University and author of “Subordinating Intelligence: The CIA/DoD Post-Cold War Relationship,” takes time for a photo in the AAFES Bookstore in the Lewis and Clark Center on April 17.

Oakley is a graduate of the 2012 class of the Command and General Staff Officers Course and 2013 graduate of the School for Advanced Military Studies. He won the Simons Center Interagency Writing Award for his graduating class of SAMS. His article entitled “Adapting to Change: Strategic Turning Points and the CIA/DoD Relationship” was published in the InterAgency Journal, issue 5-1, in 2014.

During his visit to the area, Oakley not only conducted the book signing event, but also spoke at an event at the University of Kansas and assisted in some elective classes at CGSC.

Oakley is currently serving as an assistant professor at National Defense University’s College of International Security Affairs (CISA) in Washington, D.C. He was originally commissioned as a field artillery officer at Pittsburg State University in 1998. After assignments as an artilleryman in Korea and Fort Sill through a company command, he left active duty for the Army Reserve in 2005.

While off active duty Oakley was selected for and completed the Central Intelligence Agency’s Clandestine Service Trainee Program as a staff operations officer. After graduating he served within the CIA’s Near East Division. Following his CIA service, Oakley served as a contractor with the National Counterterrorism Center’s Directorate of Strategic Operational Planning.

After his service with the CIA and NCC, Oakley returned to the active Army in late 2007 as a Functional Area 57 (Strategist) officer and completed the “Basic Strategic Arts Program.” He subsequently served as a planner with the 1st Infantry Division at Fort Riley. In 2010, he deployed with the division to Iraq where he served as a liaison officer to the U.S. Embassy in Baghdad. In 2011, he moved to Fort Leavenworth to attend CGSC.

After graduating from CGSC and SAMS in 2013, he was assigned as a planner with the 5th Army/Army North until 2015, after which he assumed his current role at the NDU.

In addition to his undergraduate degree in political science, Oakley has earned two Masters of Military Arts and Sciences degrees (one each from CGSC and SAMS), a Master of Public Administration from the University of Oklahoma, and a doctorate in security studies from Kansas State University.

The Foundation was pleased to coordinate Oakley’s book signing event at the bookstore in the Lewis and Clark Center as part of its mission to enhance the academic experience at CGSC.