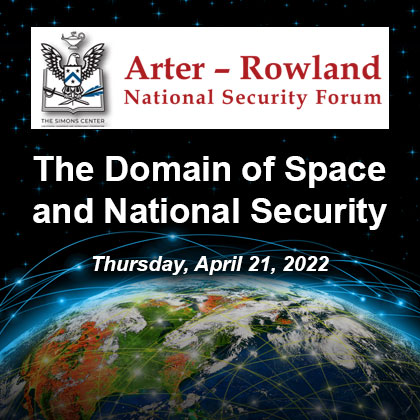 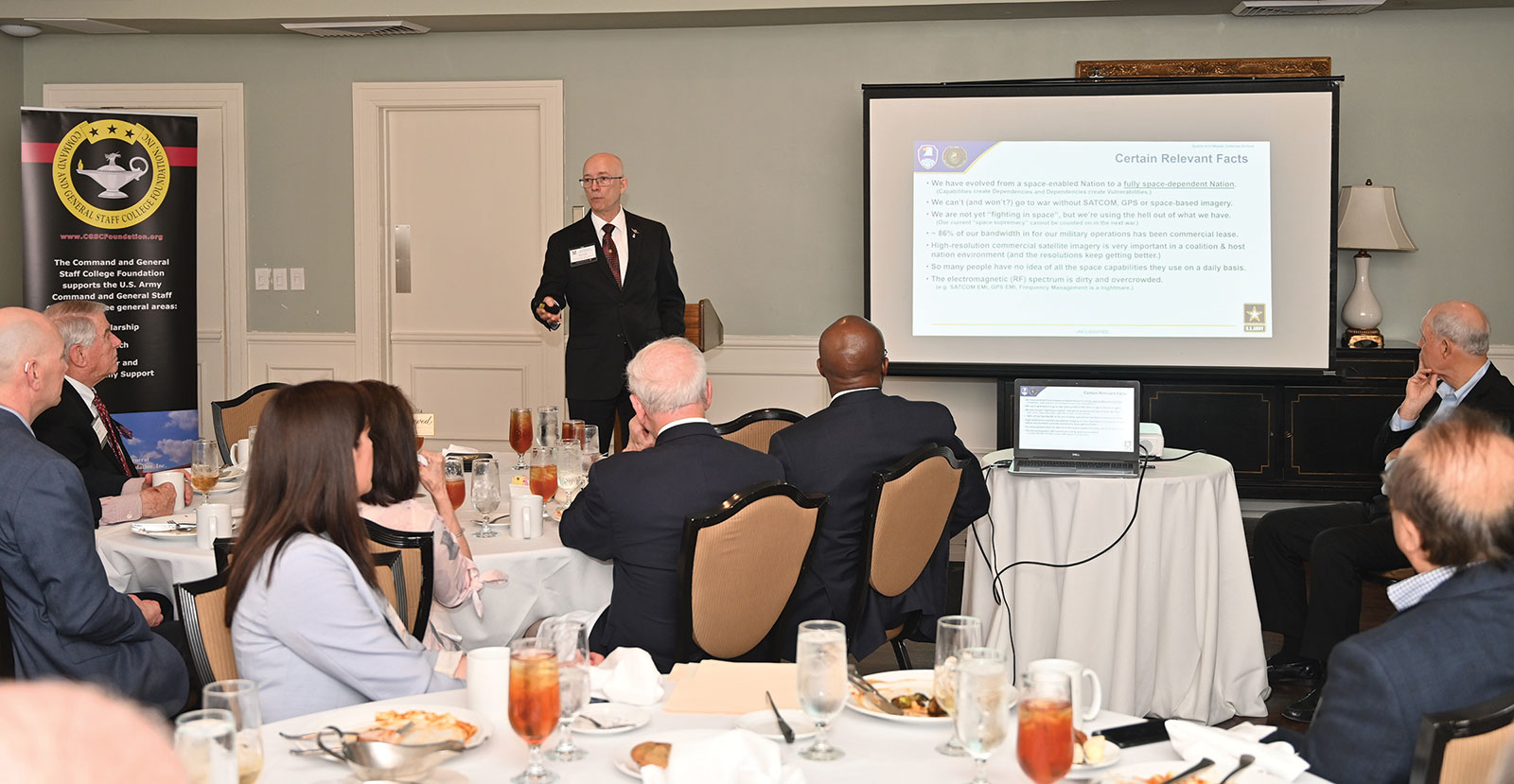 Simons Center Director Bob Ulin welcomed the ARNSF members, some of whom also introduced their guests, and then introduced the guest speaker, Thomas A. Gray. 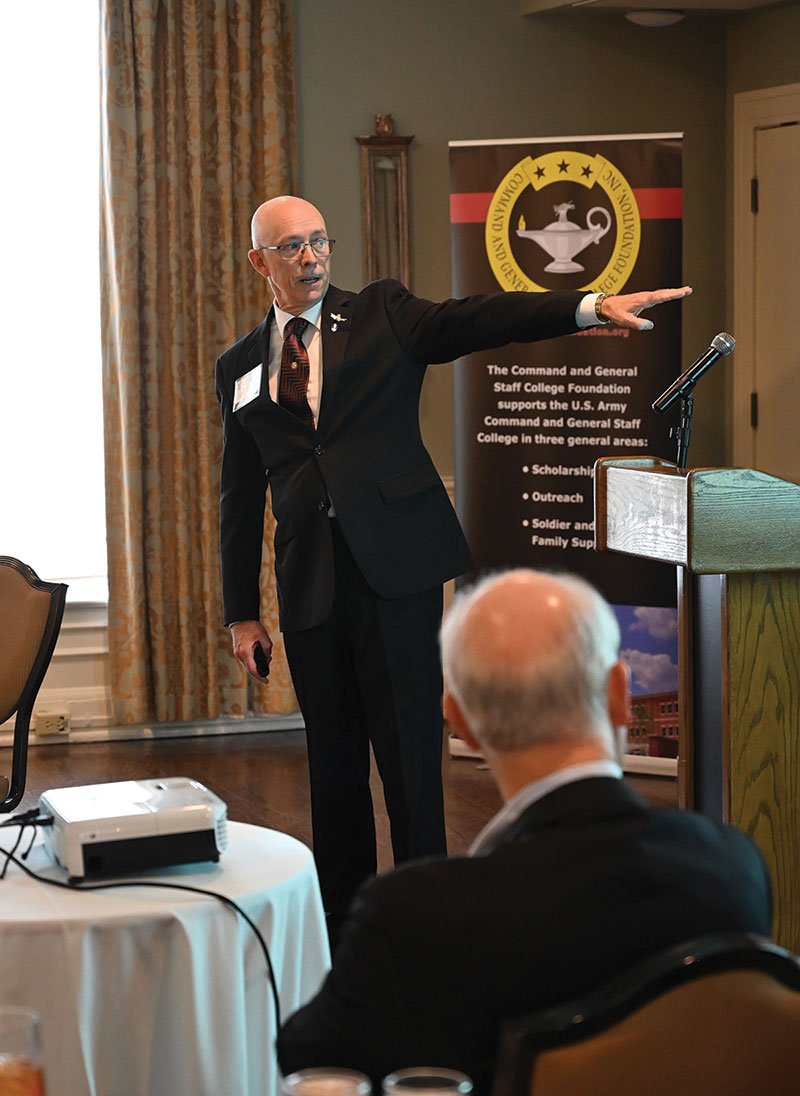 Top photo and above – Thomas A. Gray, the U.S. Army Space and Missile Defense Command’s liaison officer to the U.S. Army Combined Arms Center and Army University at Fort Leavenworth, delivers his presentation on the Domain of Space and National Security for the Arter-Rowland National Security Forum luncheon event on April 21, 2022, at the Carriage Club in Kansas City.

Gray serves as the U.S. Army Space and Missile Defense Command’s liaison officer to the U.S. Army Combined Arms Center and Army University at Fort Leavenworth with responsibility for the integration of space knowledge and education across various TRADOC, Joint, and other service schools to include the U.S. Army Command and General Staff College.

Gray’s presentation focused on National Security Space and the associated capabilities, limitations, and vulnerabilities relevant to national security and great power engagement. He framed his presentation by saying that “from news media to cell phones to ATMs and more, the United States and the world rely on space capabilities for the basics in today’s daily life. Citizens have no concept of the ubiquitous nature of how the domain of space influences and enables our daily lives.”

Gray discussed the implications of space and how the capabilities impact our nation, industrial base, and military operations. He kicked off his presentation with a video that demonstrated how space capabilities enabled U.S. military forces in a deployed environment and how those same forces would be handicapped if those same capabilities were rendered inoperative by enemy actions. As he progressed through the remainder of his presentation he addressed the specific systems in our nation that depended on space capabilities in addition to military communications and targeting, such as television, internet, cell phones, the global finance markets, transportation, power management, as well as volcanoes and other natural disasters.

Gray also addressed satellite and how satellites orbit the earth and what new technologies are being considered and in some cases deployed to provide better and more redundant coverage. This topic let into a discussion of strategic space considerations wherein our nation must collaborate with other nations as well as be watchful of our adversaries to preclude them from denying our access to our space systems. He mentioned that the commercial sector is very capable and could well be integrated into consideration for national security uses.

After he concluded his formal presentation, Gray conducted a very lively question and answer period with Forum attendees.

Ulin presented Gray with a Foundation commemorative coin and closed out the luncheon with a short brief about the next Forum scheduled for May 26 which will feature a presentation from Dr. Mahir Ibrahimov, the director of the Cultural and Area Studies Office at the U.S. Army Command and General Staff College.

A retired U.S. Army officer, Gray was one of the first officers selected to be designated as a space operations officer. He served in Army Space Command, the Space and Missile Defense Lab, and the Space and Missile Defense Command’s Directorate of Combat Development. He is qualified as a Level 3 Space Professional of the U.S. Army Civilian Space Cadre, holds the space operations officer designation 3Y, and has earned the U.S. Army Master Space Badge. Gray holds a bachelor’s from New Hampshire College and earned a master’s from Central Michigan University.

ARNSF events are only open to ARNSF members and their guests. If you are not a member but are interested in joining, contact John Nelson at John.nelson@cgscf.org or visit the Forum page on the Simons Center website for more information.