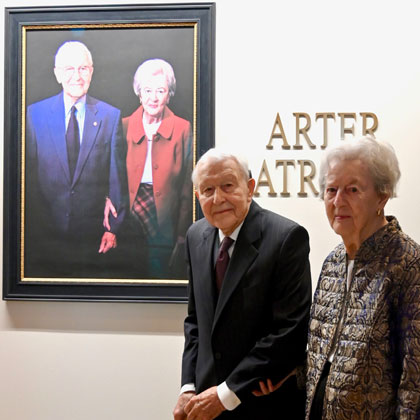 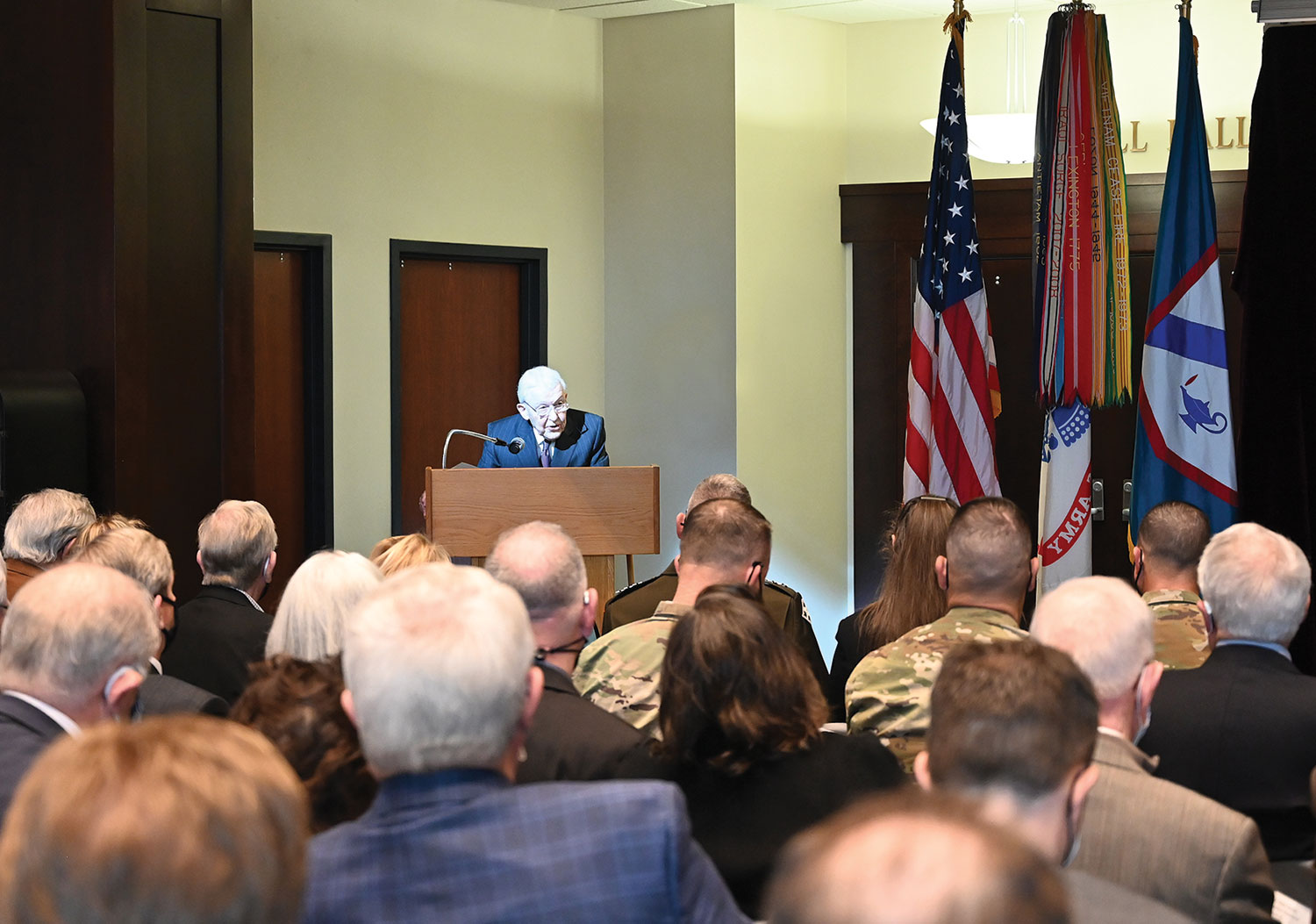 The Combined Arms Center and Army University dedicated the atrium area of the Lewis and Clark Center, home of the U.S. Army Command and General Staff College, in the name of Lt. Gen. Robert and Lois Arter in a ceremony on Nov. 17, 2021.

Center-Above – Lt. Gen. (Ret.) Robert Arter delivers remarks during the dedication ceremony for the Lewis and Clark Center atrium on Nov. 17, 2021. The atrium was dedicated as “The Arter Atrium” in honor of Arter and his wife Lois, for their contributions to the nation, the Army, Fort Leavenworth and the community. Above – Lt. Gen. Theodore Martin, commanding general of Fort Leavenworth and the Combined Arms Center and commandant of the U.S. Army Command and General Staff College, congratulates the Arter’s after unveiling their portrait display

Dozens of family, friends, and admirers of the Arter’s attended the ceremony during which Lt. Gen. Arter spent several minutes naming as many as he could to thank them for their support over the years.

“The Arter family represents all that is good about our country and our Army,” Lt. Gen. Martin said. “They serve as a great example for all of us of what an Army family can be and should be. That my friends is why we are here today to dedicate this atrium in their honor. It is a privilege to be present today and assist in this tribute to a great citizen-Soldier along with an extraordinary spouse who have made Fort Leavenworth and the surrounding community such a great place to raise a family.”

After Martin’s remarks, Arter delivered his own brand of remarks, thanking nearly as many people as were in attendance. Once Arter concluded, Lt. Gen. Martin unveiled the portrait display and the Arters conducted a receiving line shaking hands with well-wishers. 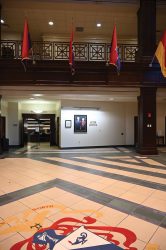 The Arter Atrium display is located just inside the entrance of the Lewis and Clark Center. The atrium was dedicated in the name of Lt. Gen. (Ret.) Robert and Lois Arter in a ceremony Nov. 17, 2021.

Lt. Gen. (Ret.) Robert Arter was the CGSC deputy commandant from 1977-1979, and after retirement, he went on to a second career in the banking industry with Armed Forces Bank in Leavenworth while also serving in numerous military and philanthropic organizations. In December 2005, he became the founding chairman of the CGSC Foundation and in November 2006 he was appointed as the Civilian Aide to the Secretary of the Army for Kansas (East region). He served 13 years as a CASA, retiring from the position in March 2018 and was selected as a CASA Emeritus. He served nine years as the CGSC Foundation chairman and was elected as Chairman Emeritus after retiring in September 2014.

As a CASA Emeritus and CGSC Chair Emeritus, Arter, 92, still serves the Army he joined in 1950. To this day he and Lois, his wife of 71 years, still attend CGSC and CGSC Foundation events whenever possible. 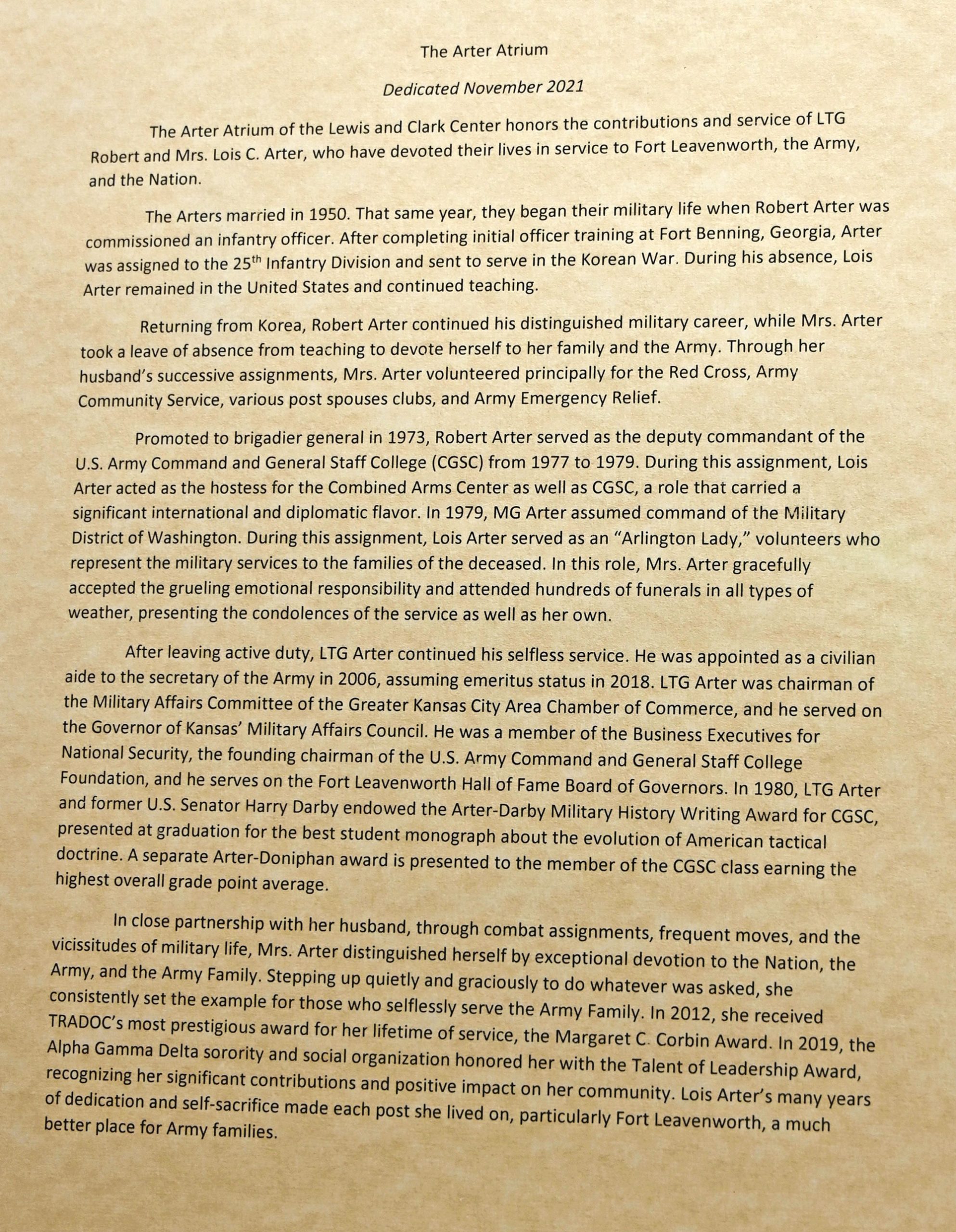 A close-up of the narrative that accompany’s the Arter’s portrait display in the newly dedicated Arter Atrium of the Lewis and Clark Center.