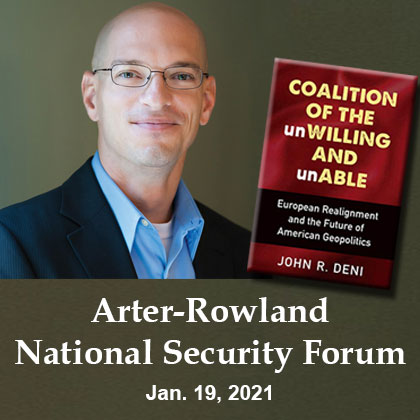 The second presentation of the Arter-Rowland National Security Forum was conducted Jan. 19, 2021 in an online conference platform.

Dr. John R. Deni, Research Professor of Security Studies at the U.S. Army War College and an adjunct professorial lecturer at American University, conducted a presentation on the North Atlantic Treaty Organization (NATO) entitled “Coalition of the unWilling and unAble? – European Realignment and the Future of American Geopolitics.”

Deni’s presentation was based on his recently published book of the same title.

“There are a host of demographic, economic, political and military changes that have recently played out amongst our major allies or that are currently playing out right now,” Deni said. “Those changes are going to force the U.S. to re-examine the allies we rely upon in Europe.”

Deni went on to cover why Europe matters to the U.S. – trade, shared values, a burden-sharing partner in global stability – to name a few, and why the U.S. should help prevent the rise of a single, malevolent power in Europe. He also explained American geopolitics through the lens of our National Security Strategy and other strategic documents and how those documents, apart from political affiliations or parties, lay out the need for allies by our side in Europe.

Deni discussed in some detail the strategic-level changes going on with five of the U.S.’s larger allies – the United Kingdom, France, Germany, Italy and Poland. He said there are certainly other allies, but these five have worked with the U.S. on a scale much greater than some of the others. He walked through some of the details with each country, such as “Brexit” in the UK. Brexit could likely mean a smaller UK economy and a resultant smaller defense investment, which in turn could affect their strategic reach as a U.S. ally. Similarly, the French economy and their military are stretched as is Italy’s.

“Meanwhile, as our allies have been going through massive changes, we in Washington have been generally slow to realize that there is a great power competition underway,” Deni said. “Our adversaries in Russia and China have not been sitting on the sidelines.”

Deni argues that because of all this change, the U.S. needs allies now more than any time since the 1940s. He stated the U.S. certainly does not hold all the cards, but there are policy tools the U.S. can pursue to mitigate the downside of some of the trends. In his book he offers 13 policy options as part of the U.S. approach, but in his presentation he stressed three of them: expanding transatlantic free trade, improving public diplomacy, and negotiating a new transatlantic burden-sharing bargain.

At the conclusion of his presentation, Deni offered a question and answer period moderated by Scott Weaver, president of the Kansas City Chapter of AUSA, and CGSC Foundation CEO Rod Cox. 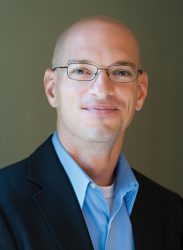 Before teaching at the U.S. Army War College, Dr. John R. Deni spent a decade in Europe as a political advisor to senior U.S. military commanders. He also spent seven years in Washington as a supervising consultant for clients in the U.S. Departments of Defense, Energy, and State. He holds a bachelor’s in international relations from William & Mary, a master’s in U.S. foreign policy from the American University, and a doctorate in international affairs from George Washington University. He is the author or editor of several books, peer-reviewed monographs and journal articles, book chapters, essays, and op-eds, all of which can be found at www.johnrdeni.com.