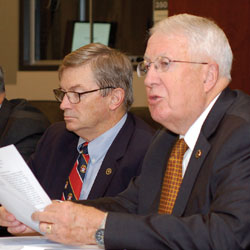 The CGSC Foundation Board of Trustees met on Sept. 21-22 at Fort Leavenworth. Our board normally meets twice a year, once in March and then again at our annual meeting in September. We had 21 trustees in attendance to consider important aspects of running the Foundation. I’d like to use this column to report on the important and rather momentous decisions coming out of that meeting that will affect the Foundation for years to come. 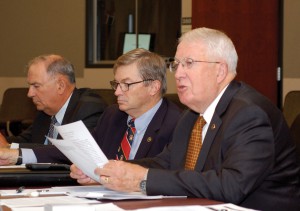 Foundation Chairman Lt. Gen. (Ret.) John Miller, right, delivers his report at the September 2016 board of trustees meeting. Board President Mike Hockley, center in the background, and Treasurer Tom Dials take notes. – Click the photo for more photos from the meeting.

One of the important duties of the board is to ensure continuity and to elect new trustees, re-elect trustees for additional terms of service, farewell outgoing trustees, and to bestow the honor of emeritus status to those trustees that have served with distinction in support of the Foundation. Our trustees are charged with overseeing and approving the operations of the Foundation as well as ensuring financial viability. In addition to elections for trustee, we also conducted elections for three of our officers. President Mike Hockley, Senior Partner at Spencer Fane, LLP, was re-elected for a second term; Treasurer Tom Dials, former CEO of Armed Forces Insurance, was re-elected for a second term; and Trustee Douglass Adair, Vice President of Exchange National Bank, was elected for a first term to serve as Secretary. Congratulations to all of our new officers and thanks for your service.

The board elected two of our founding trustees, Brig. Gen. (Ret.) Bill West and Mr. Mark “Ranger” Jones, for the title Emeritus Trustee in recognition of their outstanding support to the Foundation. West served as two-term Treasurer, member of the Investment Committee and the Finance and Audit Committee, and an active member of the board. He will remain active on several committees and serve as an advisor to the treasurer. Ranger Jones has served as the Vice President for Development and is credited with helping the Foundation secure the funding from the Perot Foundation for the Simons Center for Interagency Cooperation and the Shelton Visiting Professor of Ethic,s as well as the endowment from Tri-West Healthcare Alliance for the General Colin L. Powell Lecture Series. Jones will continue to make introductions of influential business leaders for the Foundation. The staff chose both West and Jones to be our “Persons of the Month” for November in recognition of their election as Emeritus, check out the column beginning on Nov. 1.

The board re-elected the following trustees for the terms indicated: President Mike Hockley (2nd term); Mr. Douglass Adair (3rd term); Brig. Gen. (Ret.) Stan Cherrie (3rd term); Col. (Ret.) Art Hurtado (2nd term); and Lt. Gen. (Ret.) John Pickler (2nd term). The Board also said farewell to the following Trustees at the conclusion of their terms of service: Secretary Gabrielle Reilly; Lt. Gen. (Ret.) John Otjen; Mr. Steve Panknin; and Mr. Rolf Snyder. I would like to say thanks to all of our trustees, but a special word of thanks to our departing ones. You have served the Foundation well. We wouldn’t be where we are without your help and we hope you stay engaged with us. Thank you again for your service.

The board was pleased to elect three new members to continue the good work of our departing trustees:

I am pleased to welcome these new members and I look forward to working with them.

These changes to the board bring our total number of active trustees to 27. Additionally, we now have a total of five Emeritus Trustees including Chairman Emeritus Lt. Gen. (Ret.) Bob Arter; Gen. (Ret.) Bill Richardson; and Col. (Ret.) Willard Snyder, as well as our two new Emeritus honorees. You can check out all of our trustees in the About Us section of our website.

Other important decisions were also made during the meeting. Our Governance Committee continued to implement our strategic plan for the board with two initiatives. The first initiative was to realign our committee structure to put us in line with nonprofit governance best practices. The short version is that the Finance and Audit committee was structured as a stand-alone Audit committee with the Investment Committee taking up finance tasks; the nominating function was eliminated from the Executive Committee charter and assumed by the Governance committee; and the Bylaws Review Committee was eliminated with the function being taken up by the Governance committee. These changes streamlined the committee structure leaving the Foundation with the following regular standing committees: Executive; Finance and Investment; Human Resources (Personnel); Audit; and Governance; along with the Programs, Development, and Simons Center committees. As part of this initiative, membership of the Executive Committee was expanded to include the individual committee chairs.

The second initiative recommended by the Governance Committee that the board approved was a new schedule for board meetings. The board felt that two meetings a year was insufficient to meet the needs of governance and financial oversight. Therefore, the members approved retaining the annual meeting for one and a half days in September and adding quarterly two-hour meetings for the remainder of the year. The quarterly meetings will include call-in for non-local trustees and would take place on the first Tuesday of the second month of the quarter. The first of these quarterly meetings is set for Nov. 1 from 3-5 p.m., with local members gathering at the offices of Spencer Fane in Kansas City.

The Development Committee reported on two major campaigns that the Foundation will undertake. The first campaign, the Distinguished Leader Development Chair program, was approved at the March board meeting. This campaign has a goal of $1 million to fund a leader development chair in support of CGSC, the Center for Army Leadership, Army University and the Combined Arms Center (CAC). This chair will feature a military, business or civic leader with a distinguished career of leading large organizations, implementing organizational change on a large scale, and developing leaders at all levels who will support CGSC electives and speaker programs. The chair will also participate in Army Leader Exchange forums, mentor and coach, and provide input on leader development topics to CGSC, Army University, and CAC leadership as requested. Trustee Jim Mackay is the Foundation champion for promoting donors to support this program.

The second campaign is described as the CGSC Art and Gift Collection Support Initiative. This program has the goal to raise $3 million dollars to catalogue, promote, display/curate, preserve, and protect the over 3,800 items in the collection at CGSC. The collection is in need of support and is a hidden treasure here at Fort Leavenworth. This program will seek contributions to cover the five areas above as well as provide needed funding for Foundation operations. Trustee Wes Westmoreland and the Todd Weiner Gallery of Kansas City are the champions for this multi-year project. The members approved this initiative contingent on further details being developed and presented to the next meeting for final approval. The staff has conducted meetings with the government representatives to iron out the legal and acceptance issues for this long-term project in addition to building the start-up budget, goals and procedures for the campaign. These will be approved at the next board meeting and if all goes according to plan, the campaign will kick off prior to the holidays. We hope to begin work with the government on the art collection early next year.

The trustees all felt that this annual meeting was one of the most productive in recent Foundation experience. I was pleased with the energy and enthusiasm of the board members and our staff as we worked together to chart a dynamic and vibrant future in support of our mission. I hope those of you reading this will get involved with us. – We can use your help and energy.