Board Members get opportunity to shoot antique weapons 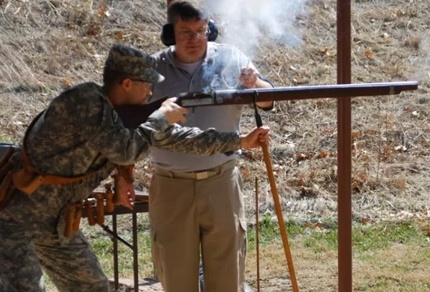 On March 14, many of the Foundation board members spent the afternoon at Fort Leavenworth’s Kinder Range for an “Antique Weapons Shoot” hosted by the CGSC Department of Military History, Fort Leavenworth Frontier Army Museum and the CGSC Foundation.

Historians were on site to explain the background and use of each weapon ranging from 1580 to the present.  Weapons available for shooting were the Flint Lock Musket, Match Lock Musket, 1861 Percussion Cap Springfield, Bolt Action Rifle, First Generation Breach Loader and a Semi-Automatic Rifle.

The shoot was followed by a reception at the Frontier Conference Center where the range targets were on display.

Maj. Michael Kay captured a video of some of the shooting.  See his video below.