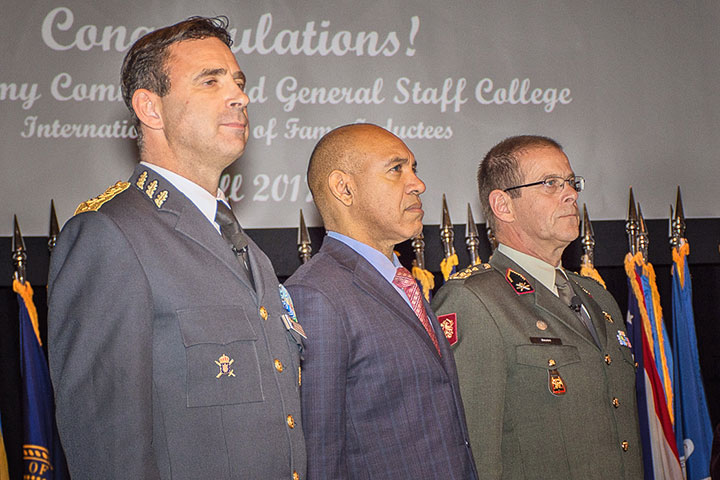 The Command and General Staff College inducted three international military leaders, into its International Hall of Fame on Oct. 12, 2017 at the Lewis and Clark Center. The induction brings to 274 the number of leaders who have been honored in the Hall of Fame from the more than 8,000 international officers who have graduated from the college. Officers honored include (left to right in the photo above) Lt. Gen. Dennis Gyllensporre, Chief of Defense Staff, Swedish Armed Forces; Major Gen. Antony Anderson, Chief of Defense Staff, Jamaica Defense Force; and Lt. Gen. Leo Beulen, Commander of the Royal Netherlands Army.

Beulen became Commander of the Royal Netherlands Army and was promoted to his present rank in March 2016. Prior to his current position, the 1998 CGSC graduate commanded 25 Section Armored Anti-aircraft Artillery as a lieutenant colonel and later the Air Defense Artillery Command as a colonel. He was deployed to Bosnia Herzegovina in the former Yugoslavia in 2002 and to the International Security Assistance Force headquarters in Kabul, Afghanistan in 2012. As a general officer, he has served with the NATO Forces headquarters in Heidelberg, Germany, as Director of Operation for the Defense Staff, and as deputy commander of the 1st (Germany/Netherlands) Corps in Munster, Germany. 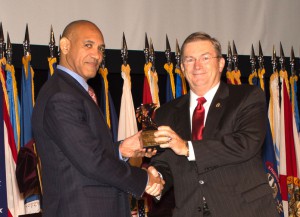 Beulen started his military career in 1978 at the Royal Military Academy in Breda. In 1982, he was sworn in as a Second Lieutenant with the Defense Artillery and posted as Platoon Commander and had several command and staff functions up to 1991. From 1991 to 1993, he attended the Staff Service Course and Advanced Military Studies at the Netherlands Defense College. As a major he was head, operations office, G3 Section with the 1st (Netherlands) Corps and worked as the Chief Assistant to the Deputy Chief of the Defense Staff prior to attending CGSC.

A 2000 graduate of CGSC, Anderson was appointed Chief of Defense Staff of the Jamaica Defense Force (JDF) on 10 October 2010. Prior to this appointment, Anderson served as Deputy Chief of Defense Staff with responsibility for force strategy, future plans and development; coordination of the National Security Strategy and the implementation of the JDF’s Strategic Defense Review.

Anderson enlisted in the JDF in 1984 and after completing his initial officer training at the Royal Military Academy Sandhurst, United Kingdom, he was commissioned and posted to the 2nd Battalion, the Jamaica Regiment. He has held a number of command appointments throughout his career, including Commanding Officer for the JDF Air Wing and 1st Engineer Regiment. In 2006, he deployed to Trinidad and Tobago to head the Caribbean Community Operations Planning and Coordinating Staff that was formed to develop the regional security plans for the Caribbean countries participating in the ICC Cricket World Cup 2007.
Anderson holds a bachelor’s degree in Mechanical Engineering and a Master’s degree in Defense Administration from Cranfield University, United Kingdom. He is a graduate of the Canadian Land Forces Command and Staff College and U.S. Army CGSC.

Gyllensporre was a member of the 2001 graduating class earning a Master of Military Arts and Science degree and the Dwight D. Eisenhower Award as the top international graduate. Since late 2014, he has been the Chief of Defense Staff with the rank of lieutenant general. He is also director of the Special Forces and the Commandant of Stockholm with designated state ceremonial responsibilities.

He was commissioned as a lieutenant in 1988 at Norrbotten Signal Regiment. He was deployed to Tuzla, Bosnia and Herzegovina in 1997. Subsequently, he became the battalion commander at the 19th Infantry Regiment. In 2003, he was deployed to Sudan, where he served as Chief Operations Officer in the Joint Military Mission. He returned to his post at the Ministry of Defense in 2004 and was promoted to colonel. Following an assignment as the Chief of Staff at the Swedish Joint Forces Command he was dispatched to Brussels, Belgium in 2005 and worked as Chief of the Doctrine and Concepts Branch, at the European Union Military Staff. He then deployed to Mazar-e-Sharif, Afghanistan in 2008 to serve as Chief of Staff of the Regional Command North Headquarters. He returned to Stockholm, to serve in senior positions in the Armed Forces Headquarters. In 2012 he was appointed Director of the J5 (Policy & Plans) Department and promoted to major general.

International military student participation in cooperative military studies in the United States originated at Fort Leavenworth with the arrival of Swiss Lieutenant Henri Le Comte in 1894. Since then, international students, representing 165 countries to date, have become an integral part of the Fort Leavenworth experience. These talented military officers contribute to a rich professional and cultural exchange environment.

For more photos from the ceremony view the CGSC Flickr album.