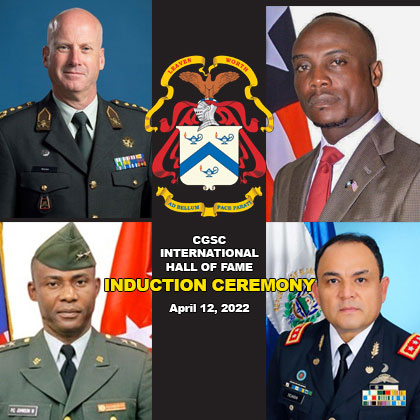 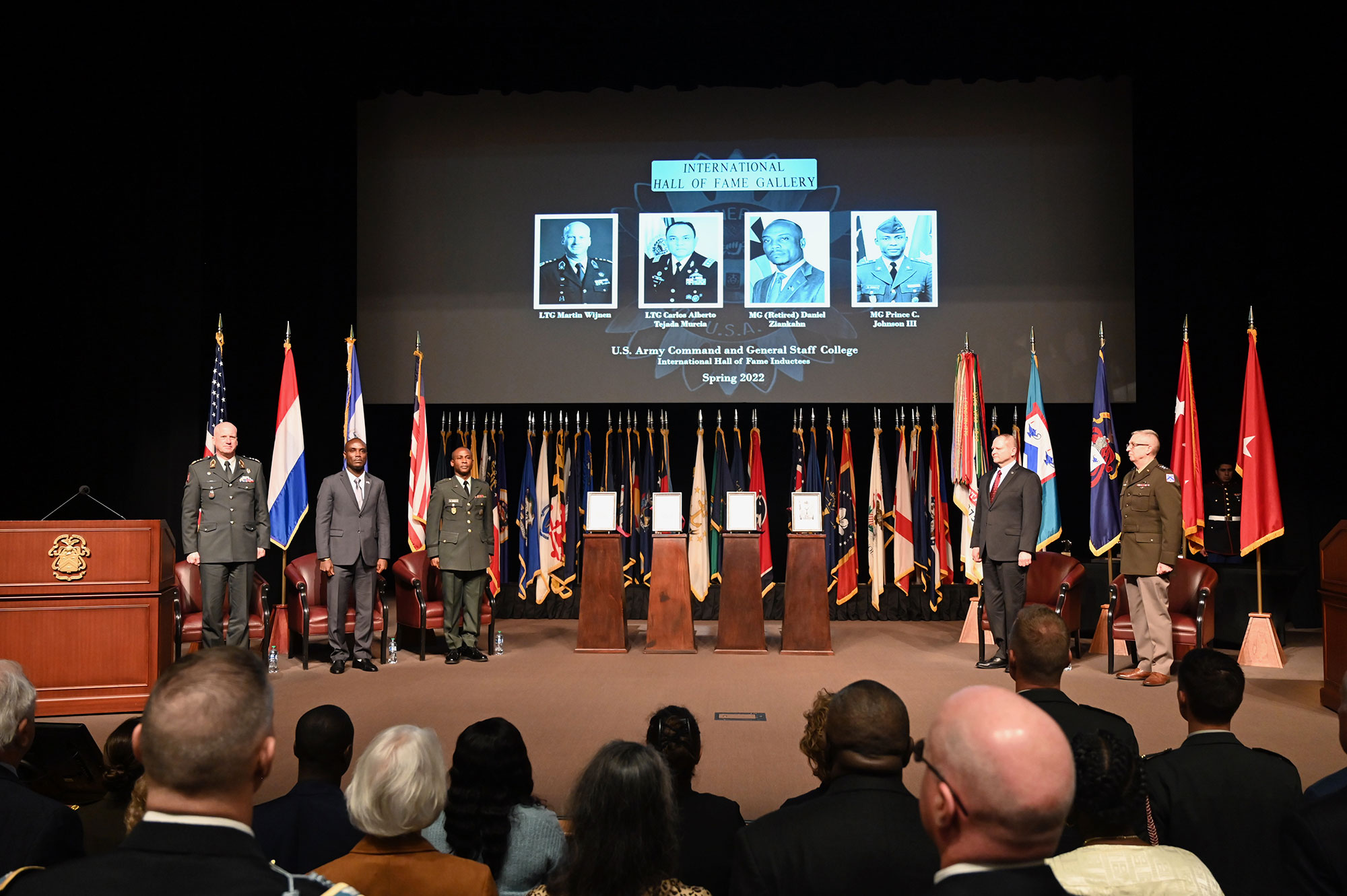 On Apr. 12, 2022, the U.S. Army Command and General Staff College inducted four new members into its International Hall of Fame at the Lewis and Clark Center, Fort Leavenworth, Kansas. The ceremony was hosted by CGSC Commandant Lt. Gen. Theodore D. Martin and led by Director of the International Military Student Division Jim Fain.

After unveiling their portraits for the Hall of Fame, Martin presented the inductees with a certificate of honor from the Military Order of the World Wars. Brig. Gen. (Ret.) Bryan W. Wampler, CGSC Foundation chairman, presented each inductee with an eagle statuette signifying their appointment as life constituents of the CGSC Foundation.

International military student participation in cooperative military studies in the United States originated at Fort Leavenworth with the arrival of Swiss Lieutenant Henri Le Comte in 1894. Since then, international students have become an integral part of the Fort Leavenworth experience. These talented military officers contribute to a rich professional and cultural exchange environment. 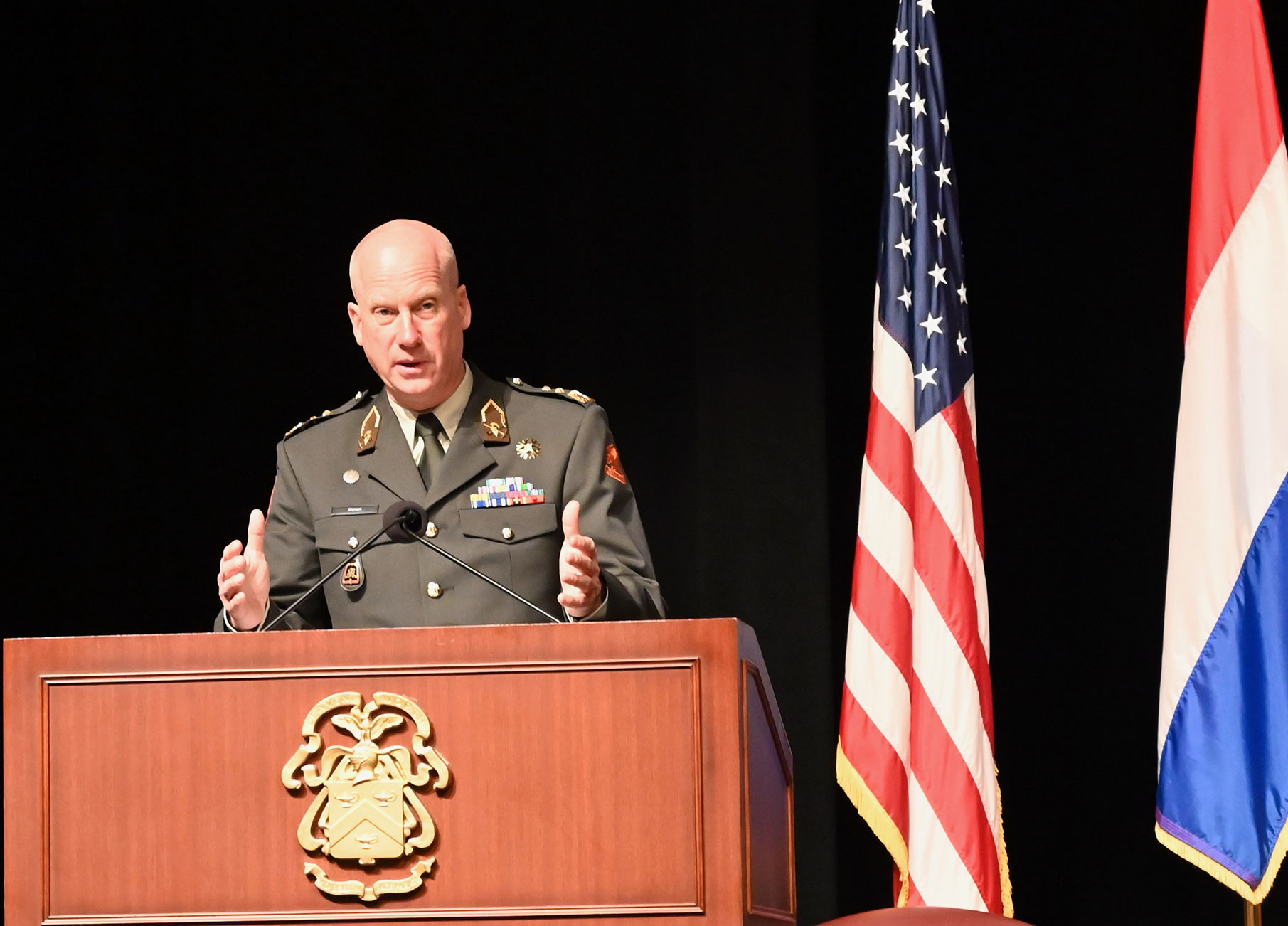 Lt. Gen. Martin Wijnen, Commander of the Royal Netherlands Army, delivers remarks after being inducted into the CGSC International Hall of Fame on April 12, 2022, at the Lewis and Clark Center, Fort Leavenworth, Kansas.

Lt. Gen. Martin Wijnen was born in Hattem, Netherlands, in 1966. He graduated as best man from the Royal Military Academy in 1989 and was posted as an armor officer in Germany. As a captain he led a United Nations Transitional Authority mine clearance and training team in Cambodia. Subsequently, he was assigned as deputy commander of the 102nd Construction Company and deployed to St-Maarten in 1995 and to Bosnia in 1996.

He attended the U.S. Army Command and General Staff Officers Course in Leavenworth, Kansas, obtaining the Master of Military Art and Science degree. After that he was promoted to lieutenant colonel and posted to the Defence College as Head of the Strategy Department.

“I’m truly grateful and humbled to stand before you,” Wijnen said during his acceptance remarks. “Grateful because when I look around this auditorium, I see close to 90 different nations that consider each other allies or friends and who together strive to increase peace and stability around the globe. And at the same time, I also feel an incredible sense of humility because of the realization of how much we owe our American friends for that peace and stability.”

After the attacks on Sept. 11, 2001, Wijnen was appointed as liaison officer to U.S. Central Command in Tampa, Florida, for Operation Enduring Freedom and the International Security Assistance Force in Afghanistan. In 2003, he took over command of 11th Armoured Engineer Battalion and then he was appointed as chief of the Policy Support Branch, Army Staff, as a colonel. In May 2009, he deployed to Afghanistan as chief of the Plans Branch for Headquarters, ISAF Regional Command South.

He then attended the Advanced Defence Course at the Netherlands Institute for International Relations, Clingendael. After that worked for two years as a program manager for the National Coordinator for Counterterrorism, Ministry of Justice.

Promoted to brigadier general in 2012, he became deputy director of plans within the Defence Staff. In 2014, he took command of 43rd Mechanized Brigade in Havelte and in 2016 he became the deputy commander of the Royal Netherlands Army as a major general. A year and a half later, he was promoted to lieutenant general and became the Vice Chief of Defence. In August 2019, Lt. Gen. Wijnen assumed command of the Royal Netherlands Army. 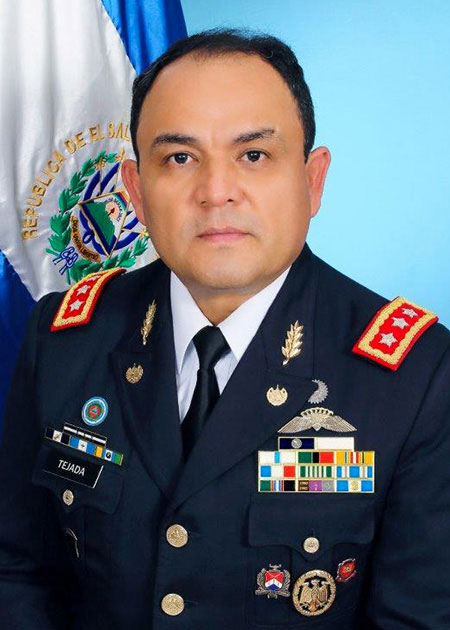 Lt. Gen. Tejada Murcia is the first IHOF inductee from El Salvador. He was honored during the ceremony in abstentia.

Tejada Murcia was born in San Salvador in 1964. He entered military service in December 1989 and was promoted to his current rank in December 2020.

In addition to the Command and General Staff Officers Course, he completed the Basic Engineers Officers course and the National War College in the United States. He has also completed professional military education courses in El Salvador, Germany, and Colombia.

In his remarks delivered by International Military Student Division Director Jim Fain, Tejada Murcia said he was thankful and humbled by the induction honor.

“The knowledge and experience I gathered in my [CGSC] classroom, the interaction with the faculty, U.S. and fellow international students prepared me to work effectively in a multinational environment halfway around the world,” Tejada Murcia said.

Ziankahn has a bachelor’s in business administration from the African Methodist Episcopal Zion University College, Liberia, and Master of Military Art and Science from the United States Army Command and General Staff College, Fort Leavenworth, Kansas. He is also a graduate of the Kennedy School of Government (Harvard University), where he acquired Executive Education in Senior Managers in Government and Senior Leaders in National and International Security.

Ziankahn was commissioned into the Armed Forces of Liberia in 2006. He successfully completed the following military training and courses: Initial Entry Training, Advanced Individual Training, Officer Candidate School and the Basic Non-Commissioned Officer Course in Liberia; The Basic Officer Leader Course, Infantry Basic Officer Course, and the Airborne Course at Fort Benning, Georgia; the Armor Company Commander Course in the Arab Republic of Egypt; and the Junior Staff Course at the Horton Academy, Freetown, Sierra Leone.

Ziankan said his induction is an honor and he is proud of his CGSC pedigree.

“For me, the cross-cultural experiences and sponsorship to the American way of academic and social life will always be treasured,” he said. “I’m filled with excitement and greatly overjoyed to be a member of the International Hall of Fame. It’s not just a personal honor but an honor for my family, the men and women of the Armed Forces of Liberia, and the people of Liberia.” 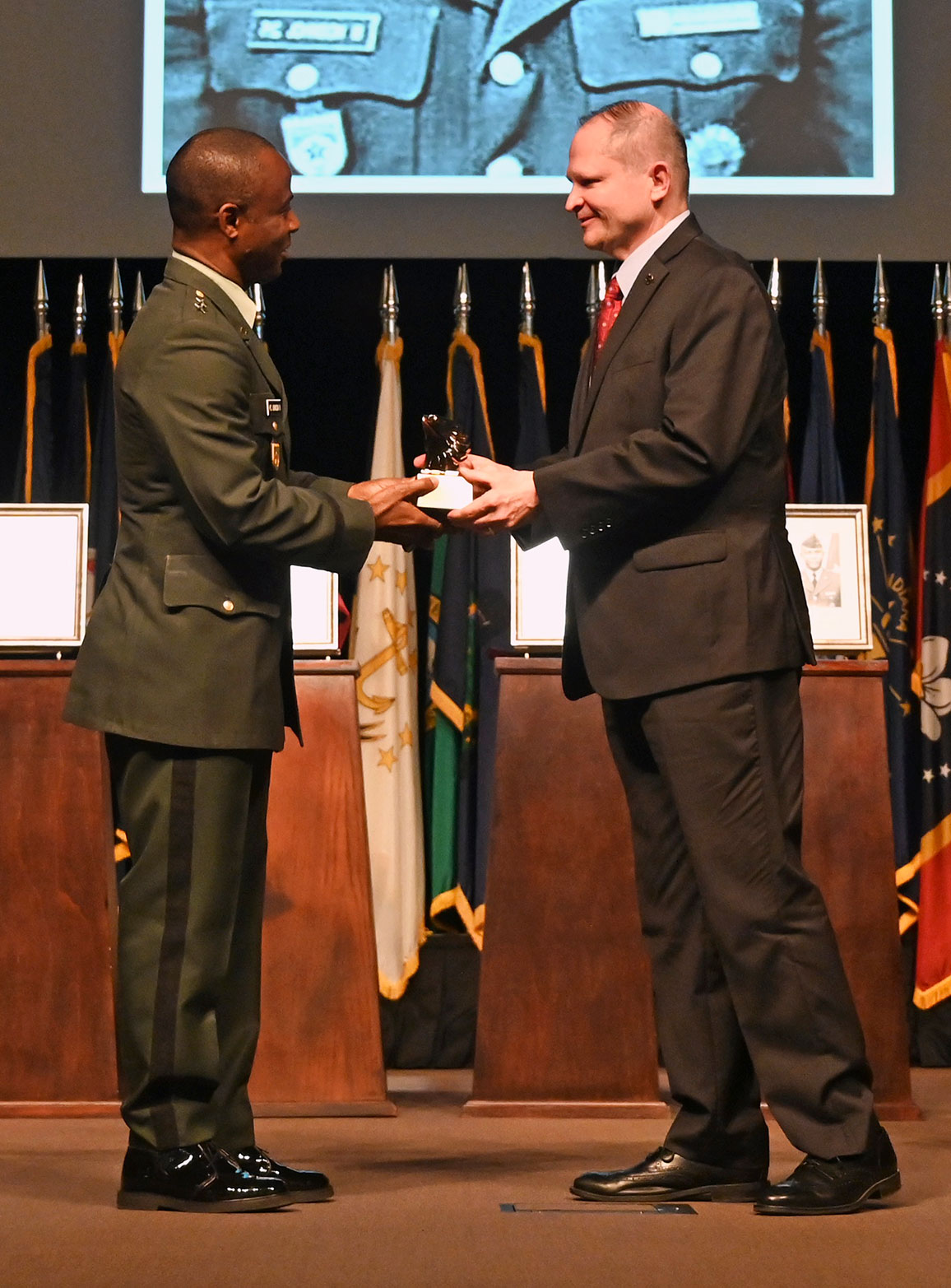 Maj. Gen. Prince C. Johnson, III is an infantry officer in the Armed Forces of Liberia who is currently serving as Chief of Staff. He was nominated by the president of the Republic of Liberia and confirmed by the Senate on February 5, 2018. He served as deputy chief of staff from December 1, 2016 to January 22, 2018.

He was commissioned after completion of Officer Candidate School in 2007. He has held several positions within the Armed Forces of Liberia: commanding general 23rd Brigade; commander, chief of operations, deputy assistant chief of operations, and chief of logistics in Headquarters, Armed Forces of Liberia; military assistant to the Minister of National Defense; assistant brigade operations officer; 2nd Battalion executive officer; company commander; and platoon commander.

In addition, he has completed the Harvard Kennedy School Executive Education for Senior Executives in National and International Security, Harvard University, August 2015, and both African Center for Strategic Studies Seminars in Senior Military Leadership and Managing Security Resources in Africa, June and November 2012.

During his acceptance remarks, Johnson said his current position challenges threats in the West African region, but leadership upholds the region. He said he recognized his growth between his time as a CGSC student and now.

“Amid all these numerous challenges, the Armed Forces of Liberia and other militaries in the region continue to uphold the tenants of democracy. The level of leadership would not have been possible without the preparation and leadership training obtained from the United States Army Command and General Staff College, which contributed immensely to our development as senior leaders,” Johnson said.

Portraits of the inductees unveiled during the ceremony will be hung in the International Hall of Fame Gallery on the third floor of the Lewis and Clark Center.

Watch the full ceremony on the CGSC Facebook page