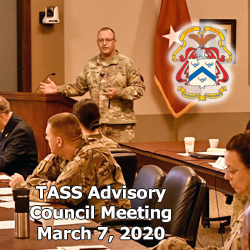 Leadership of the U.S. Army Command and General Staff College hosted the 2020 TASS Advisory Council Meeting (TACM) in the Arnold Conference Room of the Lewis and Clark Center on March 7, 2020.

Instructors in TASS teach the Command and General Staff Officer Course curriculum to Reserve Component officers and other enrolled officers who are not students in the resident course or one of the CGSC satellite school locations. At the outset of the meeting Lt. Col. Lenny Sloat, TASS coordinator for CGSS’s Department of Distance Education, reminded the attendees that the goal of the advisory council meeting is to create an operational level shared understanding of roles, responsibilities, policies, procedures, vision and products relative to the execution of TASS in the coming years.

In short, the TACM is intended to help achieve greater standardization and improve delivery of the CGSOC curriculum in the TASS schools. As CGSS Chief of Curriculum Mark McManigal briefed in his overview of the CGSOC course, the school’s purpose is “to develop highly competent and professional field grade General Staff Officers with the warfighting, historical, leadership and decision making expertise to enable Army combined arms formations to successfully execute multi-domain unified land operations in contested environment against peer threats.” The challenge is to ensure all CGSOC modalities – resident, satellite campus, distance learning, and TASS – are in synch.

In conversations with active Army officers, one quickly discovers there is typically a great focus on the resident course at Fort Leavenworth, but the reality clearly evident to an attendee at the TACM is that more officers are educated via the other modalities each year (approximately 1,200 student/year in resident vs. approximately 6,000/year in other modalities).

Topics tackled in this meeting included curriculum assessment process; roles and responsibilities of the resident course, Department of Distance Learning and TASS; faculty development education; survey standardization; student scheduling; and more, including an open forum at the end of the day during which attendees were able to bring up issues not covered in the meeting agenda.

During the lunch period, CGSC Foundation President/CEO Rod Cox delivered an information briefing to the attendees about the Foundation’s support to the resident students in order to elicit some input as to how the Foundation might better engage with students in the TASS system to enrich their CGSC experience in the areas of scholarship, Soldier/family issues, and outreach, specifically the alumni association program.

The TACM followed two days of TASS Faculty Development Program meetings, which were all supported by the Foundation with refreshments.