CGSOC Class of 2017 – Persons of the Month for June 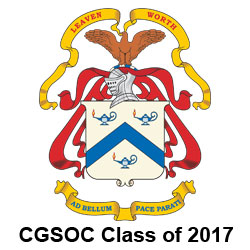 The CGSC Foundation has selected the 2017 graduating class of CGSC’s Command and General Staff Officer’s Course (CGSOC) as the Person(s) of the Month for June 2017. The class is scheduled to graduate June 9. The international officers badge ceremony is June 8.

The graduating class is comprised of 1,170 students: 752 from the active U.S. Army; 43 – National Guard; 99 – U.S. Army Reserve; 77 – U.S. Air Force; 37 – U.S. Navy; 27 – U.S. Marine Corps; one from the U.S. Coast Guard; 110 international officers representing 85 countries; and 15 from other U.S. government agencies, of which four are Army Civilian Corps employees. This represents the first-ever attendance of the Army Civilian Corps who attended this year’s course as part of a new civilian senior leader development program. Part of the total number of graduates also includes nine U.S. Army warrant officers – the first time since 2010 that warrant officers have attended the course.

The education all CGSOC students receive is on a graduate-level, but they also have the opportunity to enroll in the Master of Military Art and Science (MMAS) degree program. (CGSC is accredited by the Higher Learning Commission of the North Central Association of Colleges and Schools to award the master’s degree.) Participation in the degree component of CGSOC is voluntary since many come to Fort Leavenworth with masters, doctorates or professional degrees already in hand, or in progress. In the 2017 class, 139 students will be awarded the MMAS. – In addition to successful completion of the core elements of the course, MMAS candidates must pass an oral comprehensive exam, and write, then orally defend, a thesis based on their original research.

During every class year the CGSC Foundation hosts or sponsors events that create interaction between civilian visitors and the students of CGSC. Over the years, the civilian visitors have consistently commented on how impressed they are by the military men and women they meet. – The CGOC class of 2017 is no different. – Everyone that has come into contact with them has developed a great appreciation for the professionalism and commitment to excellence these students demonstrate.

It cannot be overstated that although CGSC represents a graduate-level education, CGSC students are anything but normal graduate students. Out of the 1,172 in the class, more than 1,000 have deployed to combat operations or other military engagements around the world. – They come into CGSC with a great deal of experience in their profession. They know both success and failure…and more importantly they know mission accomplishment. Graduation from CGSOC is a “mission accomplished,” but now the graduates must leave Fort Leavenworth this month to embark on new challenges and new missions around the world.

The CGSC Foundation salutes the Command and General Staff Officer Class of 2017 as we humbly recognize the entire class as the Persons of the Month for June 2017. We wish them well and thank them for their leadership and sacrifice for their respective countries.