CGSOC Class of 2021 kicks off with flag ceremony Sept. 8 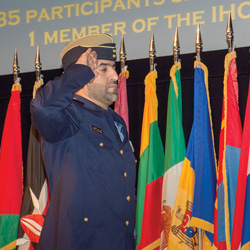 The Command and General Staff Officers Course 2021 began Sept. 8 at Fort Leavenworth with the International Military Student Flag Ceremony followed by the Commandant’s Address to students. 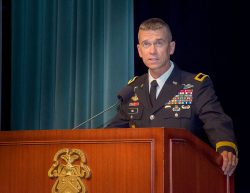 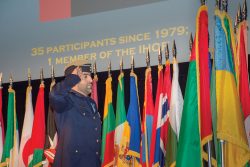 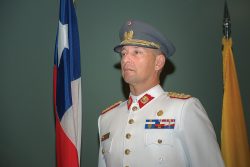 Lt. Col. Gonzalo Lopez, Chile, participates in the International Military Student Flag Ceremony on Sept. 8 marking the beginning of the academic year for the Command and General Staff College.

The Flag Ceremony was conducted in the college’s Eisenhower Auditorium. However, to promote social distancing and other protective measures, the audience watched via Facebook Live and internal closed circuit television

Flags of the United States and the 43 partner nations that have students attending this year’s class were posted following remarks by Brig. Gen. Donn H. Hill, Deputy Commandant of the Command and General Staff College and Deputy Commanding General-Education for the Combined Arms Center. Hill concluded his remarks with a challenge to international and U.S. students in the class.

“I challenge each and every one of you to the following. First, never stop learning. Take this year, especially, to refine your personal self-development plan. In the context of a career in the military, this year will be one of the best but only if you invest the effort to make it so,” said Hill.

“Lastly, build relationships with your classmates that will endure beyond this course. These are the officers you will serve with for the rest of your career, in peace and in war. Get to know them now. They will never let you down,” Hill concluded.

Later in the day, Lt. Gen. James Rainey, Commander of the Combined Arms Center and Fort Leavenworth and Commandant of the Command and General Staff College, talked to the class from the Eisenhower auditorium with a limited audience in the auditorium and most students observing from classrooms via closed circuit television.

Approximately 250 students of the nearly 1,100 member class are participating in the Common Core portion of the course from their homes and duty stations around the world before joining their classmates for the Advanced Operations Course and Electives following the Christmas and New Year’s holidays.

This split is necessary to continue observing COVID-19 protections through the early portion of the course. Students attending class in-person at Fort Leavenworth’s Lewis and Clark are using double classrooms to ensure the necessary space to practice social distancing. This effectively halves the number of classrooms available for CGSOC during the fall semester.

Although things look and feel different, the college remains devoted to providing the highest quality of Professional Military Education possible to its students.

Key Dates for Command and General Staff Officers Course 2021 (All dates are subject to change.)

For more photos of the international officers, see the album on the CGSC Flickr site