CGSOC Class of 2023 kicks off with flag ceremony Aug. 8

The Command and General Staff Officers Course Class of 2023 began Aug. 8 at Fort Leavenworth with the International Military Student Flag Ceremony followed by the commandant’s address to students. 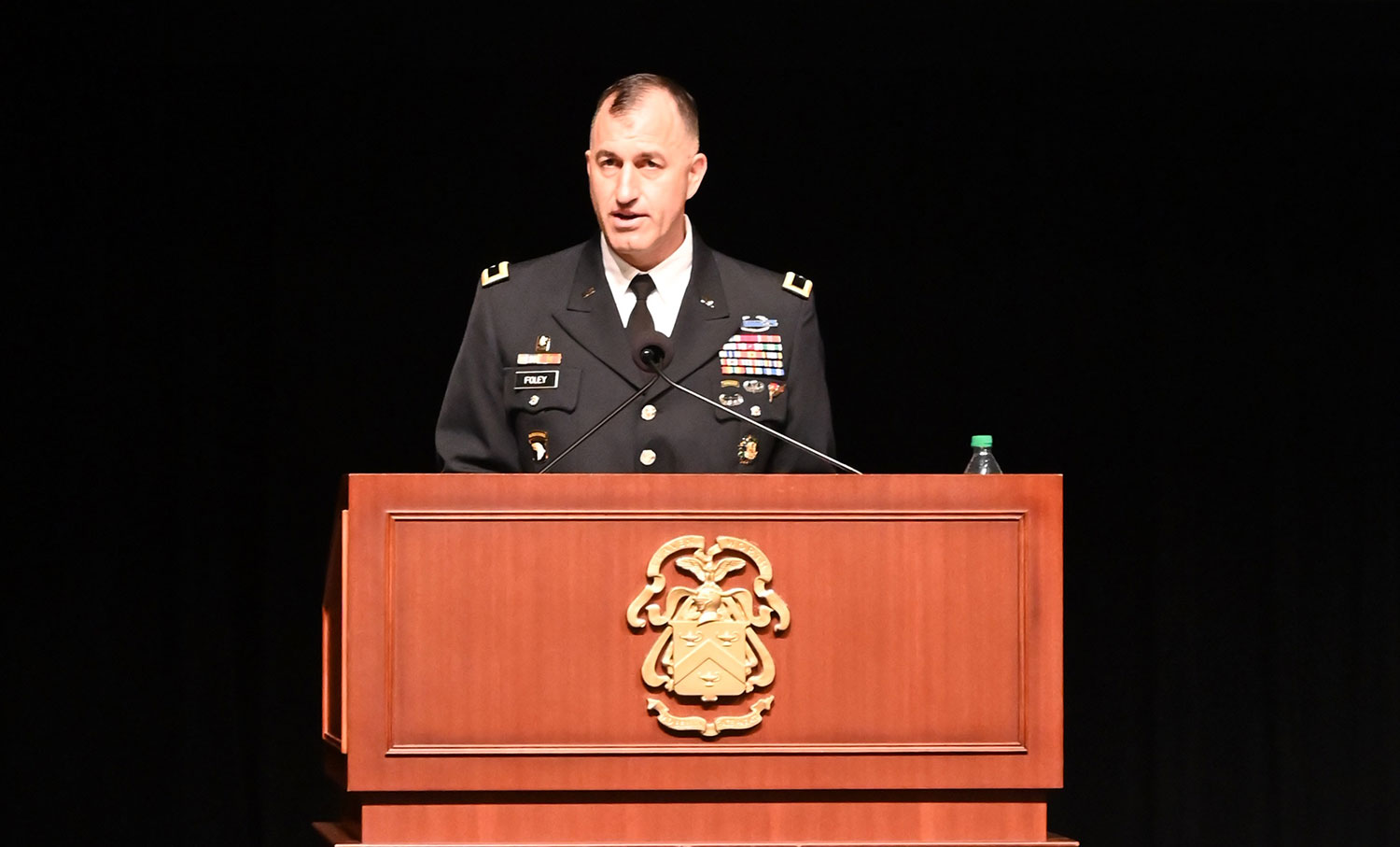 CGSC Deputy Commandant Brig. Gen. David Foley delivers remarks during the 2023 International Flag Ceremony on Aug. 8, 2022 in the Eisenhower Auditorium of the Lewis and Clark Center.

The Flag Ceremony was conducted in the college’s Eisenhower Auditorium and was hosted by CGSC Deputy Commandant Brig. Gen. David Foley. Flags of the United States and the 93 partner nations that have students attending this year’s class were posted following Foley’s remarks.

“It is appropriate to begin this course with the formal posting of the national colors of each of the countries that have accepted the invitation of the United States to send their very best officers for cooperative study along with our U.S. officers,” said Foley. “I can think of no better way to symbolize the aspirations of our various nations than the deliberate posting of our national colors at one time and place as a declaration of our commitment to use the coming year to advance our shared values and our shared interests.” 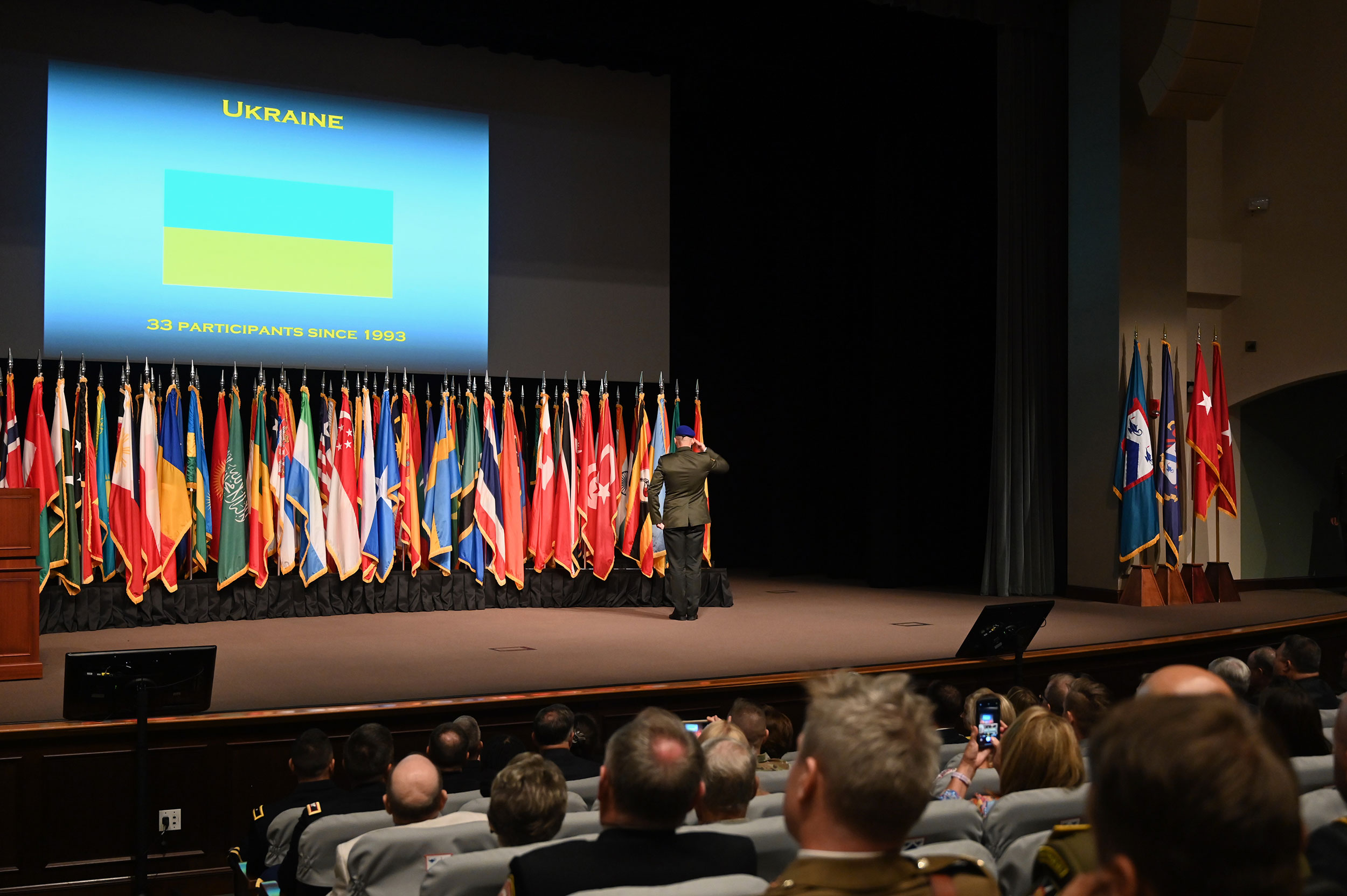 The international military student from Ukraine salutes after posting his nation’s flag during the 2023 International Flag Ceremony on Aug. 8, 2022 in the Eisenhower Auditorium of the Lewis and Clark Center.

Foley also mentioned that the Republic of Cyprus, an island country in the eastern Mediterranean Sea south of Turkey, will be posting their flag for the first time with their first officer to attend CGSOC at Fort Leavenworth. Not specifically mentioned in Foley’s remarks was the presence of an officer from Ukraine in the class, despite the war being conducted in his home country.

Later in the day, Lt. Gen. Lt. Gen. Theodore D. Martin, Commander of the Combined Arms Center and Fort Leavenworth and Commandant of the Command and General Staff College, spoke with the class in the Eisenhower auditorium.

In addition to the 122 international students representing 93 countries, the CGSOC Class of 2023 includes more than 1080 students, including mid-career officers from all branches of the U.S. Armed Forces as well as 11 federal government civilian employees.

Active component U.S. Army officers make up the preponderance of the class with 771 students, with an additional 33 from the Army National Guard and 38 from the Army Reserve.

There are 74 U.S. Air Force students, 5 U.S. Navy, 27 U.S. Marine Corps and one officer from the U.S. Coast Guard. Additionally, seven civilian employees from various federal agencies and four Department of the Army Civilian employees are attending this year.

International military education at Fort Leavenworth began in 1894. Since then, more than 8,000 International Military Students from 166 countries have attended classes alongside their United States counterparts. CGSC’s international graduates have been extremely successful in their military careers. Nearly half achieve general officer rank. The college’s International Hall of Fame includes 282 International graduates from 73 countries who, through military merit, have achieved the position of Chief of their nation’s Army or higher. Twenty-seven of these graduates became heads of state. 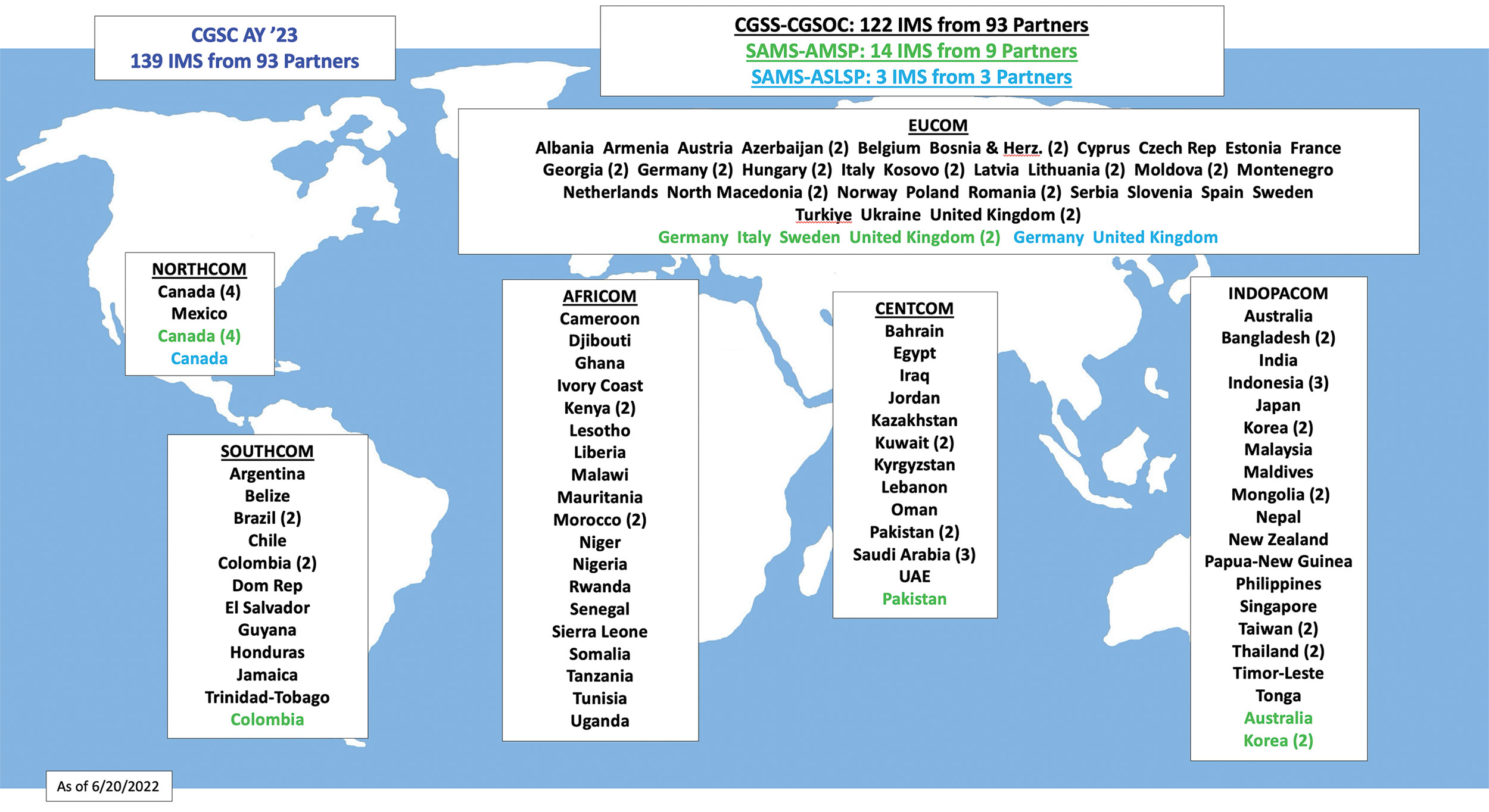