CGSS director is Person of the Month – July 2019 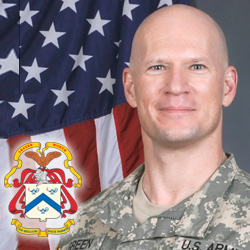 The CGSC Foundation has selected Col. Scott A. Green, director of the Command and General Staff School (CGSS), as the Person of the Month for July 2019.

Green recently assumed duty as the CGSS director after serving as the director of the CGSC Department of Army Tactics (DTAC) since July 2018.

“The Foundation has a great deal of appreciation for the school director position,” said Foundation President/CEO Rod Cox. “Most of the programs we support go through the director’s office in some way and having a great working relationship is key. I came to know Col. Green when he was the DTAC director and worked with him on several VIP visits, to include a visit from the Kansas City Chiefs Ambassadors. The Foundation looks forward to a great working relationship with Col. Green and the CGSS staff in support of the CGSS students and their families.”

Col. Green was assigned to CGSC/Fort Leavenworth in July 2018 after serving as the U.S. Army Alaska chief of staff and commander of the 4th Brigade Combat Team (Airborne), 25th Infantry Division at Joint Base Elmendorf-Richardson in Alaska.

Green began his Army career as a Distinguished Military Graduate of the ROTC program at the South Dakota School of Mines and Technology in Rapid City, S.D. Commissioned into the infantry Green was first assigned to Camp Casey in South Korea where he served as both a rifle and support platoon leader. After his duty in Korea he was assigned to the 2nd Battalion, 75th Ranger Regiment at Fort Lewis, Wash., where he served as a support platoon leader and rifle platoon leader. Upon completion of the Infantry Officer Advanced Course, he worked as the brigade assistant operations officer in the 504th Parachute Infantry Regiment (PIR), 82nd Airborne Division, at Fort Bragg, N.C.

Following assignment at Fort Lewis, Col. Green returned to Fort Leavenworth with duty in the Battle Command Training Program (BCTP), where he served as an observer/trainer and chief of the Movement and Maneuver Warfighting Function for Operations Group Alpha. Following his assignment with BCTP, Col. Green then commanded 1st Battalion, 12th Infantry Regiment (Light) from August 2010 to February 2013 and deployed the battalion to the Kunar and Nuristan Provinces of Afghanistan in 2012. Following relinquishment of command, Col. Green attended the U.S. Army War College in Carlisle Barracks, Pa., with his follow-on duties in Alaska.

We are proud to recognize Col. Green as the CGSC Foundation’s “Person of the Month” for July 2019. We look forward to continue working with him and his staff as we all endeavor to make each student’s experience the best at CGSC.