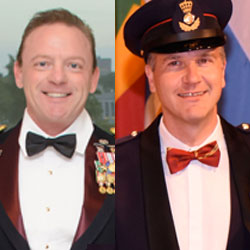 The CGSC Foundation has selected the student leaders of the Command and General Staff School Class of 2017 as the Persons of the Month for November 2017 – U.S. Class President Lt. Col. Gerald “Wayne” Surrett, M.D., and International Military Student (IMS) Chief of Staff, Maj. René Berendsen from the Netherlands.

“The positions of class president and international officer chief of staff are extra duties,” said CGSC Foundation CEO Doug Tystad. “These officers are responsible for a tremendous amount of administrative work while participating in all the same course requirements as their classmates. Our recognition of them as our ‘Persons of the Month’ is our way of thanking them for all that they do…and frankly, from my experience, these folks aren’t typically well-known amongst their classmates, so maybe this recognition will provide an introduction of sorts.”

The CGSC Student Handbook outlines the duties of these class leadership positions. – The class president serves as the spokesperson for the class and assists CGSC’s U.S. Student Division staff in matters pertaining to the class. The class president also guides and directs participation in class projects, social, athletic, community and post activities.

From a look at their backgrounds, Lt. Col. Surrett and Maj. Berendsen are more than prepared for their duties.

Lt. Col. Wayne Surrett is a military physician whose most recent assignment was as the Group Surgeon for the 10th Special Forces Group at Fort Carson, Colorado.

Class of 2018 U.S. Class President Lt. Col. Gerald “Wayne” Surrett, M.D., as he arrived at the Celebration of International Friendship Sept. 29 at the Kauffman Center for Performing Arts in Kansas City, Mo.

Surrett initially enlisted in the Army in 1991, attending infantry and airborne training at Fort Benning, Georgia. He was later selected as a Special Forces soldier, becoming an SF engineer and demolitions sergeant. After a few deployments to South and Central America, he reclassified as an SF medic, ultimately deciding that medicine would be his path.

He returned to school, graduating from the University of Maryland in 1999 with a bachelor’s in physiology and neurobiology. He was accepted to medical school and completed his degree at the Uniformed Services University of the Health Sciences in Bethesda, Maryland. He completed his residency in family medicine in 2006 and was subsequently assigned to the 2nd Infantry Division as the 2nd Brigade Surgeon during which he deployed to Iraq for a 15-month tour. After returning home, he was assigned as the 3rd Battalion, 10th Special Forces Group Surgeon and served another combat tour in Iraq.

Surrett was with the 3rd Battalion for four years, deploying to Africa, the Middle East, Central Asia and Europe. After this assignment he became the diving medical officer for the Special Operations Forces Underwater Operations School in Key West, Florida, after completing both the Navy Dive Medical Officer Course and the Army Combat Dive School. After two years, Surrett completed a yearlong fellowship entitled the “Emergency Medicine Fellowship in Austere and Wilderness Medicine.” This experience was key in his selection as the Command Surgeon of the 10th Special Forces Group back at Fort Carson.

In addition to his special training and skills acquired in his infantry and SF training, Surrett is board certified in Family Medicine. He is an avid mountain biker and scuba diver and enjoys spending time with his wife Tammy and their two sons who remain in Colorado.

Maj. René Berendsen enlisted in the Royal Netherlands Army (RNLA) in August 1994, completing his initial infantry training, earning his red beret and an assignment to the 11th Airmobile Brigade. He was promoted through the ranks to sergeant and deployed to Bosnia during that time. 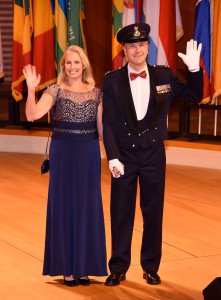 International Military Student Chief of Staff, Maj. René Berendsen and wife Bianca and from the Netherlands, as they are introduced during the Celebration of International Friendship in Kansas City Sept. 29.

After his tour with the Airmobile Brigade ended, Berendsen requested assignment to the Armored Infantry Brigade in Seedorf, Germany, to broaden his infantry skills. Two years after arriving in that unit, he had the opportunity to attend the Royal Netherlands Military Academy to become an officer. He was commissioned in 2004 with his first assignment as a platoon leader in the 42nd Battalion, Regiment “Limburgse Jagers,” back in Seedorf. He soon deployed to Iraq leading his platoon in combat.

After his combat tour, Berendsen was assigned to the Royal Netherlands Army Training Command to train and educate young soldiers. During this assignment he also served in the Centre of Expertise of the Royal Netherlands Training Command from 2008-2010. After four years in the training command, Berendsen took command of the Staff Company of 45th Armored Infantry Battalion, Regiment Infantry “Orange Gelderland.” In this assignment he was directed to reorganize the company into a support company with anti-tank, mortars and reconnaissance capabilities. From 2013-2015, he was the first company commander for this type of company and assisted the RNLA with creating a new unit identity and developing doctrine.

Berendsen lives in military quarters on Fort Leavenworth and enjoys spending time with his wife Bianca and their two daughters.

We salute Lt. Col. Surrett and Major Berendsen for their selection to the U.S. Army Command and General Staff College and for their leadership of the Class of 2018. They are truly deserving of our recognition as “Persons of the Month” for November 2017.