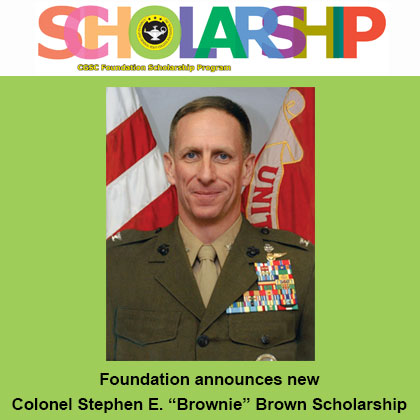 The CGSC Foundation announces a new component of its competitive scholarship program for relatives of U.S. Army Command and General Staff College alumni and others who are Life Members of the Foundation’s Alumni Association. The new Colonel Stephen E. “Brownie” Brown Scholarship will be available to applicants in the 2023 scholarship application window which will open in January 2023.

The Colonel Stephen E. “Brownie” Brown Scholarship will award scholarships up to $5,000 for selected applicants. 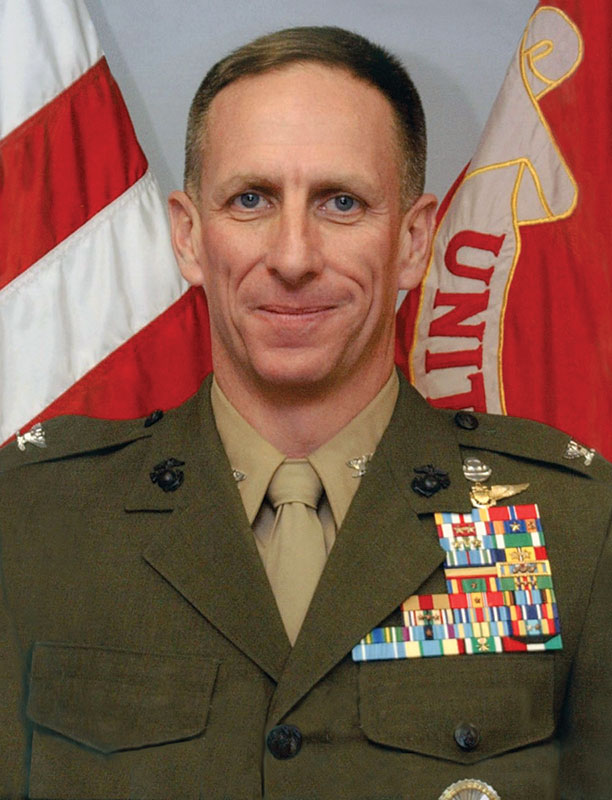 The Colonel Stephen E. “Brownie” Brown Scholarship is named in honor of a U.S. Marine officer who retired from active duty in February 2009 and became an instructor at the U.S. Army Command and General Staff College in 2010. Due to medical complications from Spinocerebellar Ataxia (SCA), Brown retired from teaching at CGSC and currently lives in Stillwell, Kansas. His network of lifelong friends approached the CGSC Foundation to establish the scholarship in Brown’s name to honor his lifetime of service and their friendship.

“I have known Steve practically my entire life and have always known him as a man of courage, strength, integrity and determination,” said Tim Burns, the current CEO of Preco, LLC in Kansas City, who took on the role of organizing all of Brown’s friends and working with the Foundation to set up the scholarship. “He has demonstrated these qualities throughout our years of growing up, as a Marine fighting in numerous wars as a Cobra attack helicopter pilot, and now in his fight with SCA disease. We all wanted to do something magnanimous as an expression of our thanks and honor to Steve and his family.” 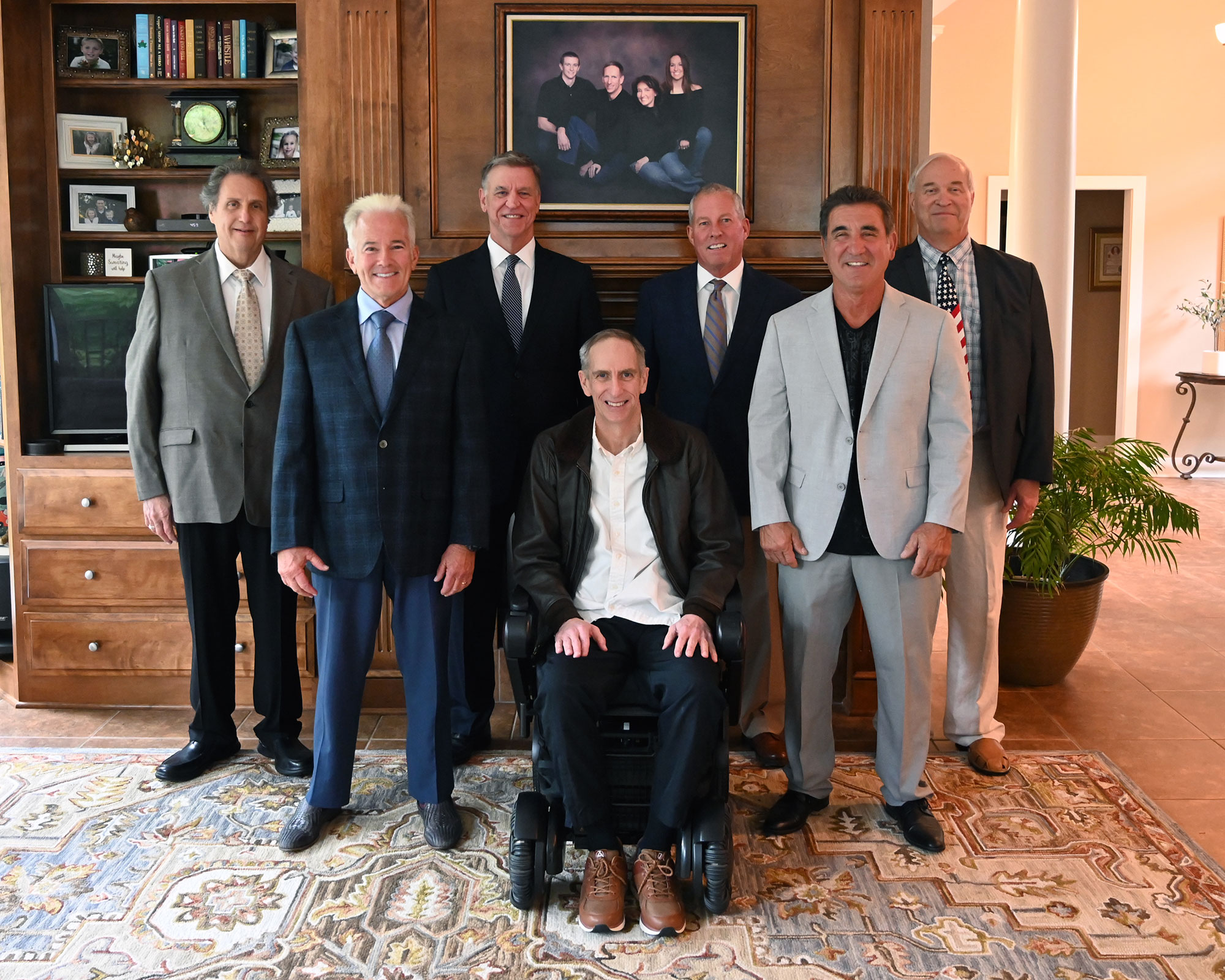 It is impressive that Brown has maintained friendships with guys who all grew up within blocks of each other in the Kansas City, Missouri adjacent neighborhoods of Birchwood Hills, St. Catherine’s Gardens and Royal Oaks. All of them attended St. Catherine’s Grade School or Westridge Elementary School, Baptiste Junior High and Bishop O’Hara High School together. According to Burns the whole group of them and their wives still hang out together.

“I’ve known Steve since we were 8 years old and have been best friends with him all of these years,” said long-time friend Bob Leo, who currently works in construction in the Kansas City area and went to junior high and high school with Brown and played on the same football teams with him. “I think Steve is very deserving to have a scholarship in his name because he has been very loyal to his country. Steve is a person that always has your back no matter what and he is caring and witty. When it came to the Marine Corps I knew that there would never be anybody better for the Marines than Steve Brown! Steve is a wonderful husband and father to his kids. He lives for his family and it shows how well his children have turned out. Steve’s wife Susan is a saint who has taken care of Steve in this tough time. All in all, I’m proud to call him my pal…Pals forever!”

After high school, Brown attended Rockhurst University (he and Burns were there together for the first two years) graduating with a pre-law (Administration of Justice) degree in January 1979. During the 1978 and 1979 summers Brown attended Officer Candidate School at Quantico, Va. Brown then attended the USMC Platoon Leaders Course in Quantico, beginning a 30-year career during which he flew Cobra attack helicopters, and led Marines through practically every conflict the U.S. participated in during those 30 years. In the 1980s Brown served in Beirut, Grenada, Honduras, the Persian Gulf and Panama; in the 1990’s he deployed to Desert Shield and participated in combat operations in Desert Storm and Somalia; and in the 2000’s he participated in combat action in Iraq and Afghanistan, with his final deployment to the Al Anbar Province in Iraq as the “Air Boss” for Camp Al-Taqaddum Air Base in 2008. 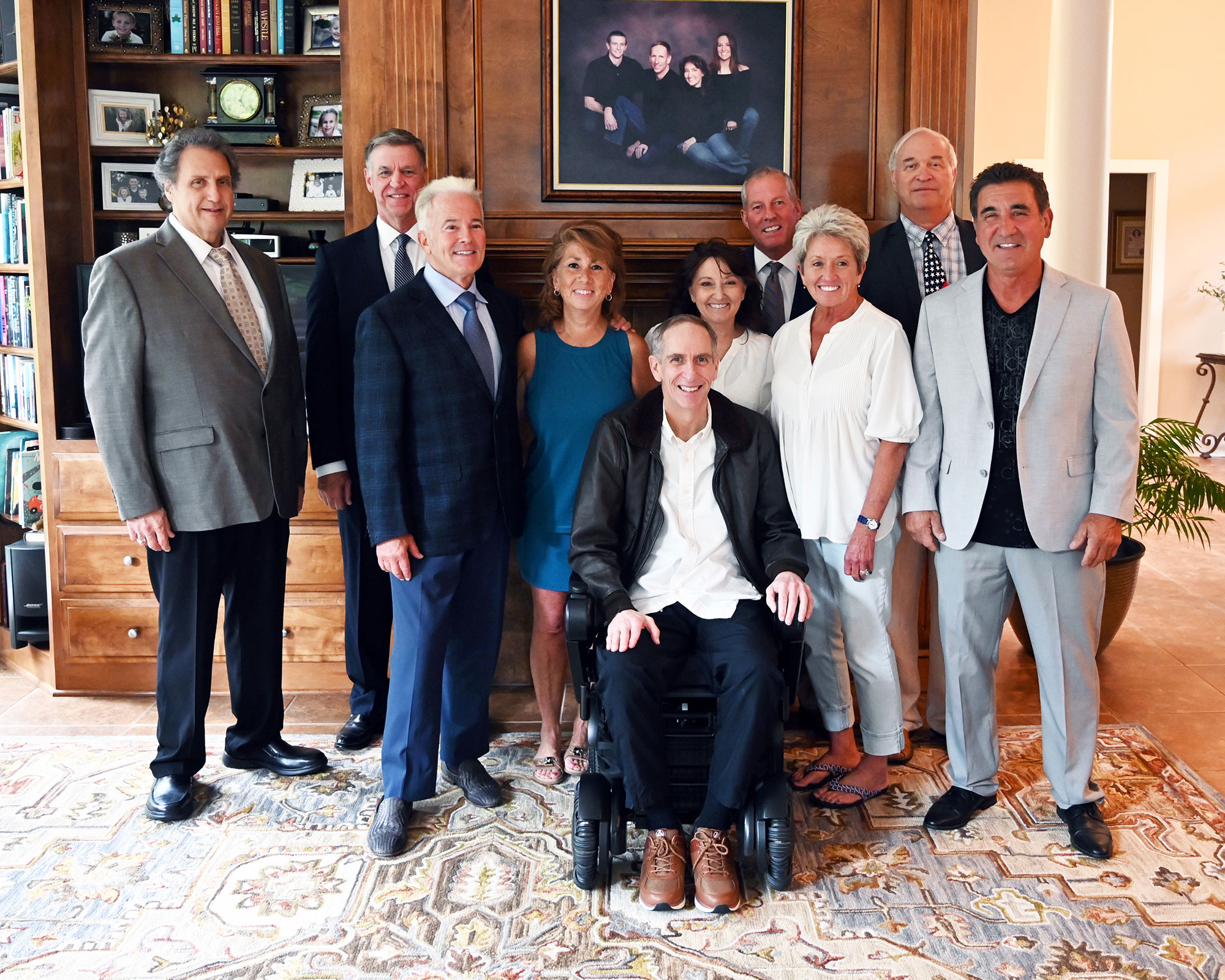 After his official retirement in February 2009, Brown completed his master’s degree in education and began teaching and coaching football at Blue Valley North High School in Overland Park, Kansas. He taught social studies and coached there until November 2010 when he joined the faculty of the U.S. Army Command and General Staff College (CGSC) in the Department of Joint, Interagency and Multinational Operations. The SCA disease began affecting his ability to teach effectively in the 2018 academic year which forced him to retire from CGSC.

“SCA is neurological and progressive like ALS,” said Brown. “I was having trouble walking and talking so I retired. It was a race between my condition worsening and a disabled retirement. I saw six neurologists from four different sources and got the same diagnosis, so I retired disabled in 2018. I couldn’t teach any more effectively. The cause of my SCA is unknown – the Navy says it may be from too many concussions, the VA also says the cause is unknown, but neurologists there think it could be the result of poison.”

Brown uses a wheelchair to move around these days and has trouble speaking to a degree, but is as mentally sharp as he ever was. He’s excited about the scholarship and the chance to help military kids get an education. Although the scholarship is in his name, he says he likes to focus on “unit awards” and not individual awards and accolades. He shifts the focus from himself to his friends who have been the founders and initial donors for the scholarship.

“One theme stands out to me – loyalty,” Brown said. “The donors are more than friends since grade school. We are family. The same is true for their wives because we were classmates as well. We also have several USMC and civilian friends we’ve known for decades, many of whom have come to visit when they learned about my ‘deal.’”

During the process of putting the details of the scholarship together and capturing his story, Brown made a point to mention the wives of his friends. He met his wife Susan when they were teenagers and has known all of the other wives nearly as long as the guys. He says they all come over to help Susan with his care. Marianne Burns visits him every Friday to give him communion in the Catholic tradition.

“I have known Steve since pee wee football in fourth grade,” said Jerry Wiedenmann, owner of Wiedenmann Inc., a construction company in Belton, Missouri. “We played together on multiple grade school teams. My family moved away in my high school years, so I lost track of Steve, but always kept close to our circle of friends. After high school and college most of us went on and chased our dreams in all types of careers and business adventures. Steve chose the Marine Corps. While defending our freedom he and his wife Susie also raised a beautiful family. So, my wife Susan and I feel it is fitting to honor Steve’s legacy with a scholarship fund that will help young men and women to advance in the Corps that Steve so dearly loved and served.”

Col. (USMC Ret.) Michael G. McCoy, a member of the CGSC Foundation board of trustees, assisted the Foundation with connecting with Brown and his civilian friends to help bring this new scholarship to fruition.

“As a fellow Marine and friend for almost 30 years, I can testify to Steve’s character, integrity, and grit that epitomize his contribution not only to our Corps and nation, but also across the communities and organizations that he has served,” McCoy said.  “Brownie has been a significant influence on generations of warfighters across all services and has been a leader and mentor for everyone that he has touched over decades of selfless service to our nation and to those around him. I had the distinct honor to serve with Steve at CGSC as the senior Marine and observed firsthand the impact of his leadership and wisdom. As a trustee for the CGSC Foundation, I am humbled to have a small part of representing and contributing to this scholarship in Colonel Brown’s honor on behalf of all Marines that ‘Brownie’ has influenced. A true patriot, great American, Marine, father, and friend, Steve’s legacy through this scholarship will represent the virtue, grit and tenacity that will influence generations to come!”

The CGSC Foundation’s scholarship program is open to high school seniors who will begin their college studies in 2023 and for undergraduate college students in the first three years of their studies (freshman through junior) returning to school. The students must be family members of Life Members of the Foundation’s Alumni Association. The members of the Alumni Association include not only active duty, veterans and retirees from all the military services, but also government civilian staff and faculty, and graduates of various programs of the CGSC Foundation are eligible to join.

The application window for the 2023 Scholarship competition will open Jan. 3, 2023. The deadline for applications is midnight on March 15, 2023. Judging will occur March 16-31 and the Foundation will announce the winners on April 13, 2023.

The application will be posted on the CGSC Foundation website at www.cgscfoundation.org/scholarships on Jan. 3, 2023. A link to join the Alumni Association as a Life Member is also on the page for those that need to join before their relatives apply. 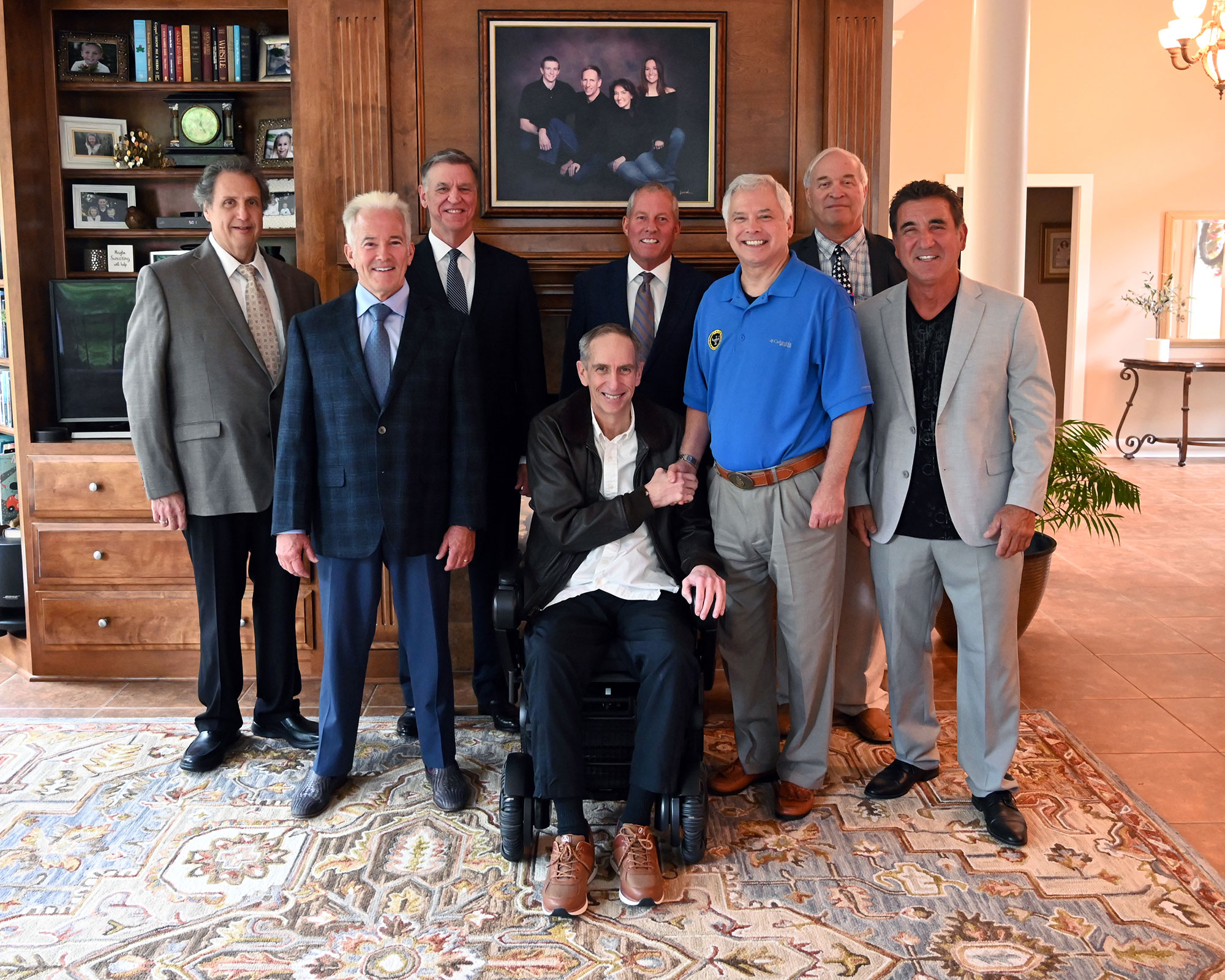