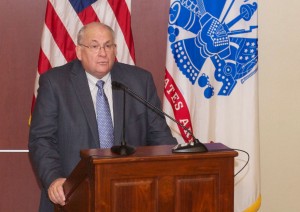 “Dr. Jim Willbanks is an absolute treasure for the College and the Foundation as well,” said CGSC Foundation CEO Doug Tystad.   “He makes things happen and has been a stalwart force in not only leading his department, but also extending its reach through two successful after-hours lecture series the Foundation has been supporting.”

“When we need a historical reference or some other assist, Jim is one we can count on. Also, one of his instructors, Bud Meador, is our liaison to the College – a level of support as a result of Jim’s leadership that can’t be overstated.”

Dr. Willbanks has been on the CGSC faculty since 1992, when he retired from the Army as a lieutenant colonel. He has been the director of the military history department for the past 11 years. CGSC Deputy Commandant Brig. Gen. John Kem recently announced that Dr. Willbanks will occupy the General of the Army George C. Marshall Chair of Military History on a fulltime basis. (A new director for the Department of Military History has yet to be named.) Brig. Kem said this appointment is in recognition of Dr. Willbanks’ achievements as a scholar, contributions to leader development, service to the Nation, and the U.S. Army and the Command and General Staff College. A full article on Dr. Willbanks and his new appointment will be published in the spring edition of the Foundation News in May 2016.

We salute Dr. Jim Willbanks for his superb leadership of his department, his nationally-recognized scholarship on the Vietnam War, and his steadfast support and friendship to all of us in the CGSC Foundation.