New Emeritus Trustees selected as Persons of the Month – November 2016

The CGSC Foundation has selected the two newly-selected Emeritus Trustee members of the board as the Persons of the Month for November 2016 – Brig. Gen. (Ret.) William West and Mark “Ranger” Jones.

General West retired from active service in 1995 after almost 35 years’ service as an armor officer. He served two tours in Vietnam and repeated tours in Germany. He commanded at all levels from platoon to brigade and as an assistant division commander and corps chief of staff. His final assignment was as an appropriation director in the office of the Assistant Secretary of the Army, Comptroller. He is active in community service as a regional bank director, a member of a community development corporation and other not-for-profit organizations.

Jones is the long-serving Vice President for Development of the Foundation. His networking and fundraising abilities have assisted the Foundation in securing key contributions to programs such as the Simons Center, the General Hugh Shelton Chair in Ethics, the Distinguished Leadership Award program and others. 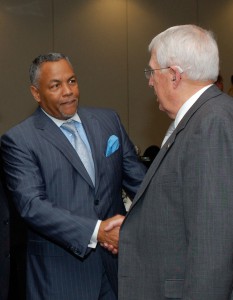 Jones is a retired master sergeant and chief executive officer of the Ranger Group, a company he started just a few months after retiring from the Army. The Ranger Group began as a security firm and grew to include work in construction and information technology. On active duty Jones served in the U.S. Army Rangers where he earned his nickname “Ranger” for his dedication and hard work. To this day, Ranger Jones remains the only Airborne and High Altitude, Low Opening (HALO) jump-qualified cook in U.S. Army history. He has more than 4,000 jumps to his credit. Jones also served in Operation Desert Shield/Storm and the Haitian Campaign. He later went on to become a senior aide to the Chairman of the Joint Chiefs of Staff, General Hugh Shelton. In addition to leading his company, Jones works tirelessly in support of veterans, serving on the boards of such nonprofits as the Fisher House Foundation.

We salute Brig. Gen. (Ret.) Bill West and Ranger Jones for their service as trustees of the CGSC Foundation and their recent selection as Emeritus Trustees. They are more than deserving of our recognition as “Persons of the Month” for November 2016.