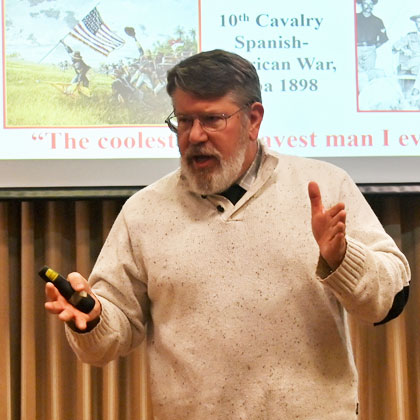 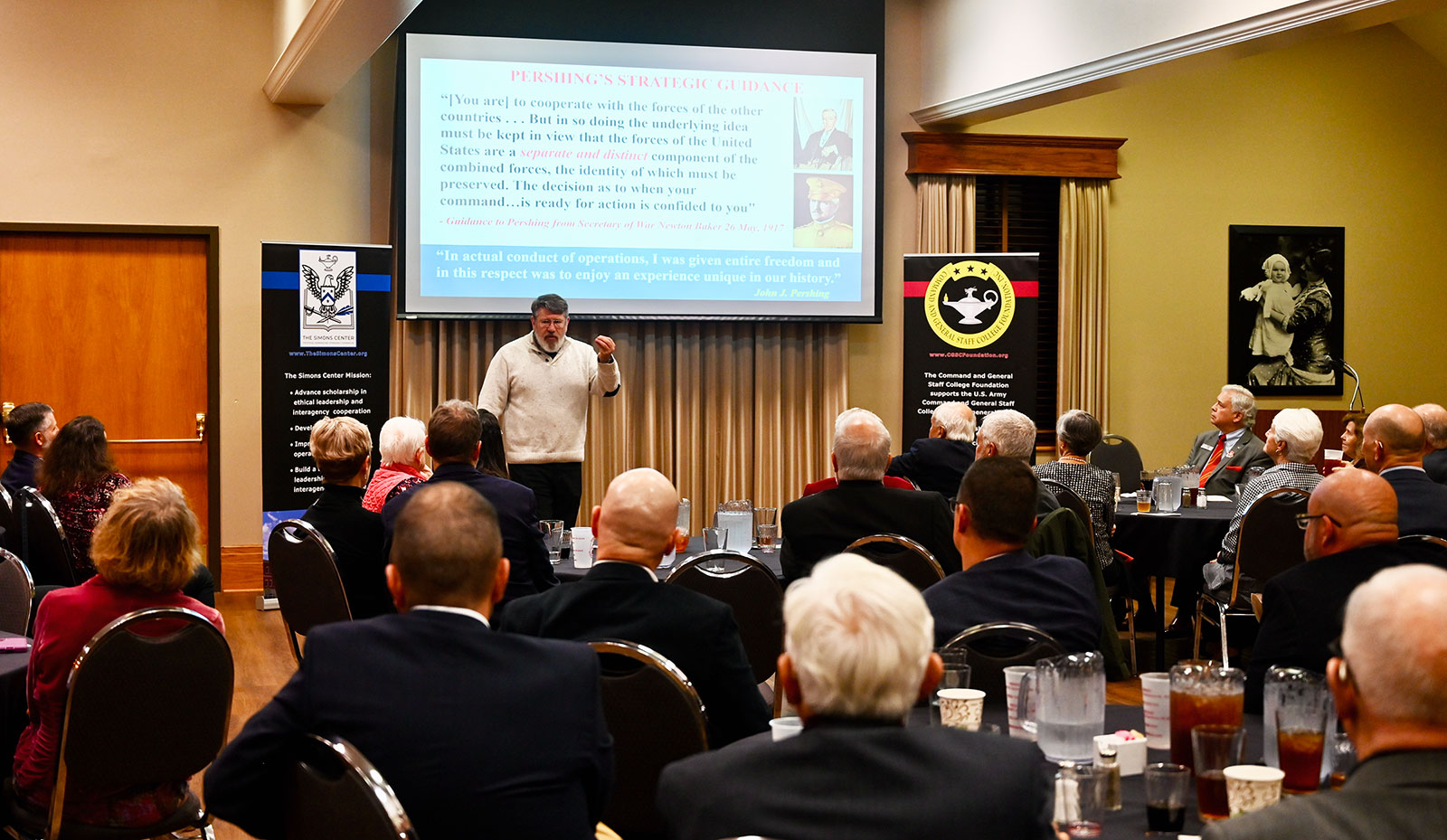 The CGSC Foundation and its Simons Center hosted the third and final lecture of the 2022 Distinguished Speaker Series at the Riverfront Community Center in downtown Leavenworth, Kansas on Nov. 9, 2022. In this last lecture of the series for the year Dr. Richard S. Faulkner, professor of military history at the U.S. Army Command and General Staff College, discussed the leadership challenges of Gen. John J. Pershing. This lecture is also the 20th lecture in the General of the Armies John J. Pershing Great War Centennial Series which the Foundation has conducted since 2014 in recognition of the centennial of the Great War.

(Top photo and above) Dr. Richard S. Faulkner, professor of military history at the U.S. Army Command and General Staff College, delivers his presentation on Gen. John J. Pershing at the Distinguished Speaker Series event hosted by the CGSC Foundation and its Simons Center on Nov. 9, 2022, at the Riverfront Community Center in downtown Leavenworth, Kansas.

The evening began with a reception, followed by CGSC Foundation President/CEO Rod Cox making welcome remarks and inviting everyone to dinner. Toward the end of the dinner period Cox recognized the sponsors for the evening and introduced Faulkner.

Faulkner walked the audience through Pershing’s military career, from his beginnings as a cadet in the U.S. Military Academy Class of 1886, through Indian wars in 1887-1890 with the 6th Cavalry, and assignment as a professor of military science and tactics at the University of Nebraska-Lincloln from 1891-1895. In 1897, Pershing returned to West Point as a tactical instructor where he quickly earned the reputation as a strict task master who was very unpopular with the cadets. In 1898 he fought in the Spanish American War in Cuba with the 10th Cavalry, and in the Moro Rebellion in the Philippines from 1899-1903. In 1903, Pershing was assigned to the Army General Staff, attended the Army War College in 1904 and was subsequently assigned as military attache in Tokyo in 1905 at the behest of President Theodore Roosevelt. During his time in Japan, Pershing was an observer in the Russo-Japanese War. That same year Pershing also married the daughter of U.S. Senator Francis Warren from Wyoming, who would continue to mentor Pershing the remainder of his career. Later in 1905 he returned to the U.S. and President Roosevelt nominated him as a brigadier general which was approved. Pershing’s promotion from captain to brigadier general was unusual, but there were other junior officers who received the same promotion ahead of their peers and some superiors. Faulkner jokingly referred to this promotion as “talent management” in a nod to the modern Army’s approach to managing officers.

In 1913, Pershing took command of the 8th Brigade at the Presidio in San Francisco but was soon deployed to Fort Bliss, Texas in April 1914 to deal with the conflict on the border with Mexico. In August 1915, he was still in Texas when he received notice that his wife and three young daughters had died of smoke inhalation in a house fire. Only his 5-year-old son survived. Pershing went back and buried his family then returned to Fort Bliss with his son and his sister and resumed command of the brigade.

In March 1916 Pershing led an expedition into Mexico to capture Pancho Villa. He organized and commanded the Mexican Punitive Expedition until February 1917, effectively “escaping his sorrow from losing his wife and daughters through duty,” as Faulkner put it.

As the U.S. was beginning its involvement in World War I, President Woodrow Wilson selected Pershing, then a major general, to command of the American Expeditionary Force (AEF), and promoted him to full general in October 1917, bypassing the rank of lieutenant general. 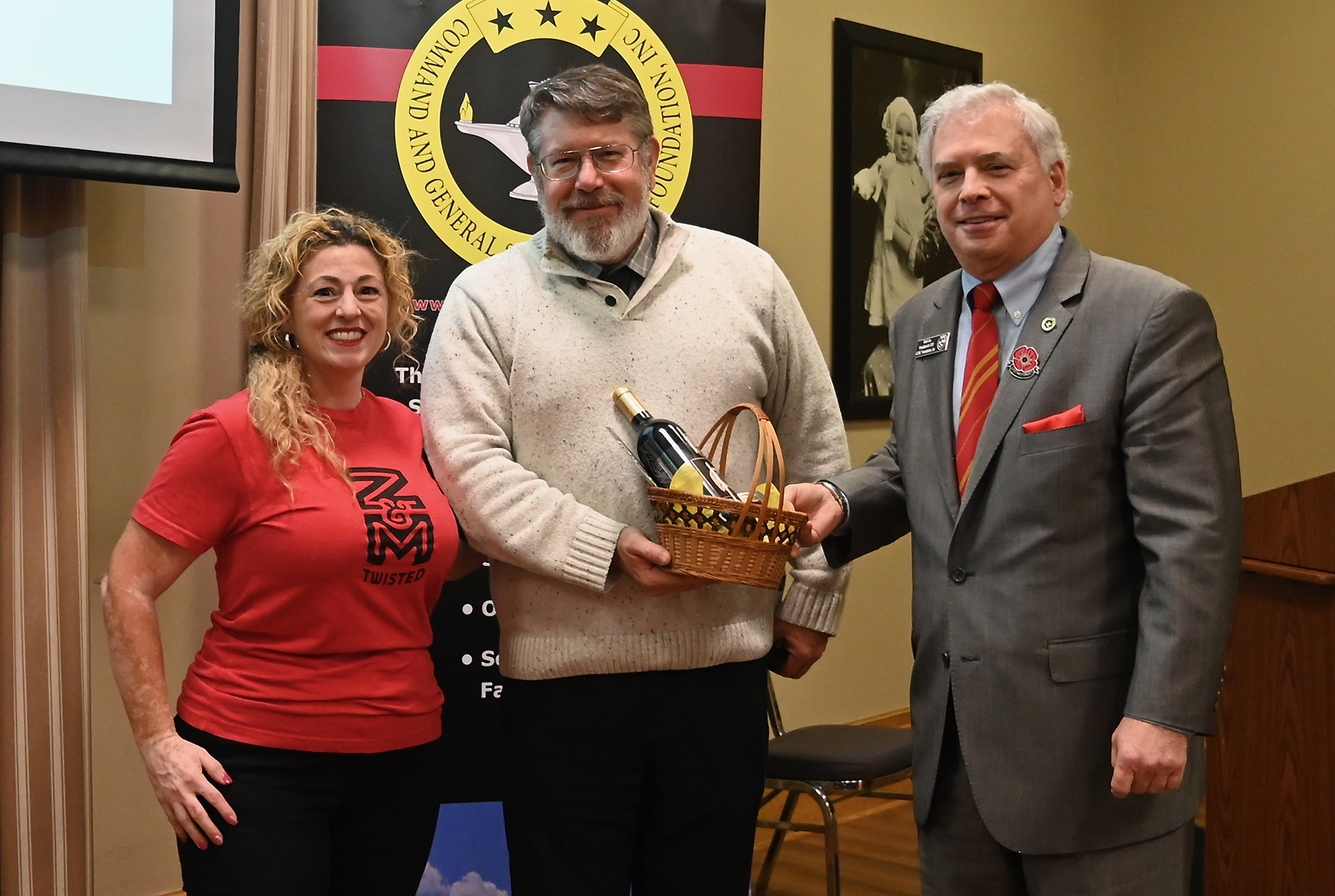 As revealed in his career assignment history prior to World War I, Faulkner said Pershing, like his peers, was an officer fully immersed in the realities and mindsets of a small constabulary army. Finally, after a lifetime of fighting limited wars and insurgencies, in 1918 he found himself serving as the commander of a two-million-soldier army waging mass conventional warfare.

Faulkner shifted his presentation to Pershing’s efforts to organize, equip and train his forces, with the full support of the president and the secretary of war. Faulkner said the Army began with less than 220,000 soldiers and a lack of modern weapons and organization. Additionally he said the Army possessed a severe lack of senior command and staff experience or any experience with large conventional war or how tactics had evolved since 1914. The Army had to reorganize and equip differently to change from a constabulary to a modern Army. As an example, the size of infantry platoons nearly doubled, going from one officer, five NCOs and 28 soldiers to one officer, 11 NCOs and 47 soldiers. Meanwhile Pershing also had to assemble the leaders he needed to lead this new force. After some initial failures and fits and starts, the AEF joined the fight in the summer of 1918, first in the Second Battle of the Marne in July 1918, then at Saint Mihiel from Sept. 12-16, and in the Meuse-Argonne from Sept. 26 until the Armistice of Nov. 11, 1918.

Faulkner summed the Meuse Argonne battle up as “winning ugly.” He said it was the largest campaign in American history with 1.2 million troops involved, but suffering 26,217 killed or dying of wounds and 95,786 wounded in action. Pershing and the AEF had achieved the president’s strategic goals, Faulkner said, and “winning ugly is still winning.”

At the conclusion of his presentation, Dr. Faulkner answered questions from the audience. Cox also presented him with a wine basket from sponsor Gina Zesiger, co-owner of Z&M Twisted Vines Winery and Vineyard, in appreciation for his presentation.

Dr. Richard S. Faulkner is a professor of military history at the U.S. Army Command and General Staff College. Prior to teaching at CGSC for the last 20 years, he served 23 years in the U.S. Army, most notably as a tank company commander in the 1st Armored Division during Operation Desert Storm. Faulkner is the author of The School of Hard Knocks: Combat Leadership in the American Expeditionary Forces (Texas A&M Press, 2012), which was the recipient of the Society for Military History’s 2013 Distinguished Book Award. His second book, Pershing’s Crusaders: The American Soldier in World War I (University Press of Kansas, 2017) received the World War I Association’s 2017 Norman B. Tomlinson, Jr. Prize for the best work of history in English on World War One, the Organization of American Historians’ 2017 Richard W. Leopold Prize, and the Army Historical Foundation’s 2017 Excellence in U.S. Army History Book Award.

This lecture was part of the Distinguished Speaker Series presented by the CGSC Foundation’s Simons Center for Ethical Leadership and Interagency Cooperation. The first event in the series was presented in May as a Vietnam War Commemoration Lecture with Dr. James H. Willbanks as the lecturer. The second event in the 2022 Distinguished Speaker Series was conducted Sept. 21, and featured a presentation by Dr. Harry S. Laver on Gen. U.S. Grant. The Foundation is planning for a continuation of the series in 2023.

Because of the topic of this lecture it was also conducted as the 20th lecture in the General of the Armies John J. Pershing Great War Centennial Series. Lectures in the series are intended to foster understanding of this world-changing conflict during its 100-year commemoration which the United States and other nations around the world officially conducted from 2014-2018. The World War I Centennial Commission Act was passed in January 2013 (Public Law 112-272) and officially ended in July 2019. As part of the commission’s efforts to honor the heroism and sacrifice of Americans who served in WWI, the National WWI Memorial in Washington, D.C., was built and officially opened in April 2021. The CGSC Foundation and the CGSC Department of Military History continue to host lectures in the series to educate the public and continue to honor those who served in the war.