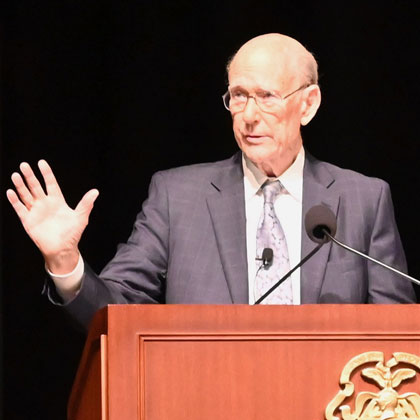 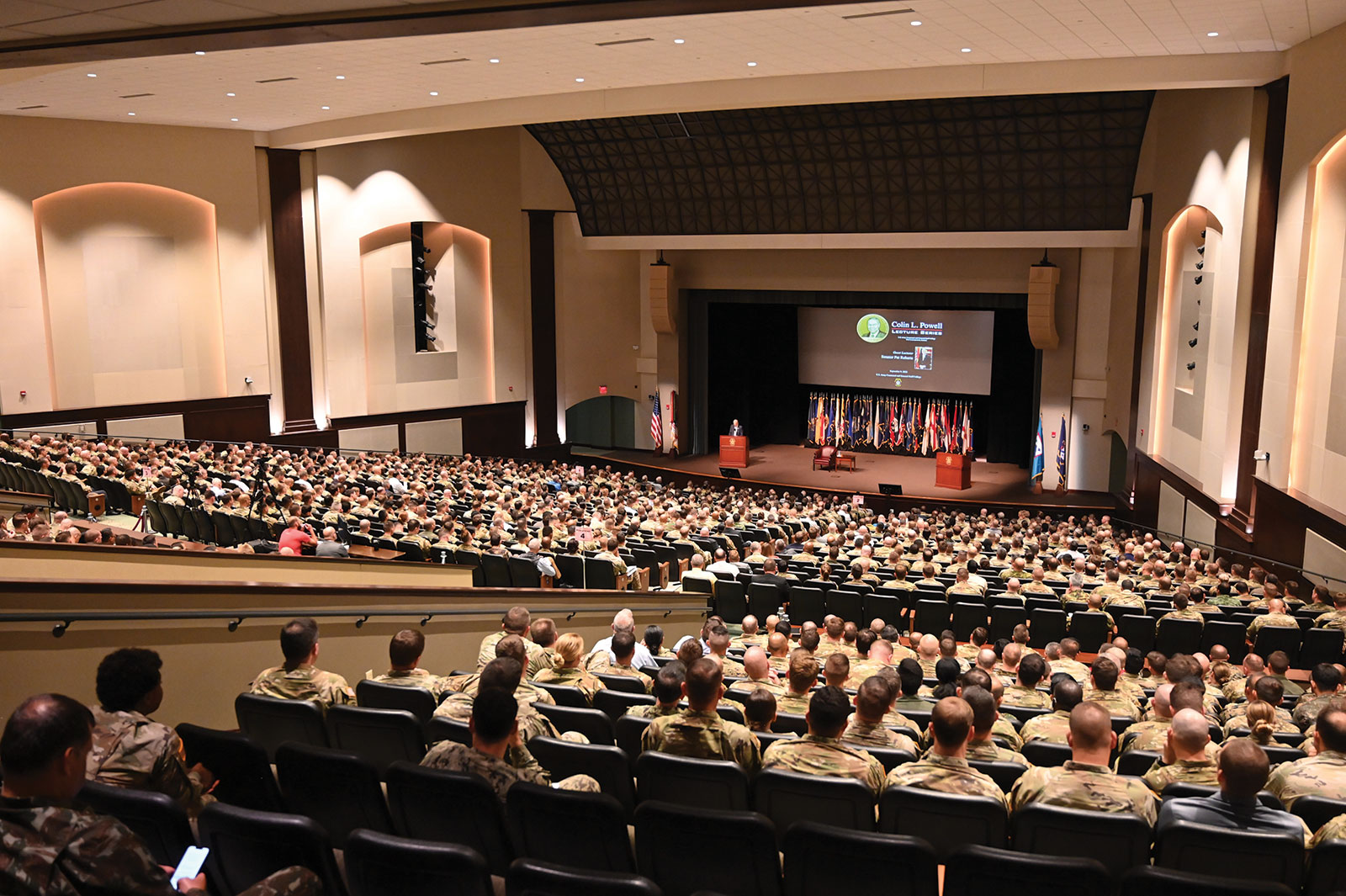 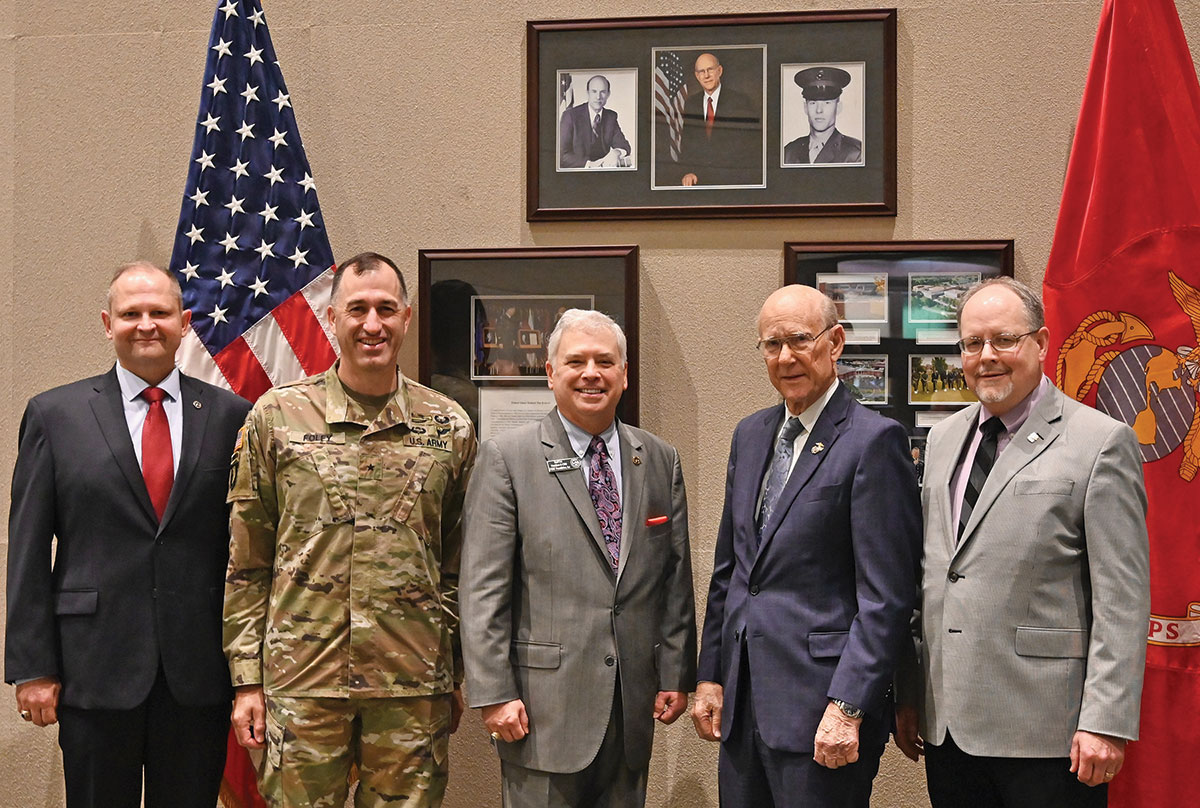 From left, CGSC Foundation Chair Brig. Gen. (Ret.) Bryan W. Wampler, CGSC Deputy Commandant Brig. Gen. David Foley, CGSC Foundation President/CEO Col. (Ret.) Roderick M. Cox, Sen. Pat Roberts and CGSC Dean of Academics Dr. Jack D. Kem, pose for a group photo in front of the Senator Roberts display in the “Roberts Room,” before the start of the Class of 2023 Powell Lecture on Sept. 9, 2022. The Roberts Room, the premier conference room in the Lewis and Clark Center, was named in honor of Sen. Roberts for his perseverance in getting legislation passed to build the Lewis and Clark Center in 2007.

From left, Sen. Roberts’ former chief of staff, attorney Chad Tenpenny, Sen. Pat Roberts and his wife Franki pose in front of the display in the “Roberts Room” of the Lewis and Clark Center.

After the meeting Roberts was escorted across the atrium to Eisenhower Hall where he delivered his remarks to students in CGSC’s Command and General Staff School. After his remarks and a question and answer period, he proceeded to the Marshall Auditorium where he spoke with students in the School for Advanced Military Studies. During both sessions he spoke of how CGSC was charged with learning and engaging in critical thought, adding that “it is sorely needed given the tough times we’re in”…and when this current class achieves proficiency in critical thought he suggested that “we bottle it and send it to the White House and Congress.”

Roberts told stories of his various experiences while serving as a U.S. representative and senator, weaving in the history of his own, as well as his family’s military service. He spoke about the effort he made to get the funds to build new facilities for CGSC after visiting Bell Hall, CGSC’s old home built in 1958, and seeing the state of disrepair it was in after so many years in service. Roberts also spoke about the challenges the military now faces in the current operating environment – how Russia’s invasion of Ukraine would serve to influence the remainder of the students’ careers in the military; how China’s rising influence and aggressive actions put our nations on a path of potential confrontation; how our chaotic withdrawal from Afghanistan undermined our nation’s credibility and leadership in that part of the world; the impact of the COVID pandemic; the nation’s recent economic struggles; readiness challenges and recruiting shortfalls the military faces; and social issues that divide the nation.

Sen. Pat Roberts delivers his remarks during the annual Colin L. Powell Lecture for students of the Command and General Staff Officers Course Class of 2023 in Eisenhower Hall in Fort Leavenworth’s Lewis and Clark Center Sept. 9, 2022.

“We need warfighters now more than ever,” Roberts said to the students. “We need to have you focus on your teams and make your piece of the Army the best it can be…If what you are being asked to do doesn’t fit our effectiveness, our readiness, or worse, lessens it, it is your obligation to ask why. You must be willing to speak truth to power. Your number one priority is to make sure our national security remains intact so that we can continue to defend our individual freedoms and liberties. Be proud, there is no higher calling today.”

At the conclusion of his remarks, Cox and Foley joined Roberts on stage and presented him with a commemorative Colin L. Powell coin in appreciation for his service as the lecturer for the Class of 2023.

After his time with the students in the morning, the CGSC Foundation hosted a sponsored luncheon for Roberts and other guests at the Frontier Conference Center on Fort Leavenworth. Cox introduced Roberts who spoke to the attendees about his time with the students and his gratitude for the opportunity to serve as the annual Powell lecturer. At the conclusion of his remarks, Wampler and Cox presented Roberts with a three-coin set of the 2013 5-Star Generals Commemorative Coins in a U.S. Mint presentation case. Ethics rules prevented the Foundation from presenting Roberts with this gift while he was still serving as a senator.

“We presented Sen. Roberts with this gift at the luncheon to commemorate and thank him for his efforts in getting the 5-Star Generals Commemorative Coin Act through the legislative process,” said Cox. “That legislation and the sales of the coins in 2013 generated a tremendous amount of awareness and funds for our Foundation.” 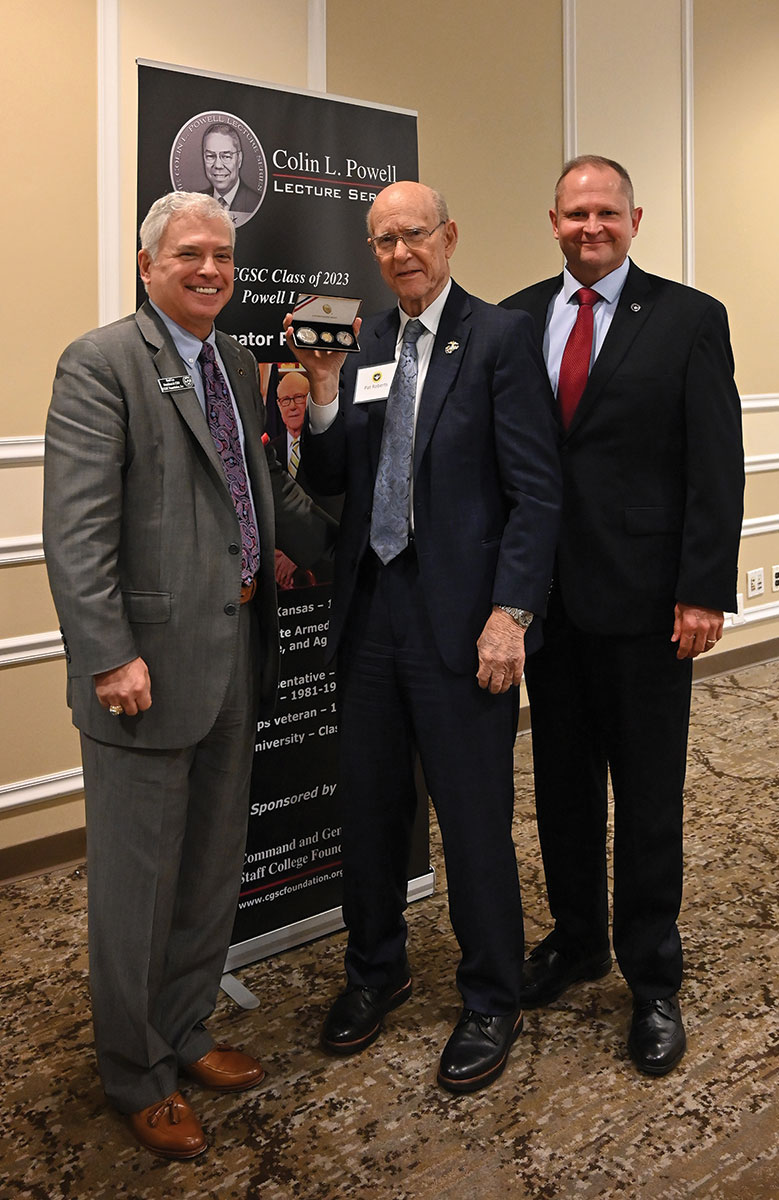 Brig. Gen. (Ret.) Bryan W. Wampler, right, and CGSC Foundation President/CEO Col. (Ret.) Roderick M. Cox, left, present Sen. Pat Roberts with a set of the 5-Star Generals Commemorative Coins in a U.S. Mint presentation case in appreciation for his leadership in getting the 5-Star Generals Commemorative Coin Act signed into law in October 2010. Wampler and Cox presented the gift during the sponsored luncheon at the Frontier Conference Center after the Powell lecture on Sept. 9, 2022.

Roberts served as the U.S. Senator from Kansas from January 1997 to January 2021. Prior to that he was the U.S. Representative for the 1st Congressional District of Kansas from 1981-1997. During his political career he served on the Senate Armed Services, Ethics, Intelligence, and Agricultural committees. He is first person to ever chair both the House and the Senate agricultural committees.

Roberts, 86, was born in Topeka, Kansas in 1936, graduated high school in 1954, and went on to graduate from Kansas State University in 1958 with a journalism degree. After college, he followed family tradition and entered the U.S. Marine Corps serving from 1958-1962, achieving the rank of first lieutenant. After his military service he worked as a newspaper journalist in Arizona until 1967, when he joined the staff of Kansas U.S. Sen. Frank Carlson. In 1969, he became an administrative assistant to Kansas U.S. Rep. Keith Sebelius. In 1969 he married his wife, Franki, and they went on to have three children. When Sebelius announced his retirement in 1980, Roberts ran for his seat and won.

Among many other accomplishments, Sen. Roberts has made significant contributions to the Fort Leavenworth community. He introduced legislation that resulted in the funds necessary to build the Lewis and Clark Center that was completed in 2007. In that light, the “Roberts Room,” one of the premier conference rooms in the Lewis and Clark Center, was named in his honor. Roberts was also the lead sponsor for the 5-Star Generals Commemorative Coin Act that was signed into law in October 2010. The CGSC Foundation championed this bill to recognize and celebrate the U.S. Army’s five 5-Star generals attendance and graduation from the Command and General Staff College. Once approved, the bill authorized the minting of official U.S. currency – coins bearing the likeness of Generals of the Army MacArthur, Marshall, Eisenhower, Bradley and Arnold, as well as the official crest and Lamp imagery of the Command and General Staff College. Funds raised as a result of the sales of those coins in 2013 greatly benefited the CGSC Foundation.

The Colin L. Powell Lecture Series was established in 2008 to honor the legacy of General Colin L. Powell at Fort Leavenworth. The Powell Lecture Series provides a forum for the discussion of national security issues by prominent national leaders for the benefit of the students and faculty of the Command and General Staff College and the Fort Leavenworth community. The CGSC Foundation sponsors the series. Gen. Powell was the first lecturer in 2008.

Watch the full video of Sen. Roberts remarks on the CGSC Facebook page 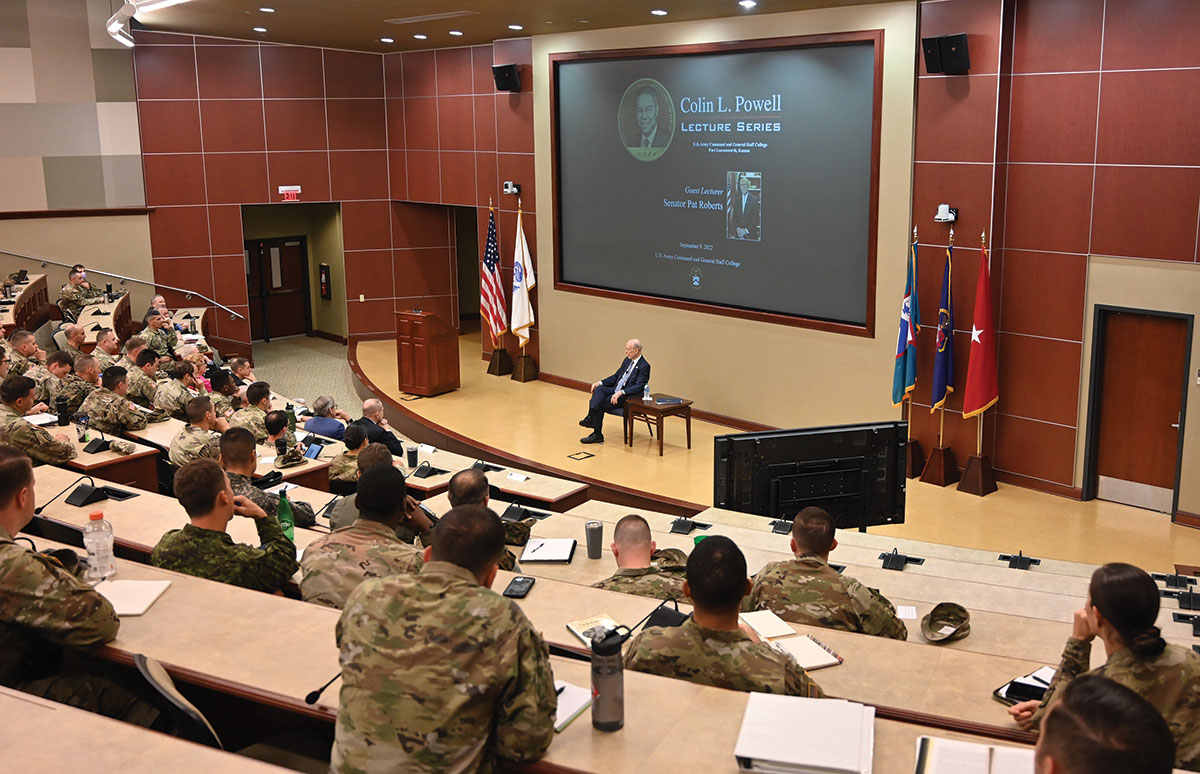 Sen. Pat Roberts speaks with students in the SAMS Class of 2023 in Marshall Auditorium of the Lewis and Clark Center on Sept. 9, 2022.