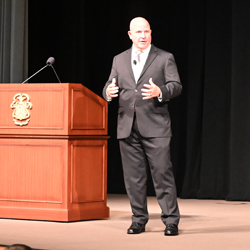 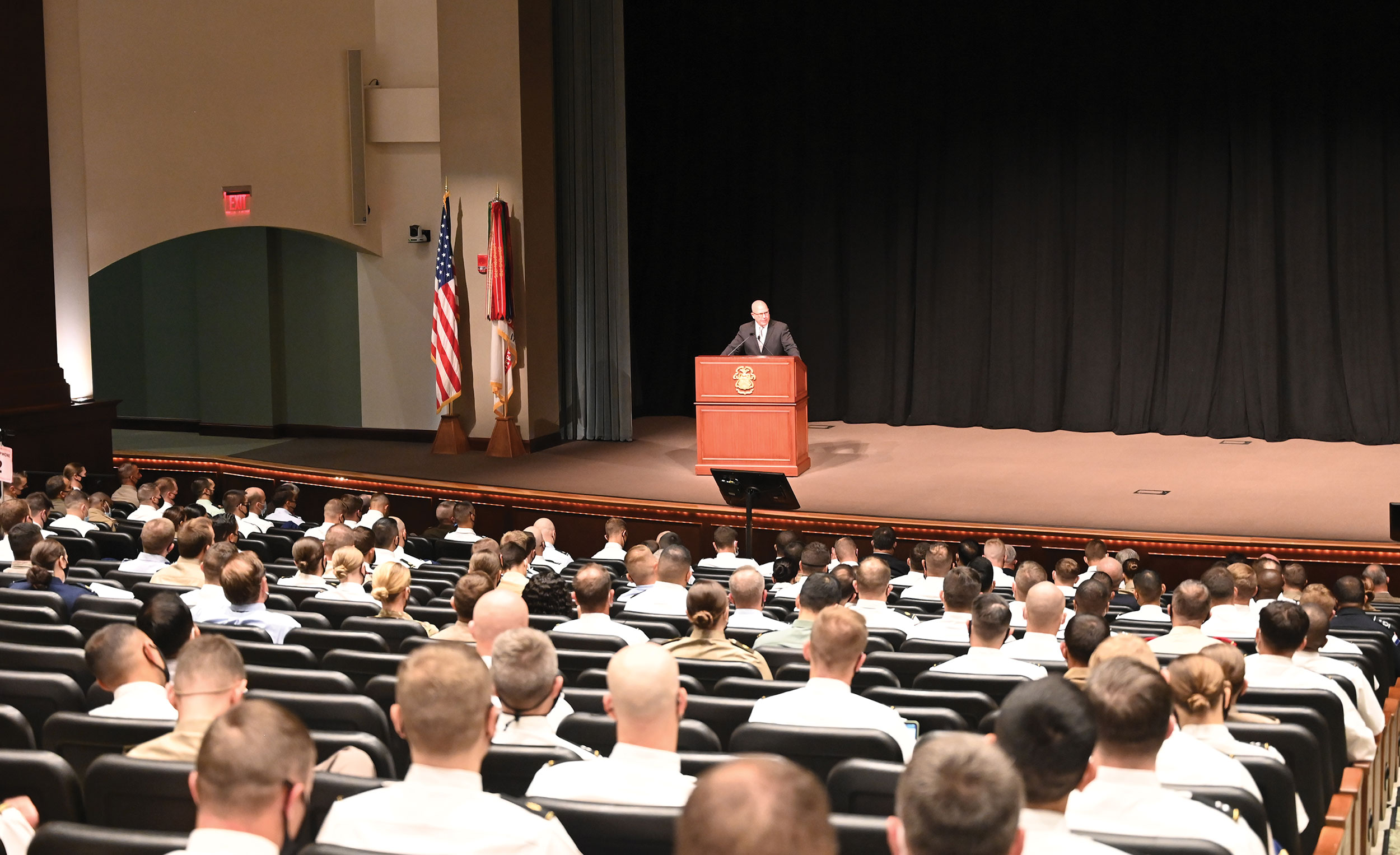 Lt. Gen. (Ret.) H.R. McMaster, the 26th assistant to the President for National Security Affairs, delivers his remarks during the annual Colin L. Powell Lecture for students of the Command and General Staff Officers Course Class of 2022 in Eisenhower Hall in Fort Leavenworth’s Lewis and Clark Center Sept. 8, 2021.

Lieutenant General H.R. McMaster, who served as the 26th assistant to the President for National Security Affairs, presented the annual Colin L. Powell Lecture for students of the Class of 2022 at the U.S. Army Command and General Staff College Sept. 8, 2021, at Fort Leavenworth’s Lewis and Clark Center. 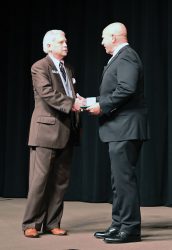 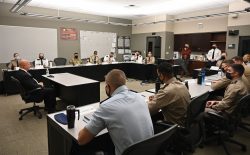 After the lecture in Eisenhower Hall, Lt. Gen. (Ret.) H.R. McMaster visits with CGSOC students in a classroom for a more in-depth conversation about strategy and national security.

McMaster began the morning speaking to the Command and General Staff Officers Course (CGSOC) class gathered in the Eisenhower Auditorium of the Lewis and Clark Center. After his remarks and a Q&A session, he visited one of the CGSOC classrooms for a more in-depth check-in with those students to continue the conversation about national security issues and strategic planning. After the classroom visit, McMaster also spoke with the 2022 class of the School of Advanced Military Studies in Marshall Auditorium of the Lewis and Clark Center.

McMaster’s remarks and discussions with the students were not “for attribution,” which enabled him and the students to discuss issues freely without reservations. His presentations at each stop of the morning were met with enthusiastic, but tough questions from the students.

“We couldn’t be happier with the general’s level of engagement during his time with us,” said CGSC Foundation President/CEO Roderick M. Cox. “He has a way of communicating that connects with his audiences and we all learned something from him during his presentations.”

Lt. Gen. H.R. McMaster, U.S. Army, Ret., served as a commissioned officer in the U.S. Army for 34 years after graduation from West Point in 1984. He earned a doctorate in military history from the University of North Carolina at Chapel Hill and is the author of Battlegrounds: The Fight to Defend the Free World.

During his military career McMaster served as deputy commanding general of the U.S. Army Training and Doctrine Command; commanding general of the Maneuver Center of Excellence and Fort Benning; and commander of the Third Armored Cavalry Regiment. He was a company commander in Operation Desert Storm in 1991, earning the Silver Star for his actions there. After Desert Storm he served as a history professor at West Point from 1994-1996. He graduated from the U.S. Army Command and General Staff College in 1999, after which he commanded 1st Squadron, 4th Cavalry Regiment from 1999-2002, then later, commanded the 3rd Armored Cavalry Regiment from 2004-2006, deploying to Iraq with the regiment.

Sponsored by the CGSC Foundation, the intent of the Colin L. Powell Lecture Series is to invite national and international distinguished personalities to provide lectures on contemporary issues to the faculty, student body, community and business leaders at the Command and General Staff College. Lecturers in the series range from heads of state, heads of government, senior diplomats, and other distinguished persons who could bring their unique perspectives to help educate the audience about historical or contemporary issues of importance to the nation or the international community. 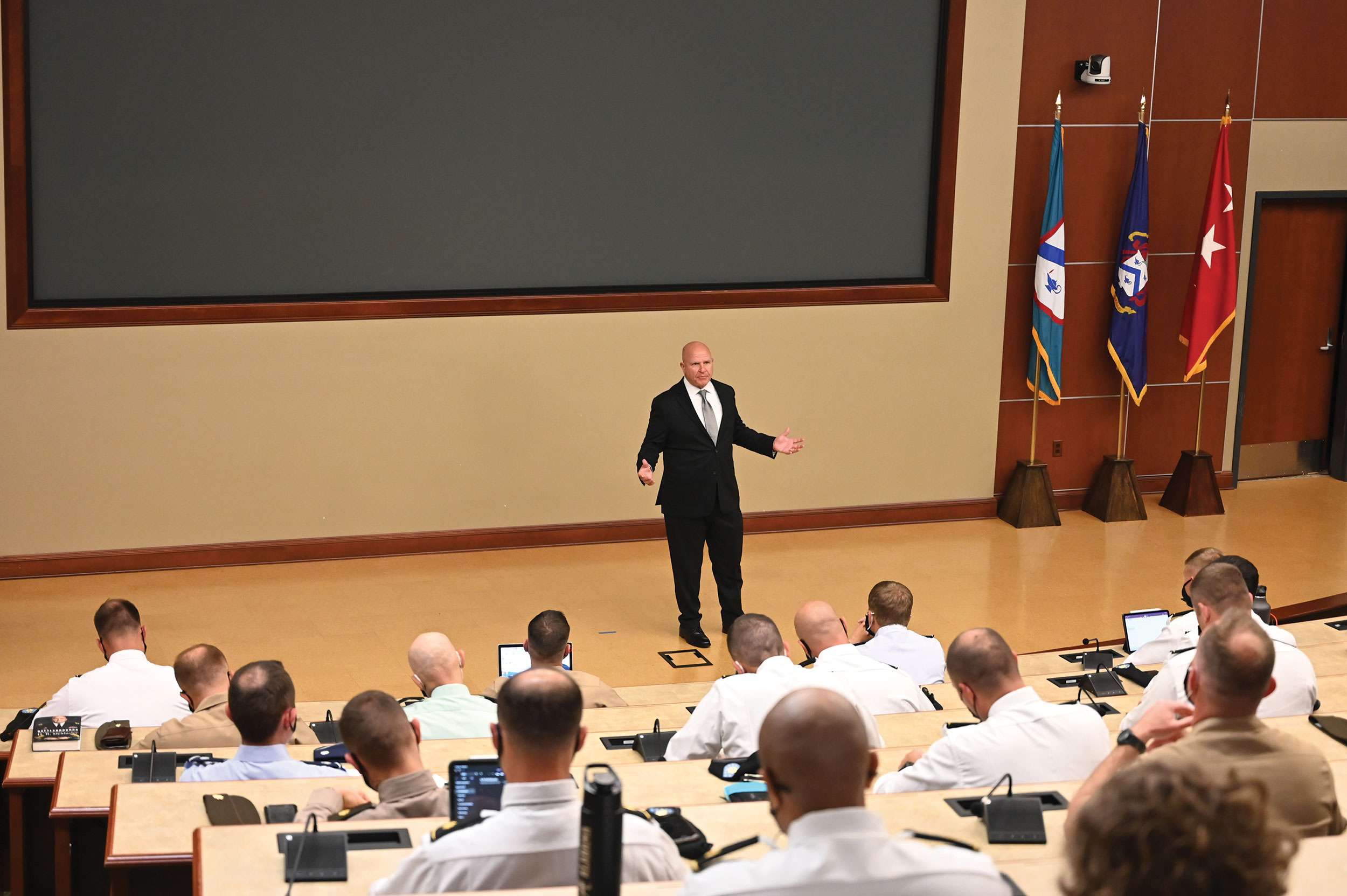 In his last stop during his visit to CGSC as the AY22 Colin L. Powell Lecture Series lecturer, Lt. Gen. (Ret.) H.R. McMaster speaks with students in the SAMS Class of 2022 in Marshall Auditorium of the Lewis and Clark Center on Sept. 8, 2021.