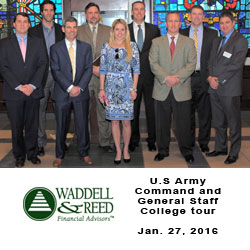 Foundation CEO Doug Tystad led the group of nine around the Lewis and Clark Center, home of CGSC, and spoke to them about the history of the College, its programs and notable U.S. and international alumni.

The group had the opportunity to participate in a computer simulation exercise led by Dr. Jim Sterret, visited a classroom where students were conducting a planning exercise, and went on a driving tour of Fort Leavenworth. They also received an informational briefing from CGSC Chief of Staff Jeff LaMoe.

For more photos of the visit click the gallery below.