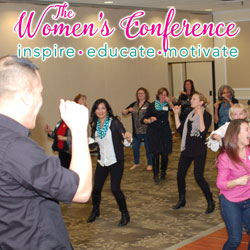 Participants could sign up for one or both days of the conference. The first night, participants attended a painting class and a class on entertaining in the home. After these two classes participants were treated with a “surprise activity” that had all the attendees literally dancing. – Better Opportunities for Single Soldiers (BOSS) President Spc. Justin Mabolo, Medical Department Activity, along with Marine Sgt. Archie Echevarria, Marine Detachment, and Spc. Benjamin Watts from MEDDAC, led the participants in hip hop dance lessons.

Courtney Smith, administrative assistant at Northrop Grumman, attended the Women and Money class led by Bonnie Humphrey and Carrie Clark with the American Armed Forces Mutual Aid Association. The class highlighted how to create a financial plan, choosing an adviser, how to allocate assets, retirement, and how to implement a financial plan. 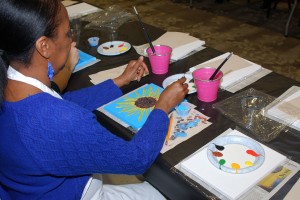 Col. Norma Bradford works on her painting during the painting class taught by Jackie Basilotta from “Bisque-It” during the 2016 Women’s Conference.

“I think it’s really important for women of all ages to be financially responsible and to learn what our options are,” Smith said. “Investing is an important thing.”

Army spouse Cassandra Beldowicz said the conference provided her the opportunity to meet new people and come away with some more knowledge about how to be more successful in her life.

“The women’s conference had some great topics that were being offered that I wanted to learn more about,” Beldowicz said. This (Women and Money class) was actually one of the main ones. My husband and I talk about financial planning for our future, but I don’t always know exactly what he’s talking about.” 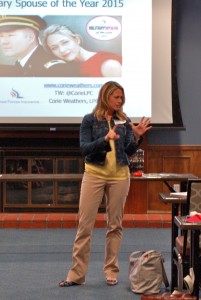 Corie Weathers, 2015 Armed Forces Insurance Military Spouse of the Year, provides the keynote remarks to attendees at the closing of the 2016 Women’s Conference hosted by the CGSC Foundation.

The conference closed with remarks from Corie Weathers, 2015 Armed Forces Insurance Military Spouse of the Year. Weathers is a licensed professional counselor who has worked with military families struggling with the effects of war. In 2009, she served as careteam coordinator for the 3rd Squadron, 61st Cavalry Regiment, 4th Brigade Combat Team, 4th Infantry Division, at Fort Carson, Colo. Her husband, Matthew Weathers, served as the brigade chaplain. Twelve soldiers died in that one deployment and Corie helped surviving family members with the grieving process. She was nominated by her husband for the spouse of the year award.

During the Women’s Conference, she spoke about her experiences as AFI’s MSOY and marriage. She also spoke about a trip to Turkey, Iraq and Afghanistan that she went on in Demeber 2015 as an invited guest of the Office of the Secretary of Defense. It was a first-ever experience of sending a military spouse overseas to see what deployment is like.

At first, Weathers said she had reservations, but decided it was an opportunity to help others.

At the conclusion of her remarks, Weathers said she hoped her message and the message of unity at the conference resonated with the women attending.

Karen Harris, a contractor with Northrop Grumman, attended both days of the conference and was very impressed with her experience.

“There was quite a variety of topics covered, some with lighter content than others, but all touched pieces and  parts of a military spouse’s life/lifestyle,” Harris said. “The last two sessions, the one that Kay Barnes, the former mayor of Kansas City, Missouri, presented and the session featuring Corie Weathers, the 2015 Military Spouse of the Year, were the ones that touched me most.”

Foundation Chairman Lt. Gen. (Ret.) John Miller heard some early reports about the Women’s Conference and offered his thanks to Foundation Director of Operations Ann Soby, who planned and led the conference, and Foundation CEO Doug Tystad.

“You are changing hearts and lives,” Miller said, “and giving courage to women who carry tremendous responsibilities for their families, their soldier, our Army and our Nation. Thank You!”

See the original story on the Fort Leavenworth Lamp website.

Visit the Photo Gallery to see all the
photos from the 2016 Women’s Conference.

The Foundation extends special thanks to all the sponsors,
presenters and volunteers who made this conference a success:

A special thanks goes to Corie Weathers who so admirably shares her insights of being part of the Army family and big supporter of her Soldier.

Thanks to our local businesses who generously donated door prizes:

Thanks to those special persons who supported the Conference:

And thanks again to all the sponsors: 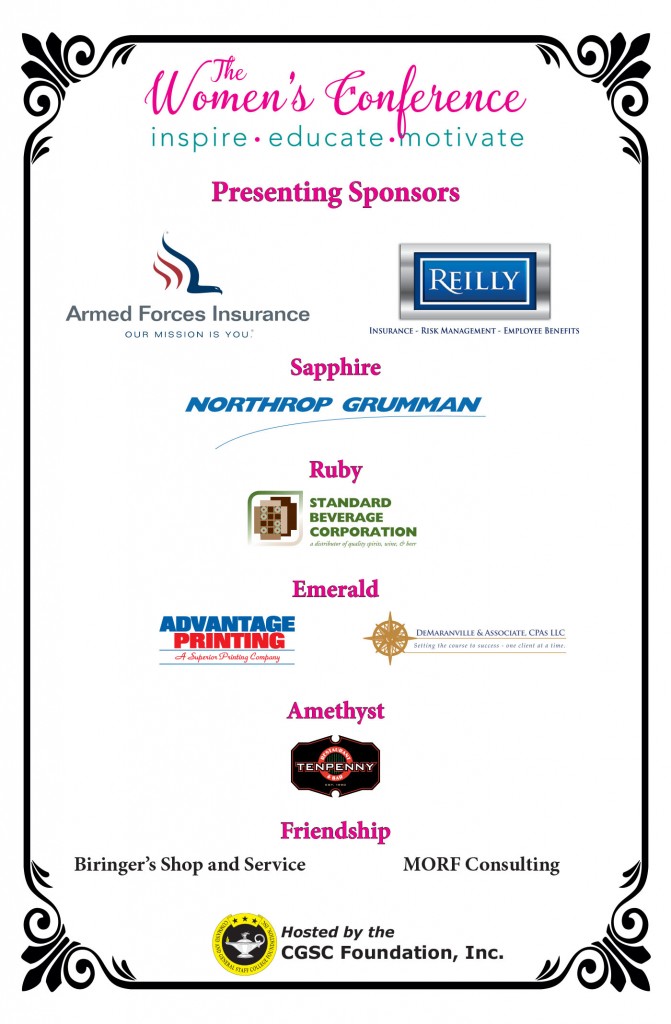