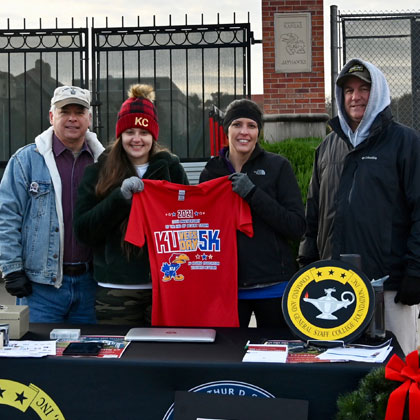 This year’s race was in commemoration of the 30th anniversary of the end of Desert Storm and boasted nearly 600 participants, some of whom participated virtually, comprised of veterans from all around the region, KU students and KU ROTC students, family members and running enthusiasts in general.

The race festivities opened with the National Anthem and the playing of “Taps” to honor and remember all veterans past and present and their service and sacrifice for the nation. The race kicked off shortly thereafter at the sound of an air horn at 9 a.m. sharp. Enthusiastic runners yelled, laughed and jumped as they crossed the starting line, but faces turned serious quickly as the first hill in what was reportedly a very hilly five-kilometer track, loomed within the first half-kilometer.

Part of the Foundation’s sponsorship included setting up a table at the start/finish line. Foundation President/CEO Rod Cox assisted by daughter Paige Cox focused the Foundation’s presence at the race on raising race attendees’ awareness about Wreaths Across America and how to honor fallen veterans during the coming holiday season.

Helping round out the Foundation’s presence at the race was Army University Chief of Staff Greg Williams and his wife Gail, and Combined Arms Center Personnel Officer (G-1), Col. Mark Morgan, spouse of the Foundation’s director of operations.