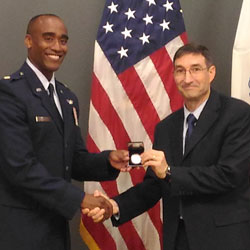 U.S. Air Force Major Bishane A. Whitmore graduated from the Command and General Staff Officers Course of the U.S. Army Command and General Staff College on June 10, as one of 1,300 students. He was also one of only 139 members of the class recognized for obtaining a Masters of Military Art and Science (MMAS). In addition to those accomplishments, Whitmore was presented with the Lieutenant Colonel Boyd McCanna “Mac” Harris Leadership Award for his class. The award is presented to a student in the class who excels academically and demonstrates superior leadership. But what was most unique was that Whitmore, the grandson of an Ethiopian Army General, heard his 96-year-old grandfather’s name announced as an honored guest at the beginning of the graduation ceremonies. 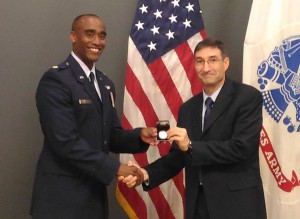 Dr. Ted Thomas, director of CGSC’s Department of Command and Leadership, presents U.S. Air Force Maj. Bishane A. Whitmore with a General of the Army Commemorative U. S. Silver Dollar, the individual award that is part of Whitmore’s earning the Lieutenant Colonel Boyd McCanna “Mac” Harris Leadership Award for the CGSOC Class of 2016.

In an interview with Tadias Magazine, Whitmore said, “The school was gracious enough to recognize him during the opening remarks and as a grandson, there is nothing better than offering your grandfather the moment of respect and dignity he deserves.”

Whitmore’s grandfather is retired Ethiopian General Tilahun Bishane, graduate of the CGSC Class of 1969. He and other family members attended the Class of 2016 graduation on June 10 to see Maj. Whitmore receive his diploma and his leadership award. Gen. Bishane is a veteran of the Italian-Ethiopian war and later served as the director of Ethiopia’s Army Medical Center. After he retired from active service in 1976, he spent the next four-plus decades of his life as an Ethiopian Red Cross volunteer.

“Attending CGSC was my way of saluting him and his legacy of excellence,” Whitmore told Tadias Magazine.

Whitmore’s Art of War Scholars leadership instructors nominated him for the Mac Harris leadership award. By anyone’s estimation, the recommendation reads as if Whitmore had more hours in his day than any one human.

In the narrative award recommendation, the author noted that Whitmore was a section leader for two student sections; a student section athletic director; led the planning and organization volunteer groups for both the Eagle-Owl and the Iron Major competitions; maintained over a 4.0 grade average; helped to revise and rewrite some course lessons in unmanned aircraft systems electives; taught three joint firepower electives; wrote and submitted essays for three writing awards as well as a book review for the Army’s Military Review magazine; and achieved a perfect score in his physical fitness test, setting a new class record for the Air Force’s 1.5 mile run in the process (he also voluntarily participated in his fellow Army students’ physical fitness test as a way to help encourage them). If all that weren’t enough, he also volunteered to serve on the annual Air Force Ball committee, taking charge of the audio-visuals and writing the ceremony script; he created a video to honor a retiring Air Force member’s career; volunteered his time with the University of Kansas Air Force ROTC career day; served as a volunteer for three orienteering events on Fort Leavenworth and two running events in Kansas City; volunteered some hours to the Kansas City Rescue Mission helping middle schoolers in a neighborhood cleanup effort; donated more of his time to help the Frontier Army Museum on Fort Leavenworth revamp their armory displays; AND…he also logged 14 hours of volunteer time to the Liberty, Mo., “Meals on Wheels” program to deliver meals to elderly members of the local community. 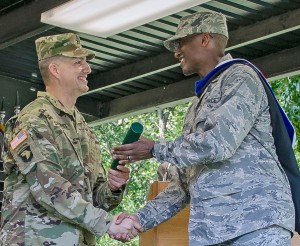 Maj. Whitmore receives his MMAS from Col. Douglas Cardinale, Director of the Command and General Staff School, during the CGSOC Class of 2016 graduation on June 10.

The Lieutenant Colonel Boyd McCanna “Mac” Harris Leadership Award is given to the individual possessing the innate leadership and communications skills embodied in the Army Leadership concept of Be-Know-Do, a concept developed by Lt. Col. Harris when he was a CGSC instructor and doctrine writer with the Center for Army Leadership. His concept was contained in the 1983 version of FM 22-100, Army Leadership.

Lt. Col. Harris was a two-tour Vietnam veteran and was inducted into the Fort Leavenworth Hall of Fame earlier this year. The leadership award in his name is sponsored by Moira and Gary Sinise with a permanent endowment through the CGSC Foundation. Moira Sinise is Lt. Col. Harris’ sister. The endowment provides a memorial plaque in the Command and Leadership Department office as well as an individual award of a 2013 General of the Army Commemorative U. S. Silver Dollar in a presentation box along with a framed certificate. The awardee’s name is displayed on the permanent plaque in the basement of Lewis and Clark Center.

The CGSC Foundation wholeheartedly supports CGSC’s Department of Command and Leadership selection of Maj. Whitmore for this award and we wish him well in his future assignments.

Editor’s Note: This article previously referred to Maj. Whitmore as a “first generation American.”– That was incorrect. His mother is Ethiopian and his father is from New York. We apologize for the inaccuracy.