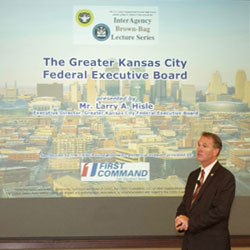 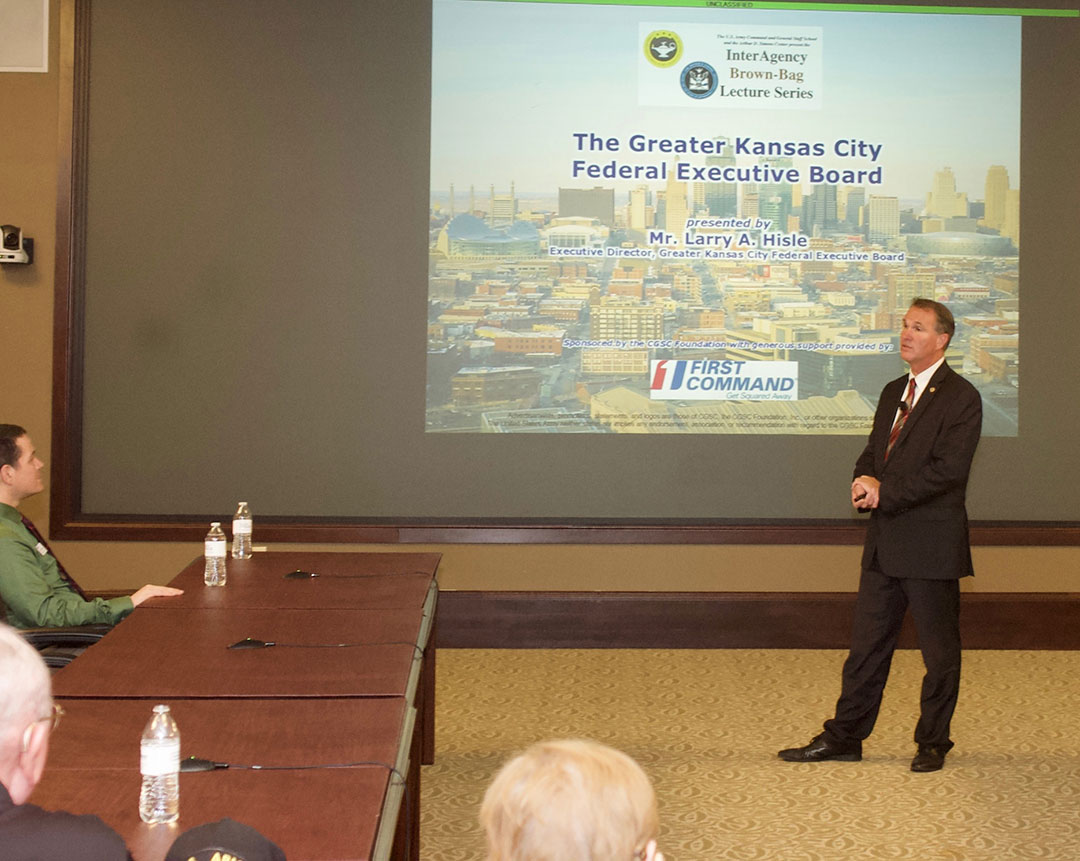 On May 8, in the Arnold Conference Room of the Lewis and Clark Center at Fort Leavenworth, Mr. Larry A. Hisle, executive director of the Greater Kansas City Federal Executive Board, led a discussion on the roles and missions of the Federal Executive Board and how it serves as a catalyst for communication, coordination and collaboration among the various federal agencies with offices in the Kansas City metropolitan area.

During his presentation, Hisle walked the audience of students and other attendees from Fort Leavenworth organizations through the Kansas City FEB’s “lines of business” explaining how the FEB in KC focuses on increasing the effectiveness and coordination of and between federal agencies in the area. In the first line of business, “Emergency Preparedness, Employee Safety and Security,” he discussed how the FEB operates its notification and advisory plans during emergencies and how the FEB conducts liaison between agencies on emergency preparedness issues.

The second line of business Hisle discussed was the FEB’s “Workforce Development and Support” programs, which drew a great deal of interest in the audience. The KC FEB coordinates and conducts several education and training programs throughout the year, which can help save costs of each individual agency conducting their own proprietary training. Among other programs, Hisle said his office has worked with the Army Management Staff College at Fort Leavenworth, as well as the University of Kansas, to offer various programs for leader training and development.

The last line of business, “Intergovernmental and Interagency Collaboration and Community Outreach,” Hisle discussed is focused on maintaining and improving strategic partnerships. He said in this arena the FEB works to communicate information to the federal workforce about local, as well as federal programs such as the annual Combined Federal Campaign, local outreach to military veterans, and committees such as the Small and Minority Business Committee. He also mentioned that the KC FEB maintains membership in community and professional organizations such as the KC Chamber of Commerce to serve as a Federal government liaison and increase communication and collaboration.

Hisle has served as the executive director of the Greater Kansas City Federal Executive Board since 2013. He has a bachelor’s degree in Business Administration from Thomas Edison State University. He previously served as a program manager in the U.S. Office of Personnel Management. Hisle is very active in the community volunteering with youth sports teams and scouting activities as well as serving on the board of directors of the Sherwood Center for the Exceptional Child and on the advisory council of the KCK Area Technical School.

For more information about the Kansas City Federal Executive Board visit www.kansascity.feb.gov.