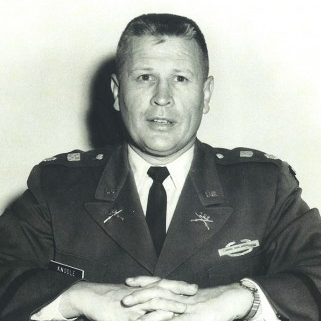 This week the CGSC Foundation was saddened to hear the news that Lt. Col. Faye Knodle died June 20 in Marietta, Ga., at the age of 94. The Foundation was privileged to meet Knodle and host his visit to Fort Leavenworth and the Command and General Staff College in December 2014. (see story here…and more photos from the visit and his career in the Foundation News)

Knodle was a veteran of World War II, serving in the 67th Armored Infantry Battalion, crossing Omaha Beach on the fourth day after D-Day. He received his battlefield commission as an infantry lieutenant from Gen. George Patton. He retired from the Army as a lieutenant colonel from the Illinois National Guard and went on to a successful career in business. Read his full obituary here.

A graveside service is planned for a later date at Arlington National Cemetery. The CGSC and CGSC Foundation family offer sincere condolences to the family of this fine Soldier.