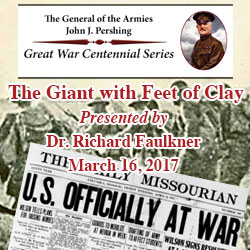 The Department of Military History of the U.S. Army Command and General Staff College and the CGSC Foundation at Fort Leavenworth invite the public to attend the tenth in a series of lectures intended to educate the public about World War I during its 100-year commemoration. – Dr. Richard Faulkner, a professor of history at CGSC, will present “The Giant with Feet of Clay” in the Arnold Conference Room of the Lewis and Clark Center on Fort Leavenworth, March 16, at 6 p.m. Attendees are also invited to the reception that begins at 5:30 p.m. 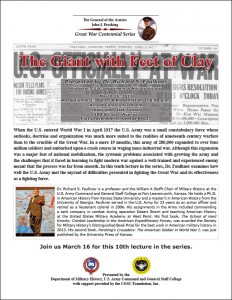 When the U.S. entered World War I in April 1917 the U.S. Army was a small constabulary force whose outlooks, doctrine and organization was much more suited to the realities of nineteenth century warfare than to the crucible of the Great War. In a mere 19 months, this army of 280,000 expanded to over four million soldiers and embarked upon a crash course in waging mass industrial war. Although this expansion was a major feat of national mobilization, the systemic problems associated with growing the army and the challenges that it faced in learning to fight modern war against a well-trained and experienced enemy meant that the process was far from smooth. In this tenth lecture in the series, Dr. Faulkner will examine how well the U.S. Army met the myriad of difficulties presented in fighting the Great War and its effectiveness as a fighting force.

Dr. Richard S. Faulkner is a professor and the William A Stofft Chair of Military History at the U.S. Army Command and General Staff College at Fort Leavenworth, Kansas. He holds a Ph.D. in American History from Kansas State University and a master’s in American History from the University of Georgia. Faulkner served in the U.S. Army for 23 years as an armor officer and retired as a lieutenant colonel in 2006. His assignments in the Army included commanding a tank company in combat during operation Desert Storm and teaching American History at the United States Military Academy at West Point. His first book, The School of Hard Knocks: Combat Leadership in the American Expeditionary Forces, was awarded the Society for Military History’s Distinguished Book Prize for the best work in American military history in 2013. His second book, Pershing’s Crusaders: The American Soldier in World War I, was just published by the University Press of Kansas.

The CGSC Department of Military History hosts the General of the Armies John J. Pershing Great War Centennial Series with support from the CGSC Foundation. The lecture series intended to foster understanding of this world-changing conflict during its 100-year commemoration. More than any other single event, World War I was the decisive, shaping experience of the Twentieth Century. It was a brutal war that brought down four empires, led to revolution in Russia, and eventually brought the United States onto the world stage as a major power. We live with its results to this day. All lectures in the series are free and open to the public. Members of the public coming to the lectures from off-post will need to add extra time to check-in at the Fort Leavenworth visitor center. – For visitor information, see http://garrison.leavenworth.army.mil/index.php/myfort/services/services/gate-information.

For more information on this or other lectures in the series contact Dr. Shawn Faulkner, CGSC Department of Military History: email– richard.s.faulkner.civ@mail.mil or phone– 913-684-2056.