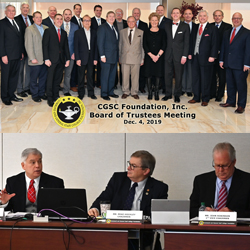 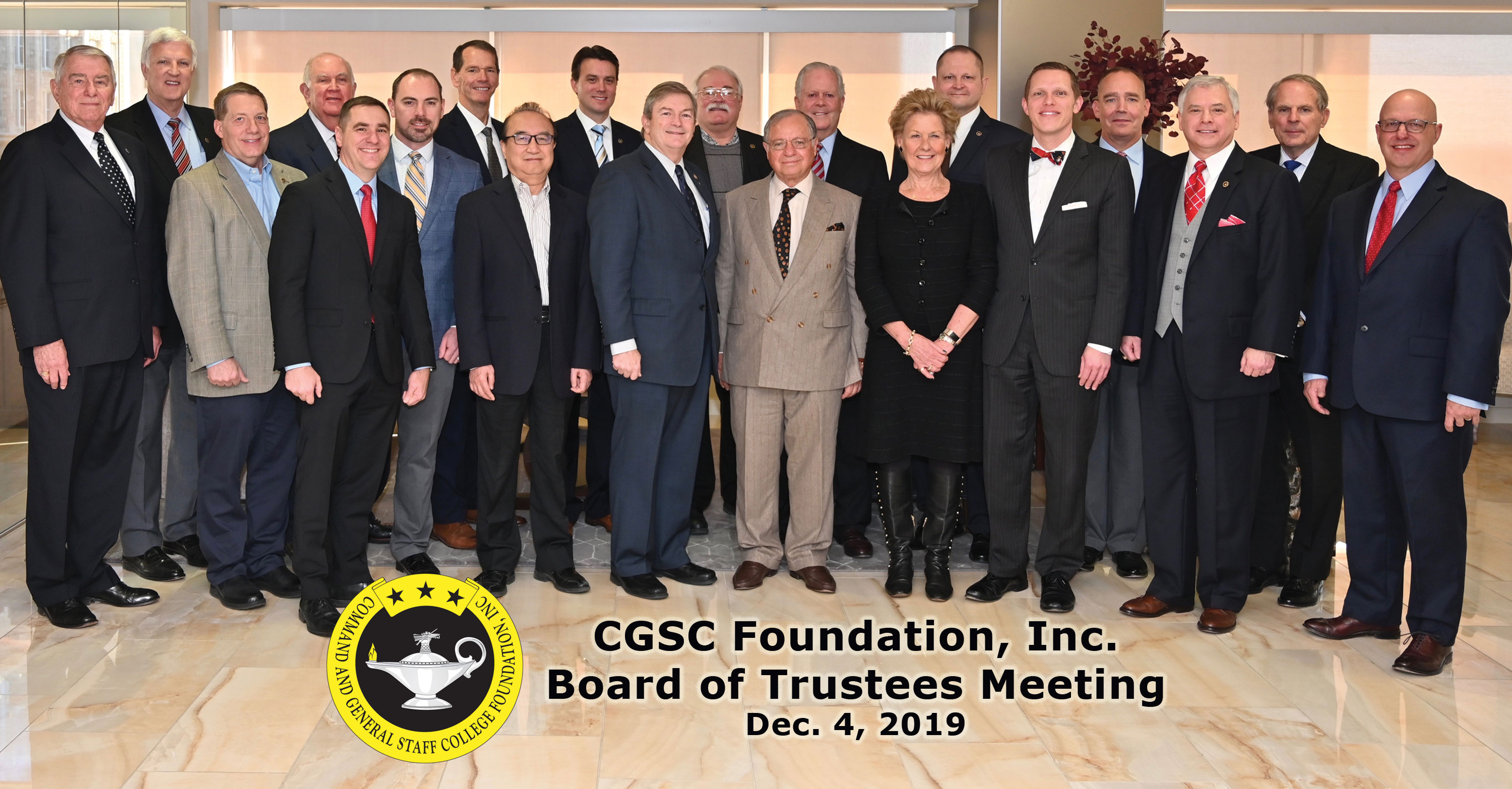 The CGSC Foundation conducted its fourth quarter board of trustees meeting on Dec. 4, 2019, at the offices of Spencer Fane in downtown Kansas City.

Highlights from the meeting include board member approval of a strategic plan outlining the major goals for the Foundation over the next four years. Trustees also approved a budget for 2020. Foundation Chief Development Officer Bob Ulin also led a training segment for trustees entitled “Philanthropy in America” to develop the trustees understanding of the landscape of nonprofit fundraising in the nation. 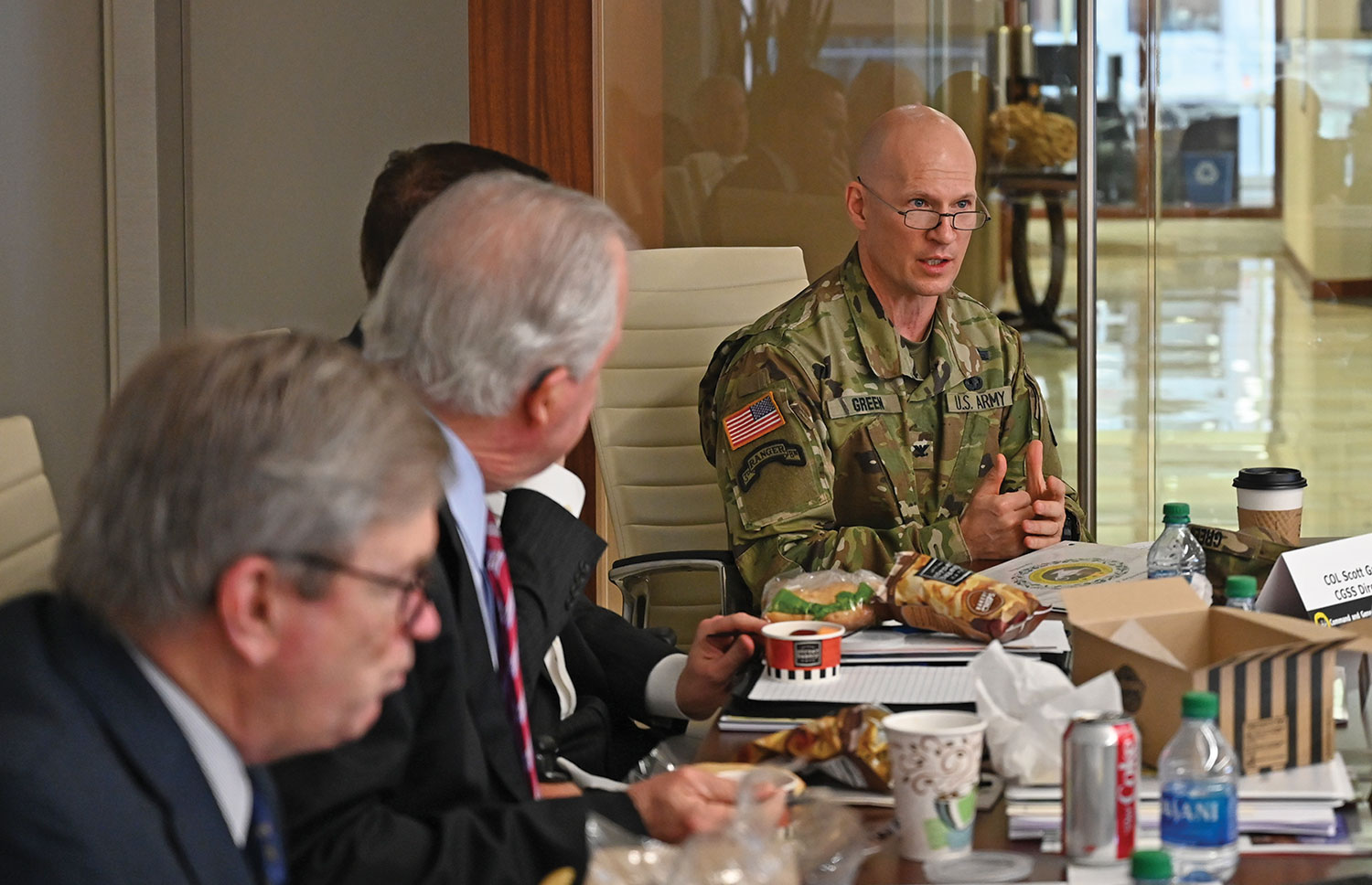 Col. Scott Green, director of the Command and General Staff School, provides Foundation trustees with an overview briefing on the College during the board meeting Dec. 4, 2019. (photos by Mark H. Wiggins)

Col. Scott Green, director of the Command and General Staff School, led the lunch presentation for the trustees with an overview of CGSS mission, faculty and student demographics, and the specifics of the current curriculum.

Ambassador Canavan visits with the members of the CGSC Foundation board of trustees during their quarterly meeting Dec. 4, 2019.

In early afternoon, the CGSC Foundation and DACOR Visiting Professor of Diplomacy, Career Minister (Ret.) Ambassador Katherine Canavan, arrived and spent a few minutes with the trustees speaking about her experiences as a Foreign Service officer and her participation in the program during her weeklong visit Dec. 2-6, 2019.

The first order of business the board conducted after Chairman Mike Hockley called the meeting to order was the election of two new trustees. Retired Army Colonels Robert Naething and Pat Proctor were both unanimously approved as trustees for their first three-year term.

“We’re extremely proud to welcome Bob and Pat to our board,” said Foundation President/CEO Col. (Ret.) Roderick M. Cox. “Both have service at Fort Leavenworth in their uniformed experience and have undergone the same training, education and combat experiences as the students we support and the leadership with whom we interact. They each offer unique knowledge and skills that will contribute to advancing our mission, enhancing CGSC and helping military families. Their willingness to serve on our board is a testament to their dedication to the development of the next generation of leaders for our military services.” 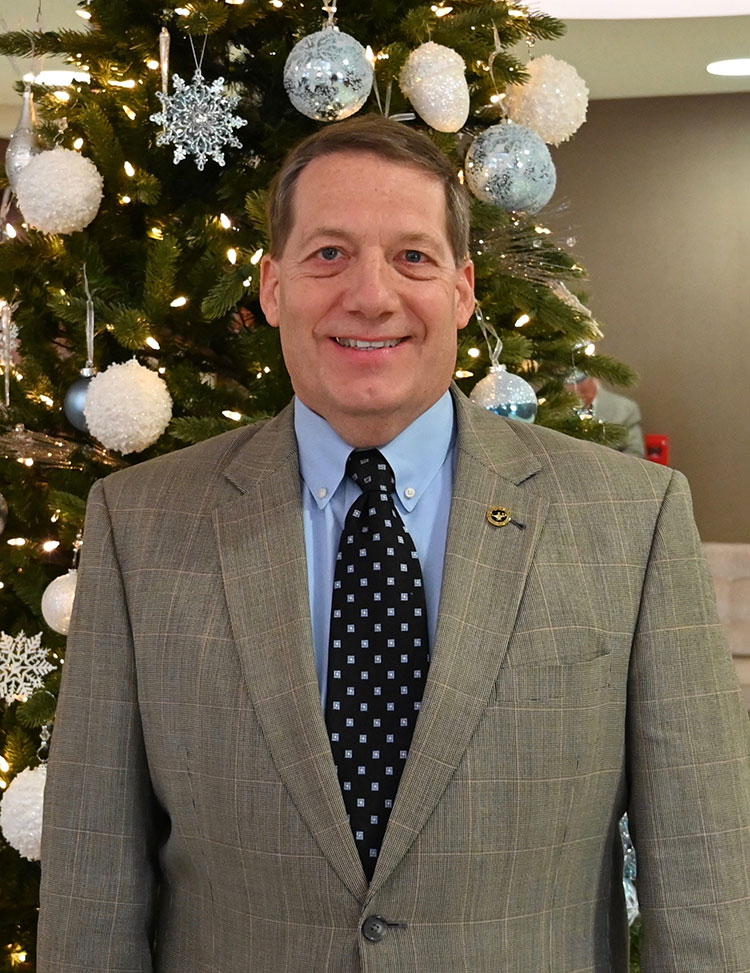 During his uniformed service in the Army, Naething was an armor officer with multiple command and staff assignments in the 2nd Armored Division, 3rd Armored Division and 4th Infantry Division. He served as brigade commander of the 16th Cavalry Regiment and also commanded two groups in the Battle Command Training Program at Fort Leavenworth, during which time he deployed in support of operations in Iraq. During his career he also served as an assistant professor of history at the U.S. Military Academy at West Point.

Naething received his bachelor’s in biological sciences from Southwestern Oklahoma State University, his master’s in history from the University of Illinois at Urbana-Champaign, and a master’s in strategic studies from the U.S. Army War College. He is a graduate of the Command and General Staff College as well.

Naething resides in San Antonio, Texas with his wife Cindy.

Colonel (Ret.) Pat Proctor, Ph.D., is an assistant professor in the homeland security program at Wichita State University. He is also the co-owner, of Baan Thai Restaurants, a Kansas corporation with locations in Leavenworth, Lawrence, and Manhattan. 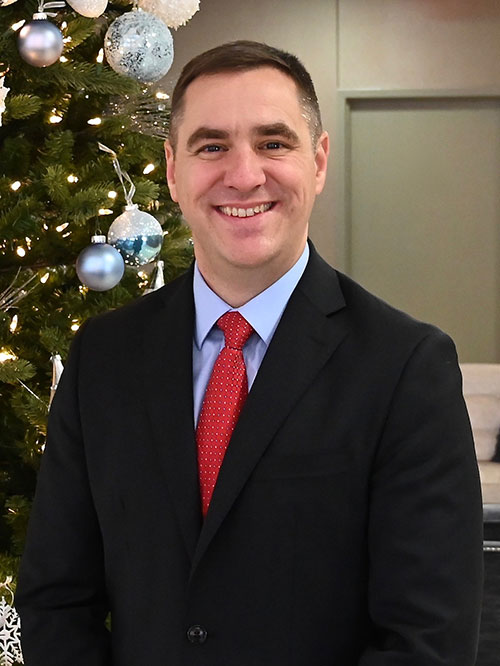 Proctor is a retired field artillery officer with more than 25 years of service, including the wars in Afghanistan and Iraq. In 2007, he was selected to work in Iraq as part of a handpicked, twenty-man team of soldiers, scholars, and diplomats led by Col. H. R. McMaster and commissioned by General David Petraeus and Ambassador Ryan Crocker to create a new strategy for the war in Iraq. Proctor worked with a U.S. State Department counterpart to write the strategic communication plan for what has since become known as the Iraq “surge.” During his career he served in command and staff positions from Fort Hood, Texas, to Schofield Barracks, Hawaii. He most recently deployed to Jordan, on the front lines of the war on The Islamic State in Iraq and Syria (ISIS), and as the commander of the Gunner Battalion (4th Battalion, 1st Field Artillery). Proctor also served as a chief of operations group at the Mission Command Training Program (MCTP) at Fort Leavenworth, training the U.S. Army’s functional and multi-functional brigades.

Proctor is a prolific writer and is the author of three books and coauthor of another, and has written numerous articles for publications such as Parameters, the Historian, and Military Review, among others. He holds a doctorate in history from Kansas State University, a master’s in strategic studies from the U.S. Army War College, a master’s in military arts and sciences from CGSC’s School for Advanced Military Studies, and a third master’s in military arts from CGSC’s Command and General Staff Officers Course. He received his bachelor’s in mechanical engineering and was a Distinguished Military Graduate from Purdue University.

Proctor lives in Leavenworth, Kansas, with his wife Aree.